University Libraries are proud to welcome CELIA‘s Night at the Movies, part of the A Long, Long Way: Echoes of the Great War program, showing:

Free and open to the public.
Complimentary soda and popcorn! 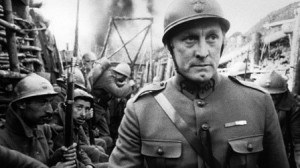 Synopsis:
Directed by Stanley Kubrick, 1957.  WWI commanding officer General Broulard (Adolphe Menjou), orders his subordinate, General Mireau (George Macready), to attack a German trench position, offering a promotion as an incentive. Though the mission is foolhardy to the point of suicide, Mireau commands his own subordinate, Colonel Dax (Kirk Douglas), to plan the attack. When it ends in disaster, General Mireau demands the court-martial of three random soldiers in order to save face. Read more…

This Sunday marks the 9th Annual Dayton Literary Peace Prize awards, which are the first and only annual U.S. literary award recognizing the power of the written word to promote peace.

Wright State has a proud history of participation in the awards, as Dr.  Carol Loranger, Ph.D., chair of the Department of English Language and Literatures serves the Peace Prize steering committee and the selection committee for the Holbrooke Distinguished Achievement Award.

Recognizing the need to showcase a variety of works related to the Peace Prize, Dr. Loranger worked with University Libraries’ Digital Services department to create a collection in CORE Scholar compiling the works of the winners and honorees. CORE Scholar is Wright State University’s institutional repository, dedicated to collecting the scholarly output of the University as well as local, regional and WSU heritage material.  For more information about Digital Services’ involvement in the Peace Prize collection, check out their blog, Knowledge Exchange or explore the collection at: http://corescholar.libraries.wright.edu/dlpp/.

Want a treat that won’t give you cavities? Like surprises?
Time for Trick-or-Treat with a Book!

Brought to you by the Friends of the Libraries.

With a few options at our Popular Reading Collection and a full display on the 2nd floor near the elevators, you’re sure to find your next great read. Don’t worry about judging a book by its cover, because this time you can’t. They’re all wrapped up and waiting for you, so come read our clues and pick your Trick-or-Treat with a book. Read it and return your completed evaluation form to the Circulation Desk by November 20th and you’ll be entered to win a prize. One entry per book, so start reading! 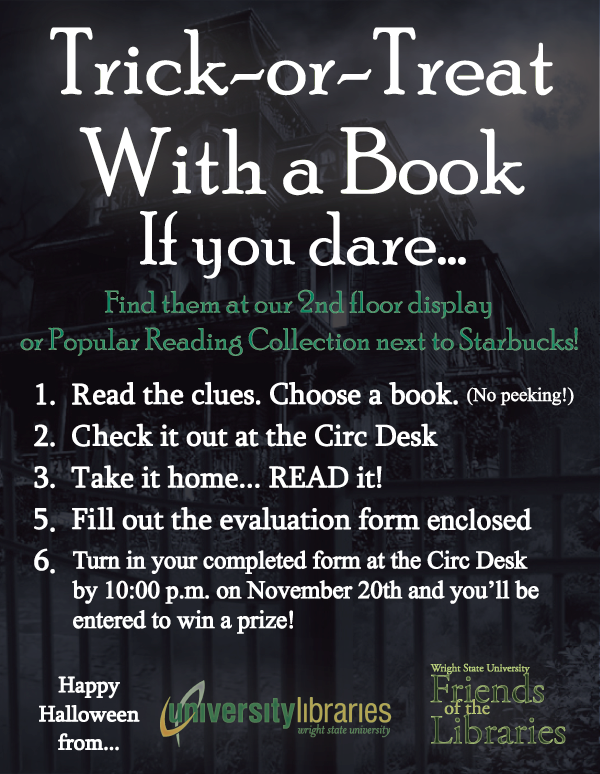 The Wright State University Libraries, the Friends of the Libraries, and Digital Services invite you to the Wright State University/Cleveland State University Joint Open Access Symposium. This event will feature speakers on the topic of copyright, open access, and open data, with a Keynote presented by Dr. Caroline Whitacre, VP for Research at The Ohio State University, who will speak about the SHARE (SHared Access Research Ecosystem) Initiative on which she is a steering group committee member. SHARE, born out of the White House initiative calling for the free and open sharing of publicly funded research, is a steering group that pulls together stakeholders from the research community to guide policy and build the infrastructure for storing, preserving, and sharing research and data.

View the symposium schedule and feel free to drop in and out throughout the day. To view Ann Taylor and Caroline Whitacre remotely, go to http://www.wright.edu/streaming.

This event is free to attend for Wright State Faculty and Staff. Refreshments will be provided. Contact Jane Wildermuth with any questions.