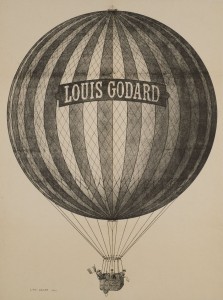 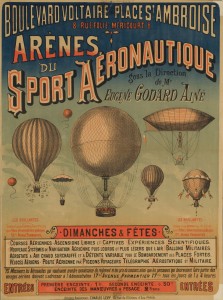 In France, by the late nineteenth century, color lithography was seen as a new art form and sustained by a proliferation of dealers, printers, critics, etc. Devoted more and more to commerce and advertising than it was purely to art for art’s sake, lithographic posters helped blur the lines between high and low art, and popular culture and high culture.  They were highly artistic while at the same time easily reproduced and commercial.

At this same time, ballooning was quickly becoming a recreation for young aristocrats. Louis Godard, a famous French balloonist, was well positioned to profit from this.  He set up shop and trained these moneyed amateurs until the start of World War I.  Godard was part of a family dynasty of aeronauts who performed prolifically in the late nineteenth and early twentieth century.

The image publicizing the Eugene Godard event was created and printed by Charles Levy, the lithographer whose name appears at bottom.

The other image of the single balloon with Godard’s name at center was done by Vadot, another famous lithographer of the day.

If you would like to purchase one of our fine lithographic prints please go to http://www.libraries.wright.edu/support/store/inventory.php.