One of the most iconic photographs in American history was taken by photographer Joe Rosenthal 67 years ago today. The flag raising at Iwo Jima is a profound photograph, but did you know there is a connection to Dayton, Ohio? 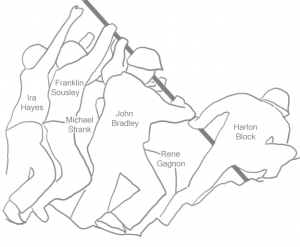 Second from the left is a gentleman named Franklin Sousley. Sousley was born in Hilltop, Kentucky, in the fall of 1925. By the age of 9, he had already lost two siblings and his father, and took on many of the responsibilities of helping his mother support the remaining family. Graduating from high school in 1943, Sousley moved to Dayton, Ohio, to take advantage of the many industrial positions available in the war-time economy, ending up working at a refrigerator factory, Frigidaire. Later that same year, when he turned 18, Sousley received his draft notice and decided to become a Marine. That decision would eventually land him on Iwo Jima. Within a month of that photograph, however, Sousley was killed on Iwo Jima, at the age of nineteen. Originally buried on the island, his body was relocated back to his home state of Kentucky in 1947. For more information about Sousley, we suggest reading Ron Elliot’s article, “Franklin Sousley and the Fight for Iwo Jima,” published in the Journal of Kentucky History and Genealogy, or the marvelous book by James Bradley, Flags of our Fathers.

Because of his connection to Frigidaire, we are proud to have a framed copy of the Iwo Jima photograph proudly displayed in our reading room, thanks to the generous donation of it by the Frigidaire TOM (Tired Old Men) Club. We also are fortunate to hold records from both the Frigidaire Company‘s Dayton years and the Frigidaire TOM Club. Come see the photograph and explore this piece of Dayton’s history.