To Vote But Not to Drink 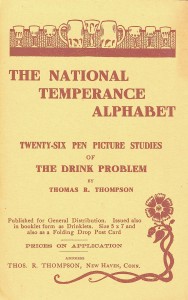 Born April 6, 1838, Martha “Mattie” McClellan Brown lost both her parents by the time she was eight years old. Reared in the large family of a neighbor, Mattie received a good common school education and at the age of twenty, met and married a Methodist Episcopal minister, the Rev. William Kennedy Brown. The young couple shared an interest in many reform issues of the day including temperance and women’s rights. With her husband’s encouragement and support, Mattie enrolled in the Pittsburgh Female College in 1860. Graduating in 1862 at the head of her class, she was probably the first married woman to attend college as a boarding pupil. Mattie’s early married life reflected the migratory nature of the Methodist Episcopal ministry of that time as her husband filled a succession of appointments in western Pennsylvania and eastern Ohio. The first of their six children, Orvon Graff, was born in 1863; there followed Westanna (Wessie), Charme, Richard McClellan, Marie, and in 1886, Kleon Thaw.

Mrs. Brown began her temperance career in 1861 when she joined the Independent Order of Good Templars (I.O.G.T.), a fraternal organization modeled on the Masons and dedicated to the cause of total abstinence and state prohibition. During the Civil War, she began to build a local reputation by giving patriotic lectures, and in the postwar period, turned her considerable platform talents to the cause of temperance. By 1867, Mrs. Brown’s prominence within the temperance movement was on the rise and she was elected to the executive committee of the Ohio Good Templars. The Browns moved to a pastorate in Alliance, Ohio, in 1868 where Mrs. Brown was involved in many activities, including editing two newspapers, writing anti-alcohol pamphlets, lecturing widely, launching a movement to have temperance lessons included in the International Sunday School Series, and organizing a statewide symposium which drew to Ohio such noted temperance leaders as Neal Dow of Maine and John Russell of Michigan. In 1872, she was chosen Grand Chief Templar of Ohio, a post she held for two years.

In the winter of 1873-74, a grassroots temperance movement known as the “Women’s Crusade” erupted in western Ohio. Before it was over, thousands of women in towns across Ohio and the Midwest had gathered in churches, then marched into local saloons singing, praying and demanding an end to the liquor traffic. As Grand Chief Templar of Ohio, Mrs. Brown strongly supported the Crusade; she also quickly recognized the women’s temperance movement as a potent new force for the cause. At a statewide temperance rally in Columbus in February, 1874, Mrs. Brown was both a popular speaker and, along with such movement leaders as Mother Stewart, Dio Lewis and John Russell, helped form the Women’s Temperance Association of Ohio. In August of the same year while attending a summer Sunday school assembly at Lake Chautauqua in western New York, Mrs. Brown suggested to several other women that a national women’s temperance organization be set up. At a more formal meeting the next day, she was elected to a ten-member committee to implement the idea. Though others shared in the leadership, Mrs. Brown drafted the Plan of Work and the Call for a convention to be held in Cleveland in November, 1874. At that convention, the Women’ s Christian Temperance Union (W.C.T.U.) was founded, the most durable and powerful temperance organization in the nation’s history. Evidence suggests that Mrs. Brown wanted the presidency of the new organization, but her link with the Good Templars and her strong stand for woman suffrage worked against her; the post went instead to the more conservative Annie T. Wittenmyer. Thereafter, Mrs. Brown took very little part in W.C.T.U. affairs. 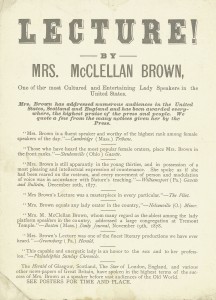 During later years, Mrs. Brown became very active in the Prohibition Party. Early in 1869 as a rising Templar leader, she played a part in founding an Ohio political party dedicated to prohibition, and was also present at the meeting of the Grand Lodge of the Good Templars in Oswego, New York in May, 1869, which laid the groundwork for the formal establishment of the national Prohibition Party. Her principal work for the party, however, did not begin until she broke with the Templars in 1876 over racial policy. As one of a minority faction favoring the admission of Blacks to I.O.G.T. Lodges, Mrs. Brown withdrew from the American branch of the Good Templars and joined with English delegates to form a more liberal body. After her resignation from the American Templars, Mrs. Brown was named vice-president and a member of the platform committee at the national convention of the Prohibition Party; she was also appointed to a four-year term on the party’s executive committee. Both Mrs. Brown and her husband fought hard for the inclusion of the woman suffrage plank in the party’s platform. In 1877, she moved from Pittsburgh (where her husband had taken a church the year before) to New York City to fill an unsalaried post as secretary of the National Prohibition Alliance, a lecture bureau with close Prohibition Party ties. For five years, while her husband and children remained in Pittsburgh, Mrs. Brown spent most of her time in New York. After serving two further terms (1884-86 and 1892-96) on the Prohibition party’s national executive committee and holding several posts at national conventions, Mrs. Brown left the convention of 1896 when it adopted a single-plank platform. thereby dropping its longstanding commitment to woman suffrage. After teaching for ten years as a professor at the Cincinnati Wesleyan Women’s College, Brown continued to remain active in the woman suffrage movement and the women’s club movement, continuing to lecture and write articles on temperance and on educational, literary and civic subjects. She died in 1916 at the age of seventy-eight.

The Papers of Martha McClellan Brown and Rev. William Kennedy Brown are a rich source of primary materials for research relating to the American temperance movement, the women’s rights and suffrage movements, women’s education, Methodism, and Spiritualism. The collection also provides an interesting look at a unusually egalitarian 19th-century marriage.

One Response to To Vote But Not to Drink