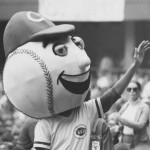 Did you know Dayton’s baseball history can be traced back into the 1880s? While you’re waiting those last few hours before opening day of the 2012 baseball season, take a few moments to learn about the incredible history of professional baseball here in Dayton.

One of the best places to start is with MS-401, the Todd Hollst Baseball Collection. Todd Hollst, a native of Beavercreek, Ohio, is an avid fan of Dayton baseball history. His love of baseball merged with his work when he became the first director of entertainment for the Dayton Dragons Professional Baseball Club. He has also contributed to a web site on Dayton Baseball History. His collection here in Special Collections and Archives contains some amazing artifacts on the legacy of baseball in Dayton.

Here’s a chronology of professional baseball teams in Dayton from 1884-2000:

Also, be sure to check out the terrific information and photographs from previous opening days of the Cincinnati Reds on our Dayton Daily News blog!