New Exhibit: Dayton’s 1913 Flood according to the Neukom Family 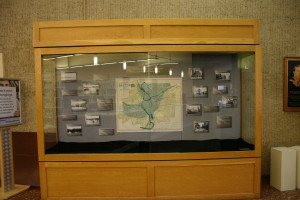 On Friday, March 1, WSU Special Collections & Archives installed a new exhibit in the Alumni Case on the first floor of the Dunbar Library (near the brand new Circulation Desk & the elevators). The exhibit, Dayton’s 1913 Flood According to the Neukom Family, includes materials created by one local family, the Neukoms, who lived through Dayton’s Great 1913 Flood.

During the 1913 flood, Edward and Nellie Neukom, along with son Everett (age 20), lived on the high ground in Dayton View, about 2 blocks from the Great Miami River. Although their home was not flooded, they suffered other effects of the flood, including a lack of supplies, utilities, and communications. Everett, a photographer at Delco, took several flood photographs, which he duplicated and sold. Edward and Nellie wrote letters to family telling of the destruction and warning them not to try to visit.

You can see many of Everett’s photographs in this exhibit, as well as read snippets from some of Edward and Nellie’s letters. The exhibit also includes a large map on which a member of the Neukom family marked which areas were flooded (indicated by blue shading). 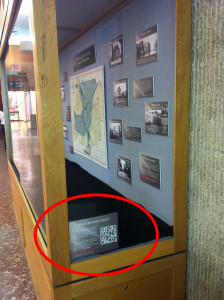 The materials shown in this exhibit are just a handful of the great 1913 Flood materials available in the WSU Special Collections & Archives.

In addition, more stories, letters, diaries, and photos of the 1913 Flood (from the Neukom family and others) will be available here on the Special Collections & Archives Out of the Box blog beginning on March 18th. You have already found the blog—but for those who might not have yet, we included a handy QR code right on the exhibit that will take people right here to the Out of the Box blog to learn more about the flood.

Here is a sampling of some images shown in the exhibit (click on an image to enlarge it):

You can see the Dayton’s 1913 Flood According to the Neukom Family from now until June in the Alumni Case (near the elevators & circ desk) on the first floor of the Dunbar Library. For more information about the Neukom family’s experience during the 1913 Flood, tune in to the Out of the Box blog starting March 18th for more excerpts; or, visit the Special Collections & Archives on the fourth floor of Dunbar Library and ask for MS-90: Everett Neukom Papers & Photographs.

One Response to New Exhibit: Dayton’s 1913 Flood according to the Neukom Family