Edward Neukom to his brother- and sister-in-law Tom and Evelene in Pennsylvania:

“Dear Evelene, Tom and the rest.

“The worst of the flood is over and also of the fires. The 5 days Thunderstorm wound up into a Snowstorm, (another example of the beautiful magnificent strictly American patented Climate). Nellie is the ministering Angel for the whole neighborhood, she baked over 20 loaves of bread to hand around, killed 4 of our biggest hens to feed 5 families, and it is killing to hear and see her boss the “[illegible]” neighbor women, those “flowers” of American society women who don’t know how to help themselves, let alone helping others. I make the hot water we need in the furnace, fortunately we have a ton of coke in the cellar. My particular lady friend Mrs. Scheuerman and her 2 little children were taken out of the 2d story window—by boat and brought to us, nearly frozen and pretty darned hungry too. All last night it was perfectly quiet, no R.R. trains, no waggons [sic], no Streetcars, no illumination whatever, except Candles & Lanterns, but we heard every 15 minutes the soldiers calling out “No. 1-12 o’clock, all is well” and then repeated along the lines, and quite a number of Rifle and pistol shots over town. Anybody making an attempt to enter a house at night is simply challenged and if he has not satisfactory explanation is shot!! Which is all right. Everett and I have a pass to go over all the town, thanks to Mr. Baker our neighbor. Isn’t it too bad the Trolley (Mrs. H. T. Garsed) was not here, she missed hundreds of funerals. One was buried yesterday in Mrs. Bolton’s front yard, your mother knows Mrs. Bolton all right. Everett sent 7 big pictures to Leslies Weekly yesterday, he went in an auto to Trotwood where R.R. connection to Richmond was made. Excuse my not paying for the telegram, no money was accepted because those who took the messages did not know the rates, and the R.R. Co. said they could not fool with money now, let them pay at the other end. I don’t know anything about our Shops, although I can see them with the Field glasses that they are standing still. 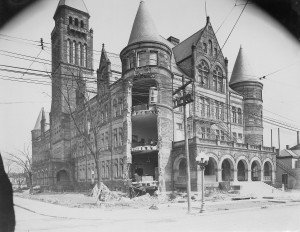 Do you remember the big Stone Building the Steele High School on Main Street (with Tower on it). Well, one whole side of the walls was carried away by the flood, it is almost inconceivable to see such havoc done by water. I believe it would pay Tom, from a professional point of view, to come here for a visit and see effects of floods on Buildings. There will be plenty of business for Building contractors this summer here. Well I must stop now, the whole gang upstairs is getting noisy, am writing this in my “nighty” on the way upstairs from attending the furnace. Will send you newspaper when we can get them again—I think in a week or more. Have not seen a newspaper for 5 days. Well, good by. I don’t know yet when I am going to mail this but I’ll find a way somewhere.

“Eight women were brought in to the Schoolhouse back of us confirmed with premature Births brought on by fright.”

With his pass to get into the disaster-struck city, Everett was able to enter downtown Dayton to snap these photographs on March 28, 1913: 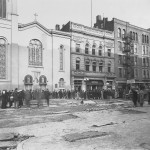 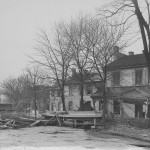 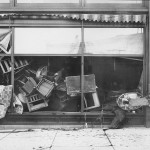 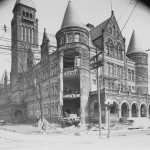 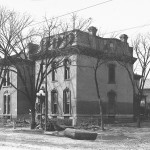 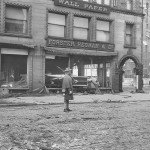 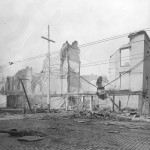 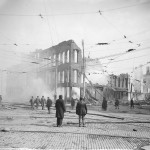 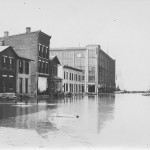 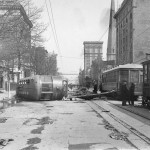