“Still have very bad cold. Rained most of day. AES attended to work at house. She & Georgie are cleaning up the furniture doors windows etc. are swelled very much so they can not be closed. AES & I went to bed at 8:15 PM.”

Nellie Neukom to her daughter Lisetta in Michigan:

“My dearest Lisetta & home folk!… No one allowed outside the house for anything after 6:30—The first nights the men & older boys took turns guarding Dayton View & when the Soldiers took charge it was like a battle (?) all night shooting anyone who was in a street or alley. 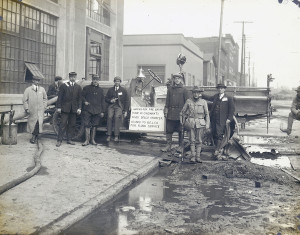 Fear of fire and inaccessibility of fire engines (such as this Delco fire truck) was a serious concern during the flood (ms128_1-7-4).

You see there was stealing & the most dreadful fear was fire (perhaps so as to loot) & there was no water to put out a fire & if there had been the only fire engine in Dayton View is on River St. & that street was too flooded for the engines to go out at all. Dayton View is all residence, except a very few small stores, and they were sold out very very early Tuesday a.m. Most people were caught short because it was market morning and all depend in market & the big down town groceries. We had enough provisions to last us more than a month—(except fresh meat & butter & perhaps such things that we did not have to have)—As soon as I saw the first glimpse of the Miami I sent Percy for that yeast cake & as I said before made potato yeast for all who wanted it & had flour & baked bread until the natural gas was gone & then had it baked any old place. Of course most all that bread was given away. About ½ [lbl.?] flour & I think about 50 loaves of bread. Then there was other cooking & “hearkening” every body who came near. We had strangers in & out all the time—From the first poor fellows (Edward knew them from the shops) who had to “swim” for it & they were as wet as rats—and—needed the whiskey we had in the house—(That bottle Edw. Bought for my (mincemeat to make it keep) in 1911—so you see there is none used (except for medicine in this house). Mrs. Shuerman (from near Geneva Switzerland & in America a little over a year) was in her 2d story two dreadful nights & three days. Dear little 5-yr Marguerite & 4-yr Walter with her. Mr. S. was on a trip for the Platt Co. & heard the news & Los Angeles Tuesday. He arrived Sunday. “The Bryans” are another story—Part of them in Baker part in Chandley—(on each side of us)—Many people to be fed—we killed some of our beautiful hens & had stew & soup by the washboiler full for the neighborhood. That soup will be history & funny history when I tell you how I made each [illegible] any old thing—went around the neighborhood with my market basket & I know that washboiler of soup fed well unto 100. “Louise”—Schantzs’ cook, made the soup—for the colored woman in the alley loaned them a gasoline stove. Harriet Schantz counted 60 they fed and had two bucketfuls that “Percy” carried about for me. (They were [scrubbing?] buckets too)—Am sure we got quite a share of dirt those days. Water was too precious to use—we drank rain water that fell from the roof into washtubs. For the cistern rain water had been standing too long to be safe when the water began to come through the faucets on Sat. I went to “smash.” 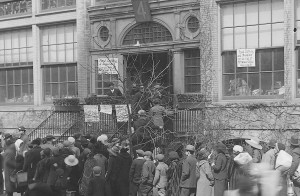 In addition to bread wagons, NCR provided assistance in its factory buildings as well. In this photo, a line of people await assistance outside Building 4 (cropped from ms128_3-3-7).

“Edward will be in Jamestown N.Y. until Friday or Sat. He left Tuesday. The Platt Co. will be glad to get the water works job he is after & he is better there than in the damp office—His office bld. was flooded & there is no heat & it is very damp there at present. Everett to “The Delco” every day. Everett Edward only to the office two days before he left for Jamestown—He took good care of me & cooked on a wonderful stove he rigged up in the on a wonderful stove he rigged up in the yard. Everett has a picture of him & that stove.”

Nellie Neukom to her sister Evelene in Pennsylvania:

“My dearest Evelene… I was oh so thankful [Lisetta] did not try to come home—For beyond the city limits I would fear for her safety. She was on my mind through all of this also fire. For no one saw more of fire danger than I am sure. I was in many places to cook I think some gasoline stoves must have been on the “dump” or in “damp cellars”. One had the flames lit—The gasoline was running out of the Tank doing the pipe & onto the floor.—Such things were in other places I am quite sure. Some people pulled bricks off the chimney—Made sort of a stove in a bath tub & burned the shutters or any old thing!! We had full & plenty of all we needed—But—every day heard more tales of sorrow—until I over flowed with it all. Am thankful to say I am O.K. Have slept naturally for 2 nights now–& sleep is such a blessing! Edward expects to be back from Jamestown N.Y. by Sat. He would not have gone except that I was so much better on Tuesday. Am glad he is away from the damp Platt office—(It was flooded & there is no heat there yet & the walk the long & dreadful over piles of debris, mud & slime)—Thank you for your letters—loving sympathy & all offers we need nothing! Please tell all friends—for—I cannot write much each day—thank them all & say I love them. Yesterday the banks rec’d $100,000 more deposits than withdrawals—Banks opened 8th & of course there were pay checks to be cashed that day. Edward brought home my usual “bunch” of bills. So do not worry about us. There are so many that I dare not think about them. But continue to help when we can—Your dear sister Nellie…”

Nellie Neukom to her husband Edward, away on business:

“My dearest Edward & My dearest home folk—Wrote before today… Likely you will see Edward soon. He has a partial set of Everett’s fine photos & it will be interesting for you to see them… Everett just “called up.” He calls up two or three times a day. He says the Delco Bld. is warmer today. It is fierce—cold & damp in most all the building & he has to be in cold water so much too. He does not complain ever but I am glad it is warmed there today…  Mrs. Neff (the little dressmaker) was here this a.m. & she has gone through a lot. She told me her shop is getting a gasoline stove—It is a story! She got it!… 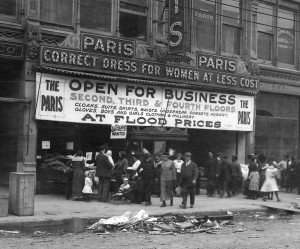 Stores like this one usually sold flood-damaged merchandise at a significant discount (cropped from ms128_3-4-3).

She came to report wonderful silk bargains over town $.25 per yd. wash silks 42 in. wide—like mens shirts are made of! But—I told her no silk–& no cheap muslin or anything of that order. Thanked her for telling me. She bought muslin & some of the wash silk ($1.25 value)—It was full of mud & had to be washed immediately—Her washed samples were beautiful—Likely she can re-sell some & make it up at a profit after awhile. The express man first brought a big box of Layton products from F. O. [Stockwald?]—He sent such a nice letter today. All friends have been good. Thank you for wanting us to come to “Old Farm Comfort.” I prefer to stay here. Our house is high dry & safe—water supply good. And—I want to feel quite well and able to “run” when I come on for a visit—Love to you all—from Nellie.” 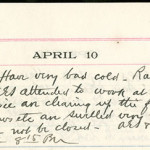