On June 7, 1863, William Patterson wrote his mother a letter from Tennessee.  In the letter he reports some good news.  On May 29, he received his commisson as a Captain and will likely be reassigned to Company H.  However, he will not mustered into the army as a Captain until the mustering officer receives approval from Washington, D.C.  He also writes a little about camp life, including the hanging of a soldier for killing a local man over money and the fact that the camp is filthy due to being in one location for so long.  He also notes that he is hopeful that he will be paid soon (he hasn’t been paid in 6 months) and that if he is paid, he will send some money home.  He closes with a comment about not hearing from Robert since the Battle of Fredericksburg and wonders why he doesn’t write.  (Transcript of William letter, June 7, 1863) 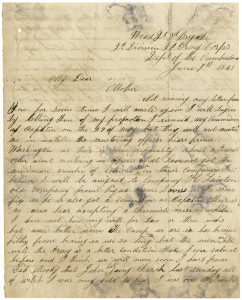 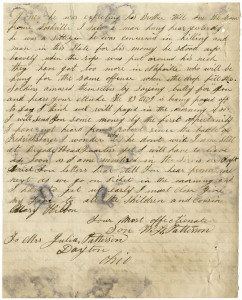