Upon creating Carillon Park in the early 1940s, Colonel Edward Deeds wished to reconstruct the original Wright Brothers’ 1905 Flyer in one of the park’s buildings. As Orville and Wilbur Wright had never produced a complete set of drawings or blueprints for any of their flyers, Deeds commissioned Louis P. Christman to complete not only a set of drawings for the 1905 Flyer, but also the 1900, 1901, and 1902 Gliders, and the 1903 and 1904 Flyers.

Louis P. Christman, (1893-1972), an employee of National Cash Register, worked closely with Orville Wright to produce an accurate set of drawings.  In creating plans for the 1903 Flyer, Christman traveled to the Smithsonian Institution in Washington D.C. to take measurements and make drawings from the original 1903 Flyer displayed there and later the Franklin Institute in Philadelphia to study, and trace, informal drawings the Brothers had done.  Back in Dayton, he then would discuss these notes with Orville Wright.

Continued meetings and conversations between Orville Wright and Christman resulted in a refined set of drawings of the numerous gliders and planes. Christman, under the direction of Deeds, then began the restoration of the 1905 Flyer in 1947, on the grounds of the National Cash Register Co. Final construction and assembly was completed at Carillon Historical Park, where the plane was reassembled and fabric was stretched. The plane is on display there today. 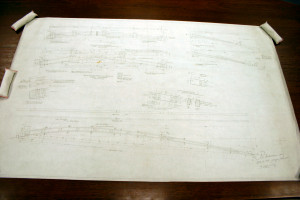 Here are some additional photographs of a few of the Christman drawings: 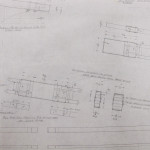 Close-up of the Support Rail Drawing. 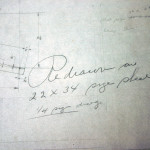 Engine Support Rails Drawing. Penciled notes say redrawn at 22 x 34, indicating that this is an original and that subsequent drawings were corrected for donation to the Smithsonian. 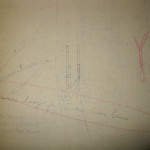 Detail of “safe” copy. Notations in Red are Orville Wright’s. 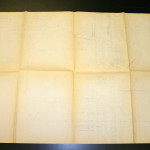 One of 23 “Safe” drawings of the 1903 Flyer. Called “safe” because originals were housed in a secure environment while notations were made on these copies.