On June 28, 1864, William Patterson reports to his mother that he is now in a Field Hospital near Big Shanty, Georgia, with what he calls “lumbago.”

During the Battle of Kennesaw Mountain, the IV Corps  assaulted the center of the Confederate lines.  William reports that the IV Corps lost 1500 to 2000 men in trying to take the enemies first line of works.  William observes that “we have lost a great many good officers and men in this campaign.  I hope it will soon end.  The Rebles think this will be their last hold and they fight desperate.  They seem to think their cause is lost if they dont hold Atlanta.”

William concludes the letter with noting that the hospital is well-supplied with food and sanitary goods.  They have plenty of rations, but he is concerned that “skirvy is breaking out among the troops and I am afraid it will stop the Campaign if it is not stopped.” 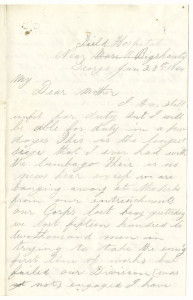 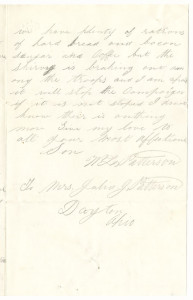