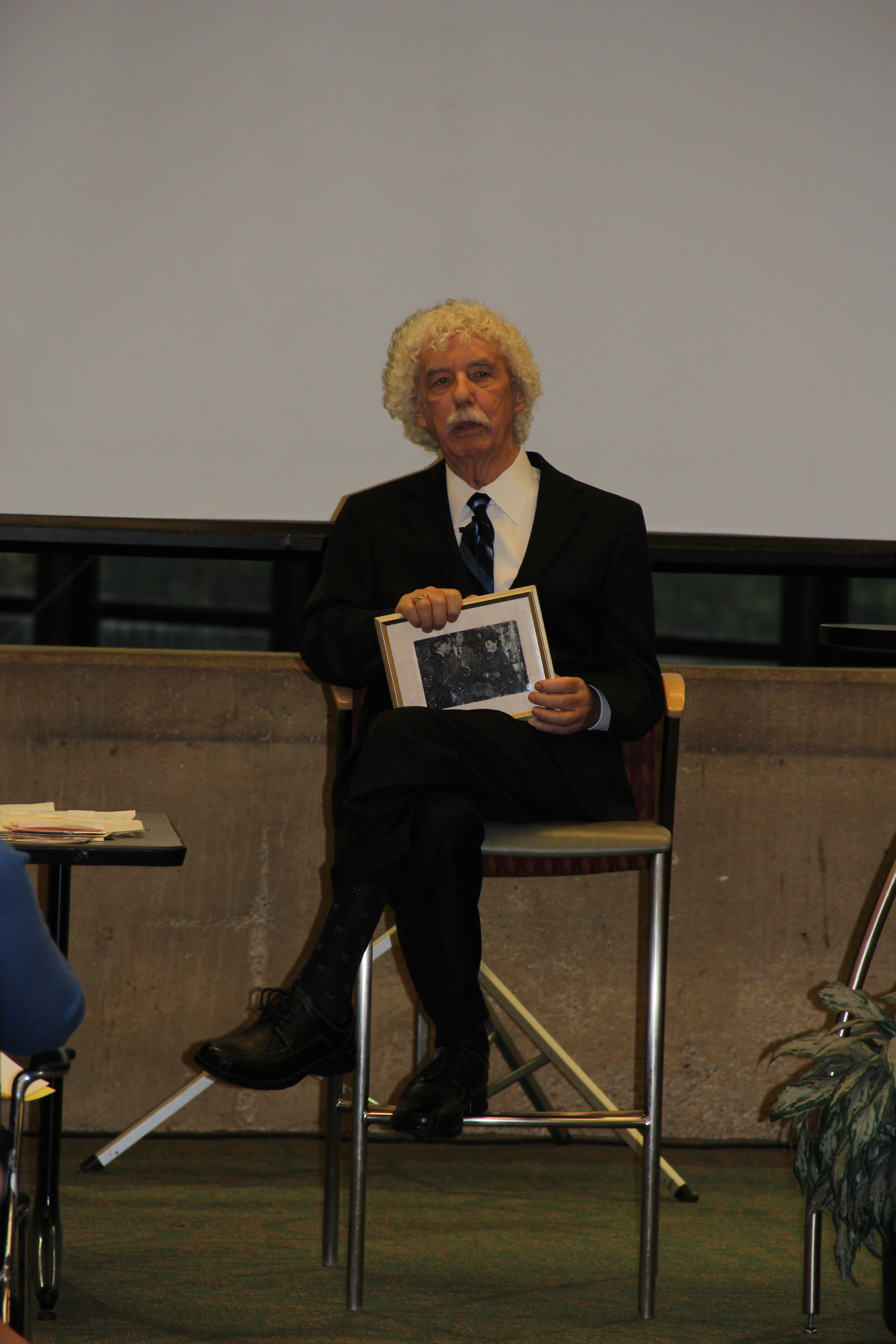 A crowd of approximately 150 people attended our fifth annual Living Legends of the Dayton Daily News Archive lecture on Friday, July 18, 2014. This year’s honoree was DDN columnist Dale Huffman, who has been sharing good news and happy stories from around Dayton since 1968. He has written for the Dayton Daily News for over 40 years, including a famous streak of over 3000+ consecutive daily columns from 1999-2008.

Several guests were already waiting outside the Dunbar Library when the doors opened at 6:30. Guests visited with Mr. Huffman and enjoyed exhibits and refreshments from 6:30 until 7:00. The exhibits featured photographs, awards, and documents about Mr. Huffman’s life and journalism career, all of which came from Mr. Huffman’s collection, which he recently donated to Special Collections & Archives. These exhibits included two large displays of enlarged photograph reproductions, one of which was a life-size cut-out from a photo taken while Huffman was on assignment reporting about the Three Mile Island disaster in 1979. There were also exhibits featuring materials from and information about the Dayton Daily News Archive itself.

The formal program began at about 7:10, as Dawne Dewey, Head of Special Collections & Archives, welcomed everyone and announced the grand opening of the Dayton Daily News Archive to public research requests.

Melissa Spirek, Chair of Wright State’s Department of Communication, gave a brief history of the Living Legends partnership and goals. This series is sponsored collaboratively by Wright State’s Department of Communication, College of Liberal Arts, and the University Libraries’ Special Collections and Archives. The Living Legends lecture series celebrates the Dayton Daily News Archive, an extensive collection donated to WSU by the newspaper. The lecture series was originally planned to take place for five years, this being the fifth year; it is now intended to continue for another five years.

Mr. Huffman took the “stage” at about 7:25. In his talk “From the Heart,” Huffman shared his personal recollections about some of his favorite stories with the group. The stories he covered included the story of Steven Lauterbach, a Daytonian who was one of the Iranian hostages; the 1974 Xenia tornado; his Calvin Klein “makeover” in 1980; going “back to school” at Huffman Elementary in 1981; and tales of pimento cheese, skydiving, and mystery kissers.

Mr. Huffman shared stories of his many encounters with celebrities over 45+ years as a journalist. He has personally met five U.S. Presidents, including Ronald Reagan and George Bush, Sr. He shared a fun story about a friendship with baseball player (and Dayton native) Mike Schmidt and how he and Schmidt’s mother have a long-running inside joke to call one another by incorrect names. He also told of a snafu he made on account of nerves when interviewing actress Judy Garland.

When Huffman finished speaking, he received an enthusiastic standing ovation from the crowd. He then took questions from the audience. Among these questions were:

Following the Q&A session, at about 8:15, Dawne Dewey, Melissa Spirek, and Mr. Huffman unveiled a plaque commemorating all the honorees of the Living Legends of the Dayton Daily News Archive lecture series. The honorees to date have been: Ty Greenlees (2010), Jeff Bruce (2011), Tom Archdeacon (2012), D. L. Stewart (2013), and Dale Huffman (2014).

After the program ended, guests were invited to visit with Mr. Huffman, look at exhibits, and have additional refreshments. The event ended at approximately 8:30.

A small selection of photos from the event can be seen in the gallery below. Click on an image to view it larger. If you would like to see more photographs from the event, please visit our Living Legends of the DDN Facebook album, which has about 100 photo. Additional updates can also be found on the Special Collections & Archives Facebook page or at #DDNLegend on Twitter.

Checking out the exhibits

Dale and Dawne with the life-size cutout

We could not have been more pleased with this year’s Living Legends of the Dayton Daily News Archive lecture, and we are looking forward to continuing the series in the future!