“A Day in the Life” of Special Collections & Archives: John Lennon and Abbie Hoffman 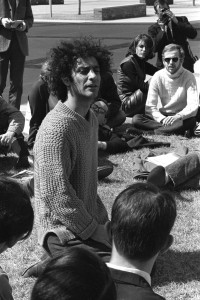 So our University Archivist, Chris Wydman, received a phone call a few months back in which the caller, a Wright State grad from the early 1970s, assured him that John Lennon had visited Wright State’s campus in the late 1960s, early 70s. After Chris cleaned up the coffee he had just spit all over his keyboard, he related to the caller that he had never heard any story of a visit to Wright State by a Beatle.

Chris knows much about Wright State’s history and has been the University Archivist here since 2005. He has interviewed countless original faculty members and has spent hours leafing through old university newspapers and other records. And never has he heard anyone EVER speak of John Lennon visiting WSU.

Why would Lennon come here in the first place? I’m sure Fairborn, OH in 1968-69 is just the place Lennon wanted to be. “Hmmm….let’s see…what to do today? Jam with the Beatles? Spend the day in bed with Yoko? Fly to New York? Maybe London? No no, I think I’ll go check out that new state university in Dayton.”

Chris and I had a good laugh over this story. However, when I walked back to my office and sat down, something struck me. On my office wall hangs a reprint of a photo of Abbie Hoffman at Wright State in 1969. I started thinking; “you know he and John Lennon became good buddies around 1969-1970, as Lennon’s political views became increasingly activist.”

So I thought “what if?” What if after befriending Abbie Hoffman, Lennon perhaps came on a few campus visits with him across the country? Since there is no record whatsoever of Lennon being on campus he would have had to have worn a disguise.   I know what you’re thinking now and you’re absolutely right; this is crazy talk. But you know you’ll be carefully examining the images in this post for Lennon in disguise.

And one last thing to further fuel the Lennon-Hoffman conspiracy I’ve created; nowhere in the March, 1969, issues of the Guardian is there mention of Abbie Hoffman’s visit. The pictures of the Yippie renegade below, however, are all dated March 17, 1969, were taken by WSU photographers, and clearly show him outside Allyn Hall talking with students.

One brief mention of Abbie Hoffman exists from this period in the May 19, 1969 issue of The Guardian, pg. 8, in the article “Dr. Edwards Suggests Alternative to Status Quo.” Enjoy! And remember, you can see many old issues of The Guardian at http://corescholar.libraries.wright.edu/archives_guardian/index.html. Also, learn more about old Wright State photos and history at http://www.libraries.wright.edu/special/university_archives/ .

Included as well in the following are images of other notable New Left figures who visited campus in the early 1970s. 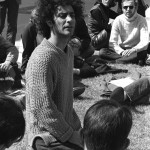 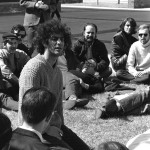 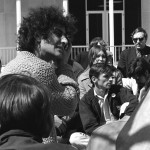 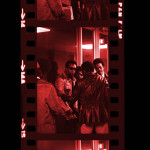 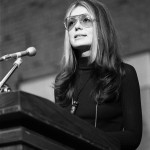 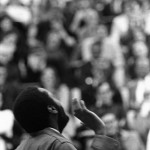 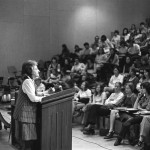 Betty Freidan speaks to WSU students in May, 1972.

This entry was posted in SC&A and tagged University Archives. Bookmark the permalink.