In this undated letter (estimated to be early August 1864) from Robert Patterson to his younger brother Stephen, Robert writes about life in the trenches outside of Atlanta.  In particular he notes that he had not received a letter for quite some time and had come to the conclusion that “you had all forgotten me” and that “nothing is looked for so anxiously as the mail and always feel disappointed if we do not get something in it.

Robert writes about several events in his letter.  First, General Hooker’s resignation from the Army.  Major General James B. McPherson, Commander of the Army of the Tennessee, was killed in action on July 22 during the battle of Atlanta.  General Sherman selected Major General Oliver Howard to replace McPherson, who was junior in rank to General Hooker.  Hooker submitted his resignation in protest, which was accepted.  Robert notes in his letter that the resignation was justified and he “would rather see him go than to submit to such gross injustice.”  He further noted that General Hooker was very popular with his men.  Second, Robert notes that they have been lying behind their fortifications outside Atlanta for 11 days with both sides shooting at each other night and day.  He also notes that they had “bad luck” with their cavalry under General McCook.  They were in the rear of the Rebel army destroying railroad track and telegraph lines, and had captured 500 wagons, when they were attacked and all but 200 men captured.

Robert closes his letter with “this being under fire all the time is about as exhausting on the men as marching” and since they have no way to wash they are very dirty. 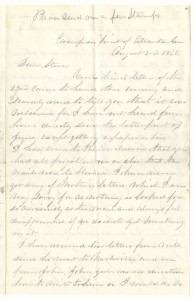 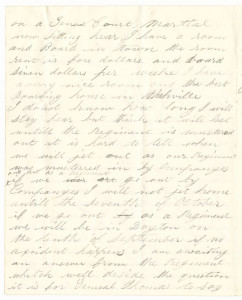 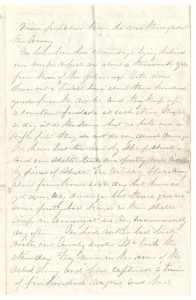 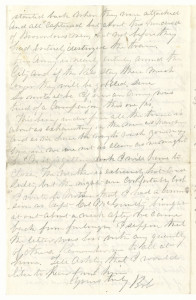