We are pleased to announce that the entirety of the 91st Observation Squadron, American Expeditionary Force, Photographs (MS-293) is now available online in CORE Scholar. This collection is just one of several World War I collections we hope to share online in the next few years, during the war’s centennial. 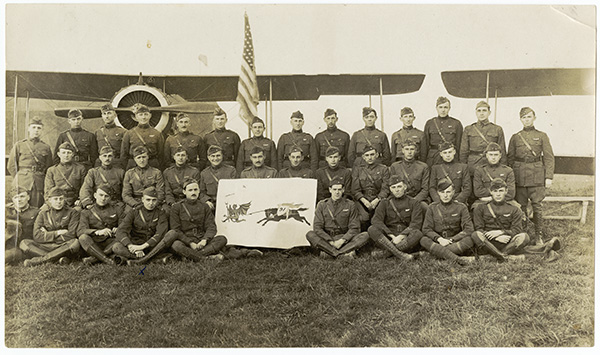 The collection includes 39 photographs dating between April 1918 and March 1919. This photos depict the airmen and operations of the Squadron during the end of World War I and the months following, including: airplanes and airfields, the men who served in the squadron, the squadron’s banner design, and aerial observation views of French and German cities and sites including Coblenz, Trier, Dierdorf, Bendorf, Sinzig, Blagny, and Carignan. 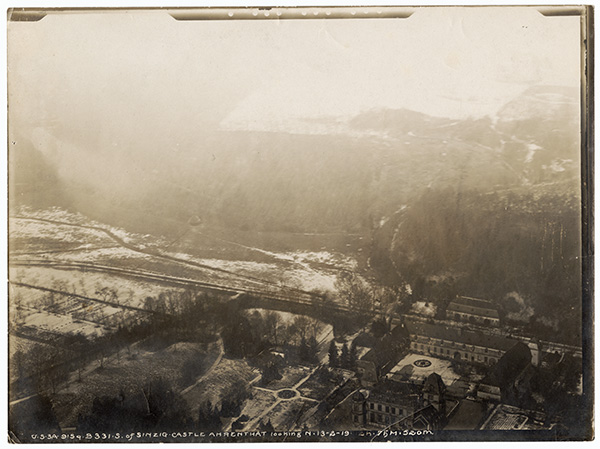 During World War I, the 91st Observation Squadron of the American Expeditionary Force operated reconnaissance missions 15 to 25 miles beyond enemy lines.  They informed A.E.F. Headquarters of movements on roads and airdromes and in railroad yards, which they observed from above 15,000 feet; they also reported on supply and ammunition dumps.

The 91st Squadron arrived in Liverpool, England with the 90th and 88th Squadrons in November 1917 and traveled to Hill 402 to construct an airfield next to the American Expeditionary Force Headquarters in Chaumont, France.  The squadron then traveled to Amanty, France where a school for pilots was operated.  However, flight training was delayed by the lack of adequate airplanes; well into 1918, only worn-out Dorand, Sopwith and SPAD aircraft were available for use.  Sixteen Salmson airplanes arrived by May of 1918, enabling the Squadron, with mediocre gunnery training, to begin operations.

The Squadron’s first mission into enemy territory occurred on June 3rd from their base of operations at Gondreville, France near Amanty.  The two-person crews of pilot and observer were subject to enemy aircraft attacks and anti-aircraft guns.  There was a high rate of death, disappearance and injury, particularly for observers in the last months of the war.  By the end of World War I, six pilots and three observers in the 91st Observation Squadron had become prisoners of war and three pilots and eight observers had been killed.  Twenty-one enemy aircraft had been eliminated.

From February 14 to September 15, 1918, Major John N. Reynolds led the Squadron.  In September 1918 Major Reynolds became Commanding Officer of the newly-created Army Observation Group, which consisted of the 91st, 24th and 9th Observation Squadrons.  Leadership of the 91st Squadron transferred to Lieutenant Everett R. Cook, who served as Commanding Officer until the Armistice.

On June 28, 1919 the 91st Observation Squadron was demobilized from active duty in Europe; it was remobilized on June 30 for duty in the United States.