“Going home not as strong”

In this August 7, 1864 letter, William Patterson reports to his mother that he is getting better each day, but is still not well enough to join his regiment in Chattanooga.  The 1st OVI has been relieved of duty at the front and is awaiting mustering out.  He notes that in accordance with General Orders from the War Department, the regiment will not be mustered out as a group, but as companies in the order that they were mustered in.  His company will be the last to go which will be about October 7.

William also writes about a letter he received from his brother, Stephen, proposing an investment opportunity for his loose money.  William basically says he doesn’t know what he is going to do when he gets home.

The last portion of the letter is interesting in his comment about the 1st OVI – “They are going home not as strong as when they marched away from Dayton.  Many a poor fellow has bit the dust in the last three years, but there is one consolidation, we have made as many of them go the same journey.” 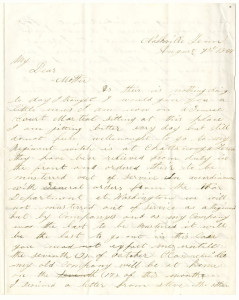 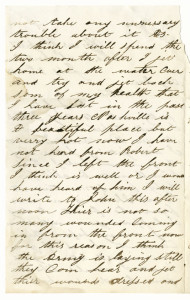 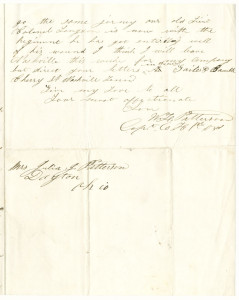