In this August 26, 1864, William Patterson writes his mother that he has “a little rather bad news.”  His unit has just received orders from Washington, D.C. that no more officers will be mustered out of service. He notes that half of the officers are already gone and the rest will have to stay in place until “the powers that be see fit to discharge us all.”  If he is required to stay on active duty, he speculates that he may be sent to Ohio and assigned to a new regiment that is now forming.

William notes that the decision to stop the mustering out of officers is pretty hard, particularly on those officers who had gone home last winter and got married.  In his case, he takes a philosophical view.  If he is killed or maimed, he “won’t begrudge the Country the services I have rendered it.  I have got all my papers pertaining to the Government all square up to this month and could go home in October with colors flying and also say that I have done my duty to the best of my ability.”

Finally, William reports he heard from Robert and he was  well  He also notes that his younger brother, John Patterson, is probably home now from his tour of duty in Washington, D.C. and that he hopes he will not be drafted to serve again. 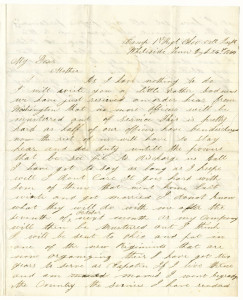 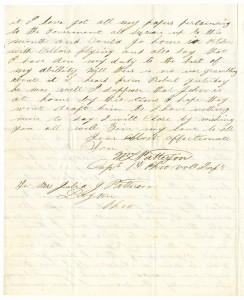