She is Dr. Colby’s daughter…

Yesterday’s 100-years-ago today diary posting from Bishop Milton Wright on our social media was as follows:

Lorin’s came to supper. Mr. Thresher and wife called in the evening. She is Dr. Colby’s daughter.

Diaries by their personal nature often record events and knowledge from their authors’ lives that have context and significance not always readily obvious to later readers.

Who is “Dr. Colby’s daughter” (aka Mrs. Thresher), and what (if any) significance is there that Bishop Wright thought it important to mention the woman’s father as a way of identifying her?

As it happens, the families of Thresher and Colby crossed paths frequently in Dayton’s history, so it was not difficult to positively identify these individuals:

This “Mr. Thresher” was Brainerd Bliss Thresher (1870-1950), who a few years later would become one of the founders of the Dayton Art Institute.

His wife was Mary Low Colby (1873-1933)—not to be confused with her grandmother, whose name was also Mary Low (Roberts) Colby. The younger woman, Mary Low (Colby) Thresher, who visited Bishop Wright with her husband in 1914, was the daughter of the Rev. Dr. Henry Francis Colby. 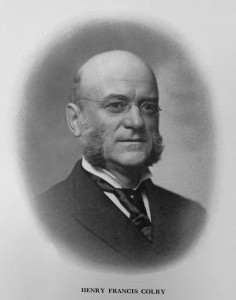 Rev. Dr. Henry Francis Colby (1842-1915) was a well-known and prominent figure in Dayton, Ohio, from the latter part of the 19th century until his death in 1915. He was minister of the First Baptist Church in Dayton from 1868 to 1903, when he retired due to ill health. He had first come to Dayton in 1867 to preach a guest sermon at the church and was subsequently offered the pastorate. He had come to Dayton at the invitation of Ebenezer Thresher, retired minister of First Baptist Church, founder of Barney & Smith Car Company, and a relative of the as-yet unborn man, B. B. Thresher, who would someday wed his daughter Mary.

We have quite a lot more details about the history of the First Baptist Church of Dayton—some of which, incidentally, was written by none other than Henry F. Colby—as well as biography about Colby himself, in our First Regular Baptist Church Records (MS-81). Colby also appears in a number of general histories of the city from that time period.

When Orville Wright died in 1948, his funeral was held at the First Baptist Church, of which he was apparently a member. However, his name does not appear in the membership log in the First Regular Baptist Church Records, which only goes up to 1920.

It is difficult to say precisely how the Colby and Thresher families and the Wrights knew one another. It seems likely that they came to be friends in any of the various ways that any of the prominent Dayton families of the time came to know one another: by running in the same social circles and having mutual friends, interests, business, philanthropy, etc.

It is also possible that Bishop Wright did not know Dr. Colby personally at all, but he saw fit to mention that his guest was Dr. Colby’s daughter in the same way that one might record the fact that the relative or associate of a celebrity or otherwise important individual had visited. Or perhaps they did know one another, as they were both clergyman, though in different churches: Colby being Baptist and Wright being United Brethren.

The Bishop does mention Dr. Colby by name later in his diary, following Dr. Colby’s death. This entry comes from the Bishop’s diary on May 8, 1915:

Doctor Henry Francis Colby died at 7:00 evening, aged 72 years. He was long pastor of the First Baptist Church in Dayton, and one of their best men.

The Bishop obviously thought highly of Dr. Colby, to record such kind words about him at the time of his passing.

2 Responses to She is Dr. Colby’s daughter…