The Bishop’s Comments on the 1914 Election

As you may have noticed, we’ve been sharing 100-years-ago-today social media postings from the diary of Bishop Milton Wright, father of the Wright Brothers. (You can see them on our Facebook page and on our Twitter @WrightStArchive under #MiltonWright.)

On November 3 and 4, 1914, the Bishop’s diary entries—which are usually no more than a couple of sentences (if that)—were a bit longer than usual and described (mainly) the 1914 election results:

Tuesday, November 3: There was an animated—I might say excited—election throughout the States. Gov. J. M. Cox was beaten in Ohio, by Frank B. Willis; Geo. G. Harding was elected U.S. Senator by popular vote; most of the northern states went Republican; the Republicans almost overthrew the Democratic majority in Congress. The Rosevelt [sic] (progressive) party negligible.

Wednesday, November 4: Captain Bristol and Lieut. Maxfield dined with us. News show that Penrose is re-elected Senator by Pennsi. Nich. Longworth is Congressman from Ohio and J. G. Cannon from Illinois. Home Rule prevails in Ohio, and Female Suffrage goes down with prohibition. I wrote to Mrs. M. M. Harvey and sent ten dollars on salary.

It must have been an “animated” and “excited” election indeed, because Dayton (and Ohio in general) experienced record voter turnout that year. 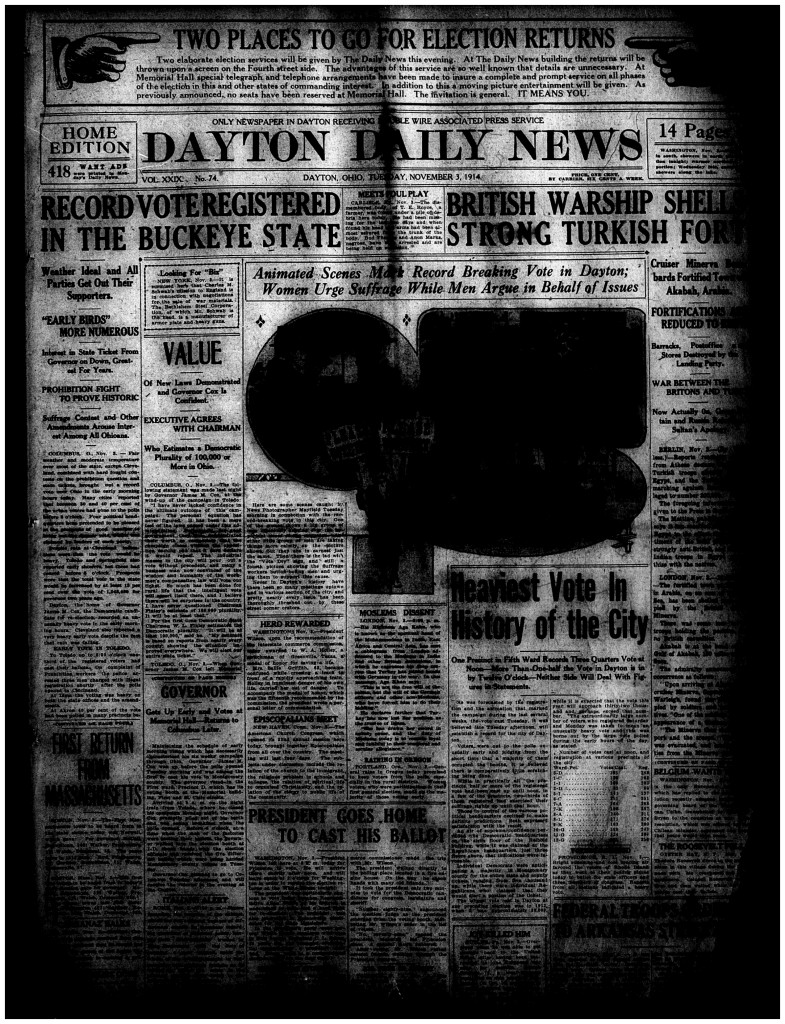 The Bishop makes reference to the defeated of the incumbent James M. Cox by Frank B. Willis in the Ohio gubernatorial race (which we have discussed previously here on the blog). A large number of voters in Cox’s hometown of Dayton did vote for him, but he did not receive enough votes elsewhere to secure the re-election. 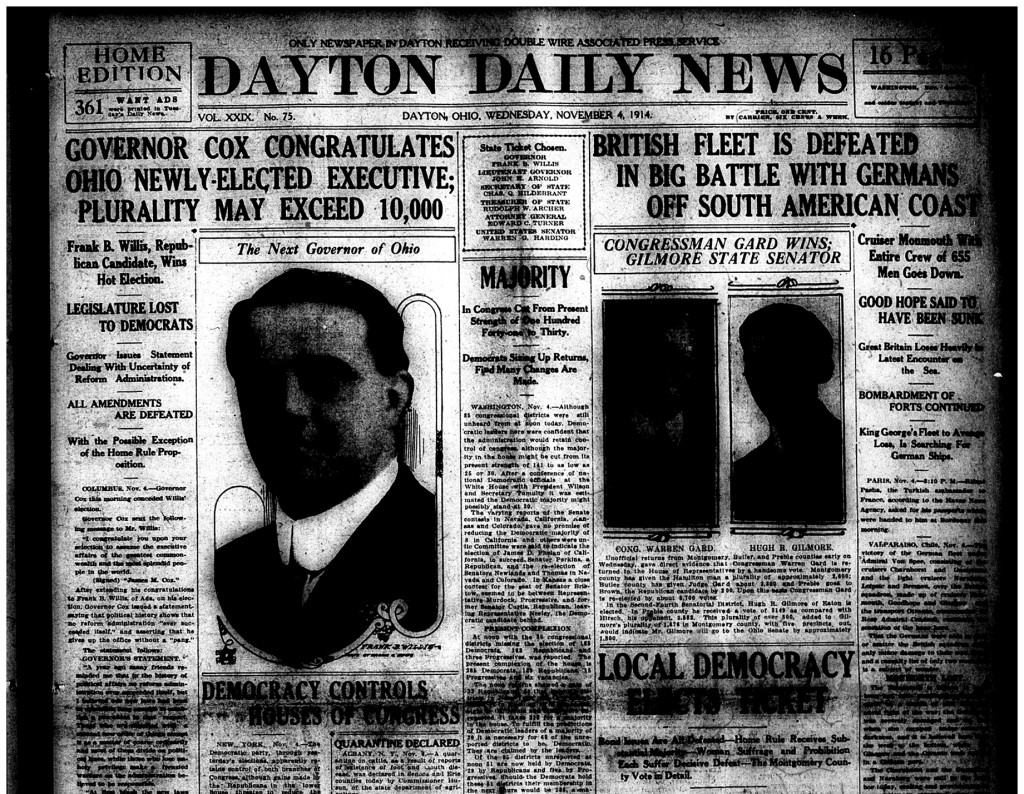 And “Geo. G. Harding was elected U.S. Senator by popular vote.” In fact, he means Warren G. Harding—perhaps you’ve heard of him? (Not sure where he got “George” from; Warren’s father did happen to be named George but was not a public figure. The Bishop probably just a random error in his entry.) Harding had been Lt. Governor of Ohio under Governor Myron Herrick from 1904-1906, served as Senator from 1915-1921, and moved directly from the position of sitting Senator to being the 29th President of the United States, serving from as President from March 4, 1921, until he died in office on August 4, 1923.

It also bears noting that Bishop Wright recorded that Harding was elected to the Senate by popular vote. The 17th amendment to the U.S. Constitution established direct election of U.S. Senators by popular vote, rather than by the state legislatures. Harding was the first Ohio Senator to be elected using this new procedure.

The Bishop observes a slight change in the Democrat/Republican split in Congress, then observes: “The Rosevelt (progressive) party negligible.” Prior to the 1914 election, the Progressive Party (former by Theodore Roosevelt in 1912) had 1 representative in Congress; after 1914, it had none, and the Progressives overall had not done very well in the election. The party dissolved entirely in 1916.

The Bishop writes a few notes about individuals elected:

(It’s interesting that he makes no mention whatsoever of the election of his own Congressional representative: Warren Gard won his first term as the Congressman from Ohio’s 3rd district, which included Dayton. Perhaps this was because Gard was a Democrat; the Bishop is clearly most interested in Republicans.)

The last bit of the Bishop’s entry is perhaps the most interesting: “Home Rule prevails in Ohio, and Female Suffrage goes down with prohibition.”

“Home Rule” refers to the Ohio Home Rule on Alcohol Amendment, or Amendment 1, on the state ballot in 1914. The amendment, if passed, would grant every city, village, and township the right to vote itself “wet” or “dry.” The measure was approved—by an extremely slim margin, receiving 50.5% “yes” votes.

A related but separate amendment on the subject of alcohol in Ohio, Amendment 4, would have enacted prohibition on alcohol sales entirely, state-wide. This measure was voted down, with about 54% of voters saying “no” to prohibition in Ohio. (Nationwide prohibition would later take effect from 1920 to 1933.)

The political ad below illustrates some additional details about what the Home Rule and Prohibition amendments entailed, albeit with some political bias! (They even provided a “helpful” diagram of how to fill out one’s ballot.) 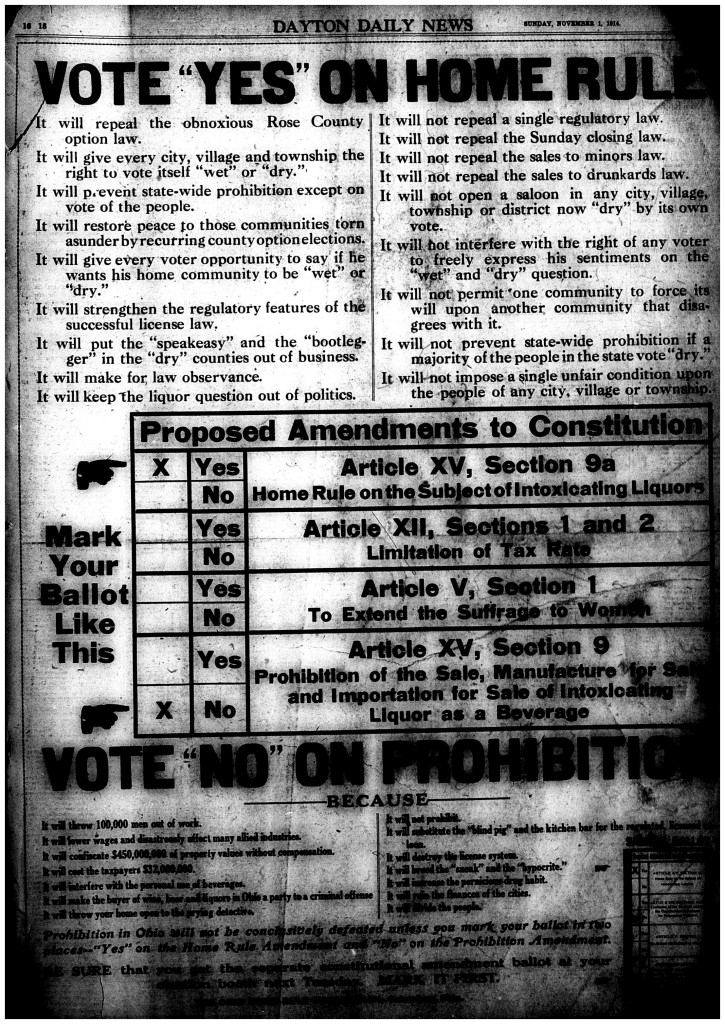 The reference to “Female suffrage” refers to Ohio’s statewide Amendment 3, the Ohio Woman’s Suffrage Amendment, which would extend voting rights to women in Ohio. It was defeated with over 60% voting “No.” A similar amendment was also defeated in 1912 (and by a similar margin). Women in Ohio would later be granted voting rights after the U.S. Constitution was amended in 1920 to provide female suffrage, and the Ohio constitution was amended in 1923 to conform to the new national law.

An item from the 1914 election ballot in Dayton that the Bishop did not mention was a proposed bond issue that would pay to raise the railroad tracks above street level, to eliminate grade crossings, in order to prevent accidents such as the one depicted in the political ad seen below: 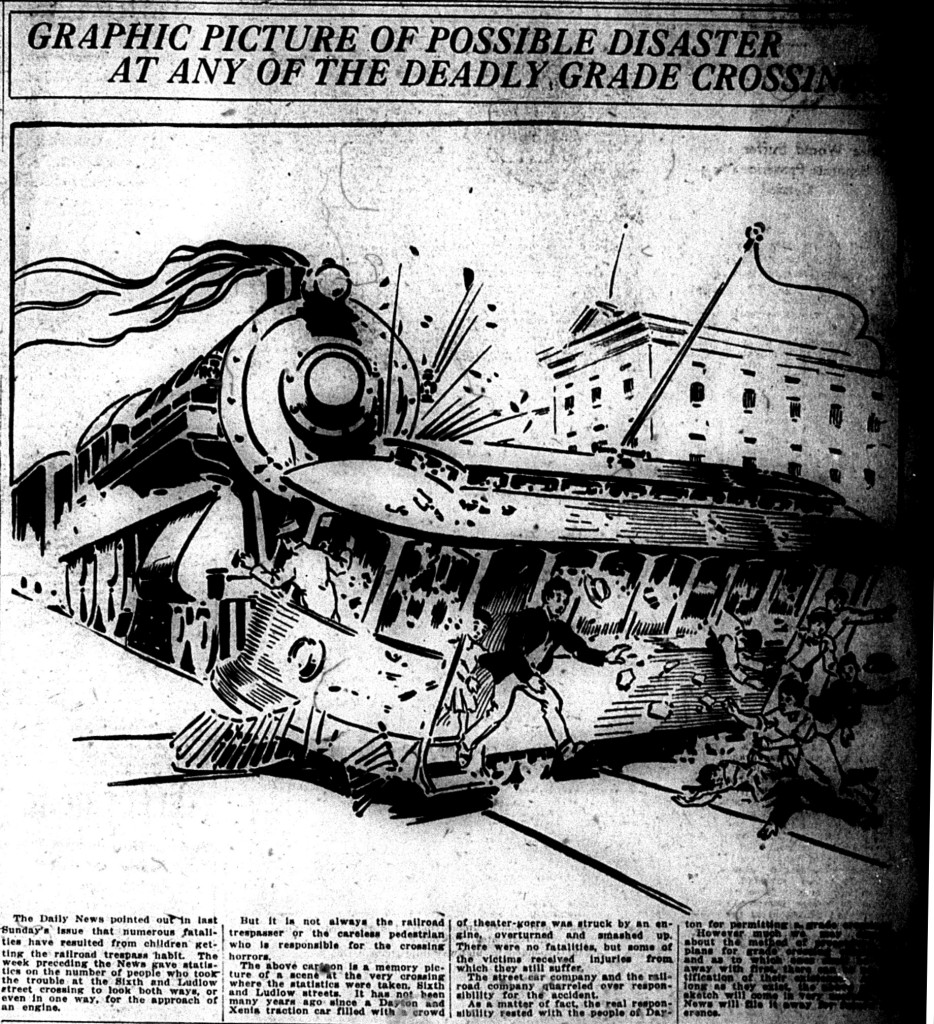 The Grade Crossing Elimination bond issue was defeated in 1914. Perhaps the majority of Daytonians agreed with these statements from the North Dayton Citizens’ League and City Manager Henry M. Waite, published in the Dayton Daily News on Nov. 2, 1914, that “now” was just not yet the time to focus on grade crossings:

Understand first, that we favor Grade Crossing Elimination in all sections of the city, provided the city is in possession of a complete plan, and after we have Flood Prevention.

…Mr. Waite said to our committee: “The city will not spend a dollar for elevated tracks until we get our flood prevention established.” He went further and said it would be an absolute waste of the people’s money to attempt any new improvements of such large character until we do have flood protection.

The city (and most of the Miami Valley) had just suffered its most horrific natural disaster in history the previous year—the now-legendary Great Flood of 1913—so it’s probably not surprising that citizens might have taken these sentiments to heart, to focus on flood prevention now, and raising the railroad tracks later. The Ohio Conservancy Act had been passed earlier in 1914, and in Miami Conservancy District was established in 1915 to fulfill the Miami Valley’s need for flood prevention.  The grade crossing elimination project, aka the raising of the railroad tracks in downtown Dayton, was eventually undertaken and completed in the early 1930s.

Below are a few more political advertisements and cartoons from the Dayton Daily News, in early November 1914, pertaining to the election. Click on an image to enlarge it. 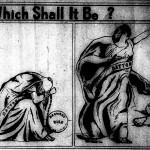 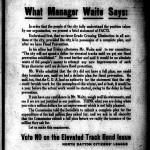 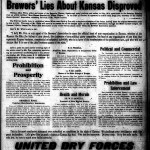 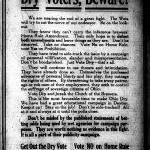 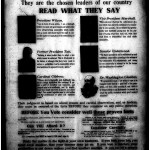 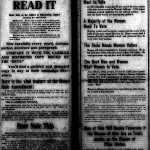 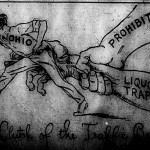 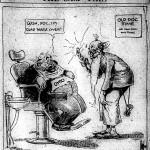 Isn’t it amazing how just a few lines in a diary can encompass so much?