On the Campaign Trail Again

On September 1, 1864, Atlanta, Georgia was captured by the Union Army.  Since that date, the Union Army has remained at Atlanta awaiting word on their next objective.

On November 8, 1864, Robert Patterson wrote a letter to his mother reporting that his regiment was preparing to move out.  Robert’s letter is informative.  He notes that General Sherman says that “War is Cruelty” and that he is “determined to make the Johnnys feel that it is so in every sense of the words.”  He goes on to note that General Sherman must be planning on opening communication lines through Savannah and Mobile and abandon the long railroad line to Chattanooga.  Robert anticipatesthat move to Savannah will be “a pleasant trip as the weather is mild and pleasant” and he does not expect “to meet any enemy at least no very large force and are expected to live off the country through which we pass.”

Robert closes with a note about the 1864 Presidential election.  The Union Army in Atlanta held their election that day and “had a close race with the Copperheads for a majority.  There were a number of hospital (bummers as the boys call them) loafers who never go into a fight voted at our polls and of course they are all McClellan men.  It seems a strange thing that a soldier would vote for that party.  I think there is no doubt but what Mr. Lincoln will be elected at least I hope so.”

This is the last Civil War letter from Robert Patterson in the Patterson family papers. 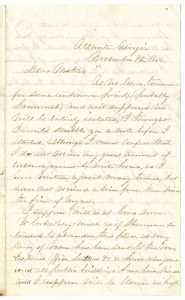 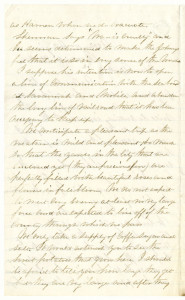 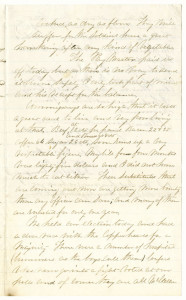 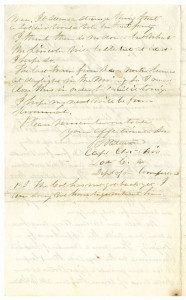