“The court decision in John H. Patterson’s case was announced…”

The court decision in John H. Patterson’s case was announced. To have a new trial. Orville, Kath., & Knabenshue went to the depot to see Patterson come in. There was a large crowd—8:00 evening…

To those in Dayton at the time, these few lines probably require little or no explanation. As you can see from this front page of the Dayton Daily News, March 13, 1915, the news about Patterson was a huge deal, worthy of almost the entire front page. (They held about 1/8 of the page aside for World War I & other news.) 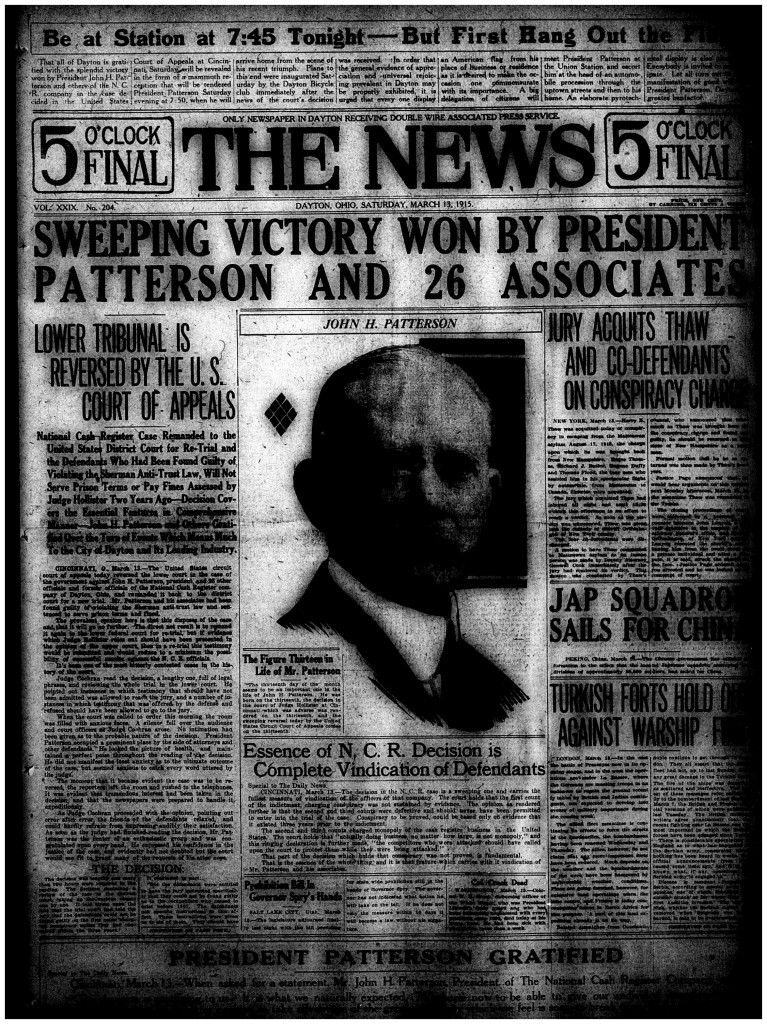 But 100 years later, after this hot scandal has cooled virtually to oblivion, a little clarification couldn’t hurt. Here’s the least you need to know to understand the Bishop’s entry:

In February 1912, the United States government filed two suits against National Cash Register under the Sherman Antitrust Act. One was a civil suit against the company itself, and the other sought criminal prosecution of NCR’s president John H. Patterson, vice president Edward A. Deeds, and more than 20 others.

National Cash Register controlled about 95% of the market for cash registers at that time, and the government charged that the company and its leaders were guilty of using unfair, unethical, and downright vicious practices to secure that market share.

On February 13, 1913, the jury of the U.S. District Court in Cincinnati handed down convictions to all but one (and it wasn’t Patterson). Patterson, Deeds, and most of the others were sentenced to fines of $5000 (plus court costs) each, as well as 1 year in jail.

Yes, jail. They were as shocked as you are.

They appealed the ruling, of course. Two years later, on March 13, 1915, the Sixth Circuit Court of Appeals overturned the ruling and declared that a new trial would need to be held if the case was to be pursued. It wasn’t, and the matter was dismissed entirely on February 1, 1916.

It is worth noting that in the time between the first conviction, February 1913, and the appeals court ruling in March 1915, Patterson, Deeds, and NCR in general had endeared themselves even more to the Dayton people than perhaps they already were, with their extensive work in flood relief and subsequent flood prevention efforts following the flood that devastated Dayton in March 1913.

An excellent source of information on the NCR/Patterson antitrust case can be found in: Roberta Sue Alexander, A Place of Recourse: A History of the U.S. District Court for the Southern District of Ohio, 1803-2003 (Athens: Ohio University Press, 2005), pp. 93+, available on Google Books.