Posted on September 9, 2015 by specialcollections

You are invited to the Great Wright Brothers Aero Carnival this Saturday, September 12, 2015, from 10:30 a.m. to 4:30 p.m. at the Huffman Prairie Flying Field. Everyone is invited to this free event hosted by the Dayton Aviation Heritage National Historical Park, National Park Service.

We will be there with an exhibit about the Wright Brothers’ activities at Huffman Prairie, including the tests and trials in 1904-1905 that made their airplane practical, as well as the Wright School of Aviation, where they trained U.S. military aviators from 1910-1916. 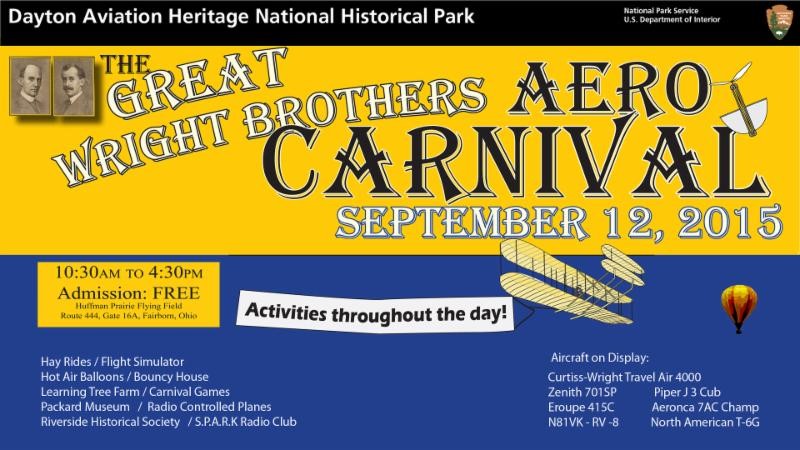 The Aero Carnival celebrates the general time period of the Wright brothers going from the 1890’s to the 1930’s and 40’s. The event showcases the work of the brothers in the development of practical flight and highlights some of the changes that have occurred since then. The event provides a fun way to explore the Huffman Prairie Flying Field, its environment, and the time period the brothers lived in. It also is a way for organizations with similar purposes to reach out to the general public. Huffman Prairie Flying Field is where Wilbur and Orville Wright turned their idea of powered flight into a practical, usable machine between 1904 and 1905. The Flying Field is where the brothers trained the next generation of aviators between 1910 and 1916 and today the area is part of Wright-Patterson Air Force Base.

Activities include bouncy houses and carnival games for the kids and a simulator of the 1911 Wright Model B airplane. There will be exhibits by a number of organizations and agencies from throughout the Miami Valley. There will be a silent film shown in the replica hangar along with commentary by Paul Glenshaw from the Wright Experience in Virginia. Seven static aircraft will be on display as well as a glider and hot air balloons. There will also be radio controlled model planes flying and sheep herding demonstrations.