It was on Jeopardy!

Last Tuesday I was watching “Jeopardy!” to cheer on Wright State senior Emily Bingham.  Not only was I excited about Emily’s impressive performance earning her a spot in tomorrow night’s semi-finals, but I was also excited that one of the clues showed this:

“View from the Window at Le Gras” by Joseph Nicéphore Niépce

The correct response was given and the fast paced quiz show continued…but I was still smiling over the first photograph in the world.  That photograph is 190 years old, and is at the Harry Ransom Center at the University of Texas – Austin  (http://www.hrc.utexas.edu/exhibitions/permanent/firstphotograph/) .  The photograph, technically called a heliograph, was made from a piece of pewter with a substance on it called bitumen.  The bitumen hardens in light.  The pewter plate was placed in a box called a camera obscura, which was set in an upstairs window overlooking the courtyard of Joseph Nicéphore Niépce’s estate in Le Gras, France.  It took at least 8 hours of exposure time for the image to be captured.  The year was 1826.

It wouldn’t be until 1839 (a whole 13 years later) that the world would have its first commercially viable photographic process called the daguerreotype, named after its inventor, Louis-Jacques-Mandé Daguerre (Daguerre had been Niépce’s partner until Niépce  died in 1833).  Can you imagine technology moving that slowly in today’s world?

The daguerreotype is a beautiful photograph made on a copper plate that is coated with a thin layer of silver.  The silver surface is highly polished, then sensitized with iodine fumes, creating a thin layer of silver iodide on the plate.  A follow up exposure to bromine fumes makes the plate more light sensitive, reducing exposure times from minutes to seconds. After exposure, the plate is developed with mercury fumes, resulting in silver amalgam particles forming the image.  The image is so fragile, it can literally be wiped away with a finger. The silver coating is also very susceptible to tarnishing and scratching.  To help protect the image, a brass mat and cover glass is placed over the image, held together with a brass preserver, and then placed inside a case. Hobbyists and a very few studios still make daguerreotypes today (http://www.thedaglab.com). 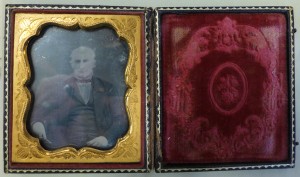 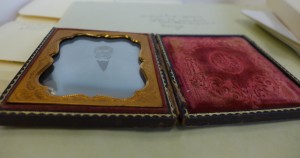 As you can see from this daguerreotype of Reuben Wallace from the Wallace Family Papers ( a wonderful collection documenting five generations of a farm family in Clark County, Ohio), the daguerreotype has a mirror-like quality, which makes it difficult to view at an angle.  The image is crisp and beautifully detailed when viewed straight on.  The exact date of this photograph is not known, but because daguerreotypes were prominent from their invention to about 1850 when a less expensive process called the ambrotype became available, we can narrow the circa date to 1840-1850.

What I love most about these beautiful photographs, is the direct tie they provide with a moment in time.  The photographic plate that I hold in my hand is the exact one that was in the camera facing the person in the photograph.

I’ll be watching and cheering on Emily Bingham this week during the College Semi Finals on “Jeopardy!”.  Niepce and Daguerre would surely be amazed over the invention of film and video capturing Emily’s momentous experience.  Good Luck, Emily!