In honor of Presidents’ Day, we’d like to share with you an account written by Civil War soldier Oscar D. Ladley, from Yellow Springs, about the review of troops by President Abraham Lincoln in early April 1863. Oscar served from 1861 until 1865 and was with the 75th Ohio Volunteers for most of that time, including the time of the review.

On April 12, 1863, Oscar wrote to his mother and sisters from Brooks Station, Virginia:

…Day before yesterday we were reviewed by President Lincoln & Gen. Hooker, with several other big Generals, viz. [Daniel] Sickels, [Henry] Slocum, [John] Sedgwick, [Daniel] Butterfield and any number of Brigadiers. We were, that is our corps, which is composed of three Divisions, commanded as follows 1st Ours, by Brig. Gen. McLean, 2nd Brig. Gen. [Adolph Von] Steinwher, 3d Maj Gen Carl Schurz. Each Regt. Was formed in Column doubled on the center Sub-Division closed in mass. Each Regt. Is composed of five divisions each division of two companies (see diagram).

The above represents our Brig. then on the right of this was the 1st Brig. then in the rear of us was the 2d Div and 3d Div drawn up in the same manner. In front of our center was Abraham and Suit[e] Hooker & Staff & c. He reviewed us, then we passed in Review that is wheel into column and march past him. It was a grand sight to behold, and was pronounced by those who see the other Reviews down at Falmouth to be the best of the season. The marching was splendid, the boys never looked better nor felt prouder. So they done their best. No doubt you will see it in the Illustrated papers, but that would give you but a faint idea of the scene. Mrs. Lincoln was there in a carriage. Also a young Lincoln [Tad], he rode with his father. It was a grand thing. I have seen our Corps reviewed but nothing like this. The day was fine which added to the display.

What an exciting day, to see the President of the United States in real life!

Click on the images below to read Ladley’s full, original letter. Or, read it on CORE Scholar. 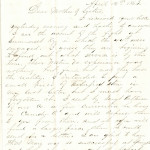 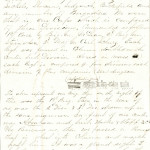 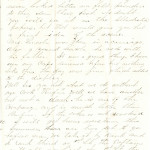 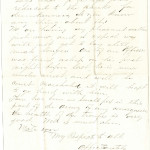 To read another account of Lincoln’s review, have a look at this article from the New York Times, April 12, 1863.

You can read all of Oscar Ladley’s Civil War correspondence in CORE Scholar, and don’t forget to check out the collection finding aid for more info and documents pertaining to the rest of Oscar’s life.