Posted on February 18, 2016 by specialcollections

Woodland Cemetery is just one of many local organizations whose history and records are preserved here at Special Collections & Archives. On this day, February 18, Woodland Cemetery celebrates the 175th anniversary of its founding! 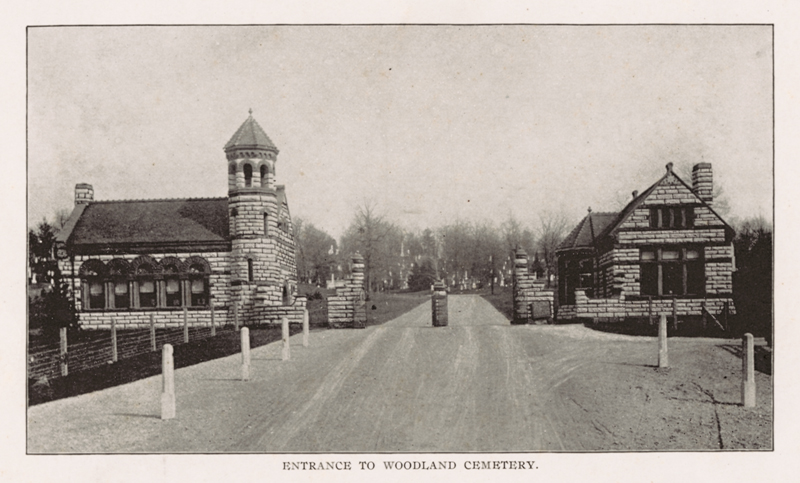 We are pleased to share with you the following information, which was provided by Woodland Cemetery:

DAYTON, OH – 175 years ago, on February 18, 1841, Woodland Cemetery Association of Dayton was created by the leaders of Dayton to establish a rural cemetery. The initial movement started in 1840 to address the diminishing amount of burial space in the city, and was led by John Van Cleve.  Van Cleve was tasked with finding a large area of land at a reasonable price to fulfill the future burial space requirements for a growing Dayton community.

Approximately one mile south of town, Augustus George had a large tract of land that had not yet been cleared of timber and was crisscrossed by steep hills and ravines, that he was willing to sell; forty acres in all, at sixty dollars per acre.  Van Cleve calculated that he would need fifty subscribers who were willing to invest one hundred dollars each, to form an organization, purchase the property, and still have money in the bank for labor and materials.

On February 27, 1841, John Van Cleve was elected President of the Association. A deed to the George property was received in April and work began on May 17, 1841. Van Cleve himself would see to the surveying, the platting, and the preparation of necessary business records. He would also author the Articles of Association to establish The Woodland Cemetery Association of Dayton.

The Woodland Charter was passed by the Ohio General Assembly on February 28, 1842 and adopted by the Association on April 10, 1842. Woodland Trustees gave public notice that the cemetery would be open for the sale of burial lots on June 7, 1843.  Prior to Woodland Cemetery, the first graveyards in Dayton were located at the northeast corner of Third and Main Streets, and 4 acres on south side of Fifth Street between Ludlow and Wilkinson.  Daniel Cooper donated this land for burial use but these grounds, while generous at the time, proved to be inadequate for the burials needs of the Dayton community.  In addition to donating land for the first two graveyards in Dayton, Daniel Cooper appropriately purchased the first lot, Lot 1 on June 7, 1843 at Woodland Cemetery.

The rural cemetery movement was a drastic departure from the early regimen of church burial grounds and was the forerunner of the landscaped, garden-style cemetery movement.  Landscape design, highlighting unusual features of the topography, use of the natural flora as scenic backdrops, curvilinear roads, and arrangement of burial lots in such a manner as to be easily accessible yet complementary to the whole were the principals to this movement. By 1867, the grounds of Woodland Cemetery attracted many visitors. It was the place to go for a Sunday stroll. There were beautifully landscaped areas: flowers, and ferns, and great iron urns filled with exotic plants and wire and wrought iron benches on which to rest and contemplate.

Today, Woodland Cemetery and Arboretum is one the most visited historical sites in Dayton. It is one of a few 19th-century rural garden cemeteries in America that continues to offer historical, educational and recreational resources in southwest Ohio and the nation. With over 108,000 souls entrusted to its care, it is the final resting place of many of Dayton’s most distinguished residents including the Wright brothers, Paul Laurence Dunbar, Charles Kettering and Erma Bombeck. The front gateway, chapel and office are on the National Register of Historic Places and 105 acres of the grounds have been established as a Historic District and placed on the National Register of Historic Places by the U.S. Department of the Interior.

Most recently, the cemetery was voted as Best View of Dayton in the Dayton.com Best of Dayton contest and received a Certificate of Excellence from Trip Advisor in 2015 for consistently earning ‘great’ reviews from visitors. Additionally, the Cemetery & Arboretum received two State Champion tree awards as designated by the Ohio Department of National Resources, Division of Forestry for recognition on the Ohio Champion Tree Register.

“Woodland Cemetery continues to be not only a beautiful and peaceful cemetery serving families of all faiths but a legacy to the city of Dayton and its history,” said Sean O’Regan, president and CEO of Woodland. “We offer families a beautiful park-like setting in the heart of Dayton and will to continue to serve the community for yet another 175 years. We hope that you will visit the cemetery and arboretum and take advantage of the beauty offered by Woodland, and join us over the course of this year to celebrate not only this milestone but celebrate the lives of those that made it great in Dayton.”