Recently, I read Pockets Full Awry: The Obrist Murder Case (2007) by Dick Burdette. The book describes the attempts of the authors and their associates to solve a more than 50-year-old cold case, one of the most notorious murders in the history of Portsmouth, Ohio: that of Dr. George E. Obrist, Sr., in 1947.

Much of the book centered on attempts to get to the bottom of long-standing rumors that the doctor had been murdered by a family member, including his wife Corinne and his son George, Jr. That was not a surprise – either that people might suspect close family members of involvement or that a large part of the book was dedicated to discussing it.

But I was surprised to read that later in life, George E. Obrist, Jr., had lived in the Dayton area (Bellbrook, to be precise). Small world, I thought.

Then, a bit later, it was revealed that Obrist, Jr., had been arrested for (and ultimately confessed to) robbing several banks in the Dayton area and elsewhere in the early 1960s.

Oh wow, I bet we have something about that in the Dayton Daily News Archive for sure, I thought. That’s definitely in the right time period to be included, and something like that would have certainly made it into the newspapers. I’ll have to check the Personality Files and find out if we have anything.

Before I even got around to checking the DDN Archive, I read this in the book (page 106):

Frank Kramer [one of the researchers] called The Dayton Daily News. A librarian said he would check the files. Five minutes later, he called back.

“I’ve found a file full of clippings,” he said. “I also found one with seven photographs of George Obrist, Jr., including one of the stolen money.”

(I was quite pleased that the researchers had thought to check the newspaper morgue. It would have been a real drag to find that we had materials they didn’t have access to when they wrote their book! Also, “the librarian” most likely refers to the former librarian of the Dayton Daily News, since this exchange took place in the early 2000s, before Wright State University Libraries, Special Collections & Archives, acquired the Dayton Daily News Archive.) 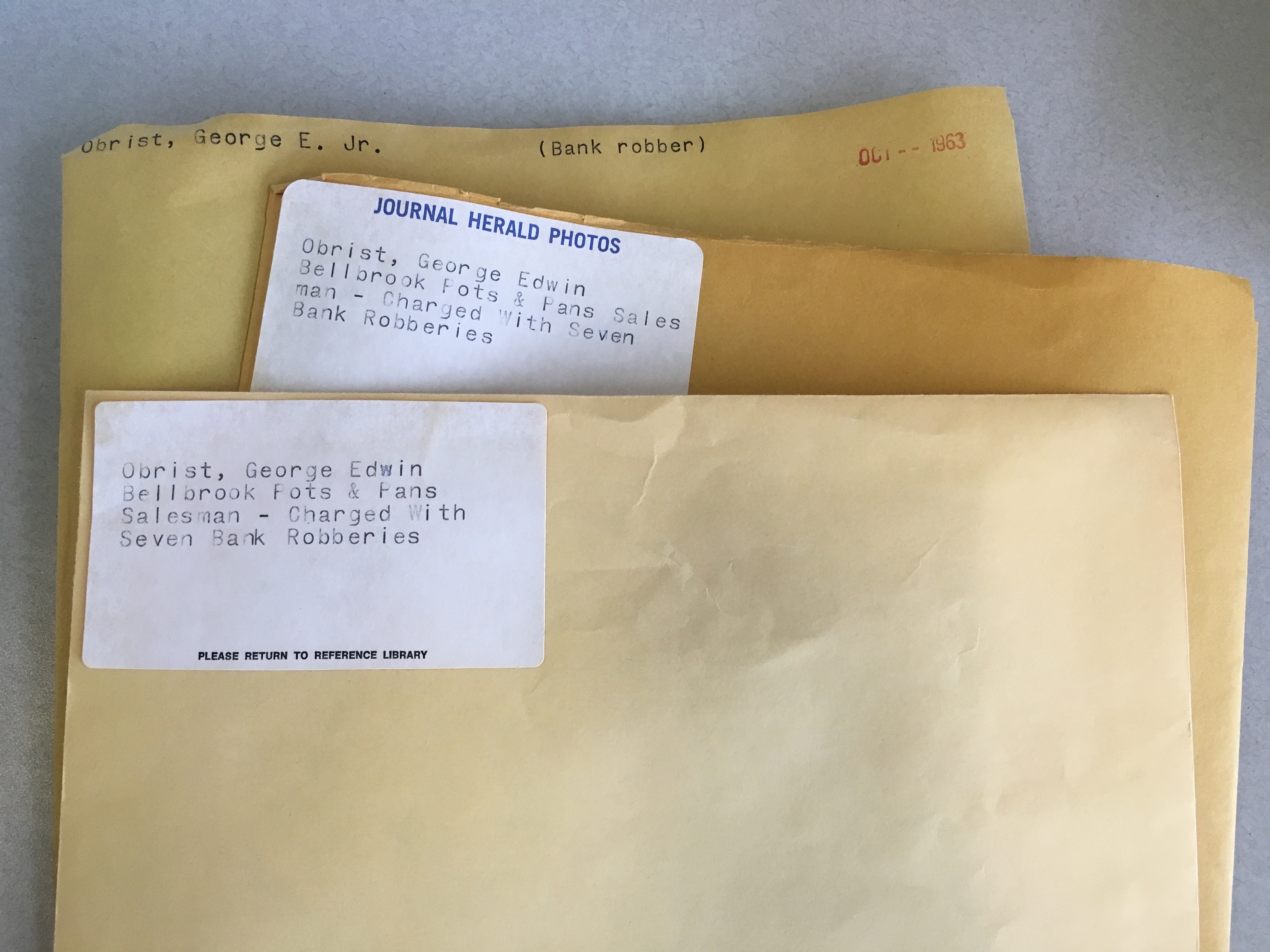 Files about George E. Obrist, Jr., from the DDN Archive (click to enlarge)

Sure enough, when I checked the Dayton Daily News Archive (searching under “Obrist” in the Personality Files), I found 2 files containing 12 photographs plus 1 file of clippings (see left).

In short, George E. Obrist, Jr., a 34-year-old Bellbrook resident and pots and pans salesman, was arrested on October 3, 1963, in connection with several bank robberies committed over the previous year. On February 9, 1964, he pleaded guilty on seven charges of bank robbery, 4 of which were in the Dayton area, 1 in Chillicothe, 1 in Columbus, and 1 in Utah (where he had been visiting), totaling over $46,000, most of which was never recovered. On February 25, 1964, at the U.S. District Court in Dayton, Obrist was sentenced to 21 years in federal prison.

In reporting the bank robberies story, news writers couldn’t resist discussing (nor perhaps should they have) Obrist’s earlier brushes with the law, including a car theft as a teenager (to which he admitted) and the suspicion of his involvement with his father’s murder (which was never proven). I feel obligated to note that the aforementioned Frank Kramer had some serious doubts about the veracity of details reported in some of these clippings, specifically those connecting George, Jr., with the death of his father almost 20 years earlier. (For the specifics, you’ll just have to read the book!)

Without further adieu, here are some of the photographs and news clippings from the Obrist files in the Dayton Daily News Archive. (Click on a photo to enlarge and read the description. On the description page, click again to view the image full-size.)

For more information about the Dayton Daily News Archive or to request a search, please complete our research request form.

This entry was posted in DDN and Dayton and tagged bank robberies, Dayton Ohio. Bookmark the permalink.