Frigidaire and the Atomic Freezer

Can a refrigerator protect you from a nuclear attack? In a controversial scene in Steven Spielberg’s Indiana Jones and the Kingdom of the Crystal Skull (2008), Indiana Jones hides in a lead-lined refrigerator to survive an atomic blast. While I won’t argue that he could have survived (Don’t try it at home!), the scene is not based entirely in fiction. Rather, it was based on actual nuclear tests conducted at the Nevada Test Site in Yucca Flats, NV in the 1950s. According to a document found in the Frigidaire Historical Collection (MS-262, Box 1B, Folder 4), a Frigidaire chest freezer participated in one of these tests.

Could Indy’s plan have really paid off? (Screenshot courtesy of We Got This Covered blog)

Set in 1957, the movie’s depiction of a prop town filled with mannequins is based on Survival Town, a model village built for Operation Cue. Operation Cue’s goal was to study how well an American town would survive an atomic blast. Project 32.5, part of the Food Test Program, measured what effect the atomic blast would have on frozen foods at different distances from the explosion.

A Frigidaire chest freezer (the exact model was not stated) was placed in a precast concrete home at 4,700 feet from Ground Zero and filled with frozen peas, cod fillets, French fried potatoes, chicken pot pies, sliced strawberries, and concentrated orange juice. 400 pounds of dry ice kept the freezer cool at 0°F without electricity. 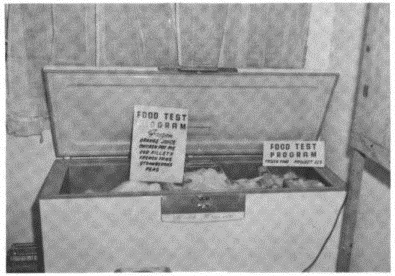 The freezer loaded with food, pre-test

Operation Cue’s “Apple II” atomic bomb exploded on May 5, 1955 at 4:10 a.m. Frigidaire physicist Edwin Miller was among the civilians who watched the detonation. 4½ hours later, scientists moved in to examine the freezer. Despite the damage around it, the freezer was relatively unharmed. Overpressure caused by the bomb’s shock wave creased the freezer door, sprung the springs, and broke off the plastic lining inside the door. However, the door could still be latched shut and when it was plugged in later, it still worked! 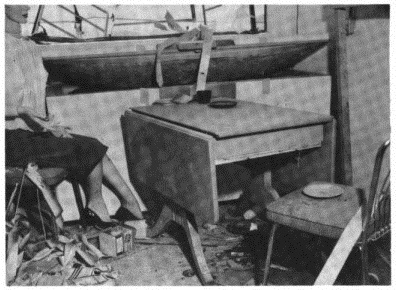 The freezer 4.5 hours after the blast, surrounded by debris

As for the food inside, scientists found no physical damage and detected no trace of radiation. In fact, the food was declared safe for human consumption and later eaten! In contrast, frozen food placed in large metal boxes and buried in the ground at 1,270 feet and 2,750 feet were very radioactive. 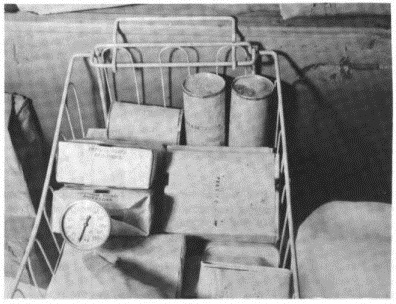 Food in the freezer, undamaged, after the blast

After the tests, the freezer returned to Dayton, where it was put on display in various shows before being, regretfully, scrapped. How did this Frigidaire chest freezer survive so well? Maybe it was its location: The concrete house it was in was one of only two houses at 4,700 feet that were not demolished. (You can tour Survival Town’s remains through the Nevada National Security Site.) Or, just maybe, Dayton engineering was just that resilient.

Whatever the reason, even if you cannot use your fridge as an impromptu bomb shelter, you can take comfort in knowing that it just might protect your food in a pinch.

The complete details and findings of Project 32.5 are available online, courtesy of Cornell University. The above photographs of the freezer are from this report. For more information about the other tests conducted during Operation Cue, see the digitized version of “Cue for Survival” for the official preliminary report.

This entry was posted in Collections and tagged Mitchell Dorsten, MS-262. Bookmark the permalink.