Raoul Lufbery and the Escadrille Lafayette

In early 1916, although the United States had not yet entered World War I, there were a number of Americans eager to support the Allies however they could. One response to that eagerness was the establishment of the Escadrille Americaine by the French government on March 21, 1916. The Escadrille Americaine was a a French flying squadron largely composed of American volunteer fighter pilots. The unit was first sent into service on the front lines at Luxeuil-les-Bains (near Switzerland) on April 20, 1916.

The Escadrille Americaine was later renamed the Escadrille Lafayette (sometimes inverted to “Lafayette Escadrille” in English) in December 1916, after the Marquis de Lafayette, a hero of the American and French revolutions. 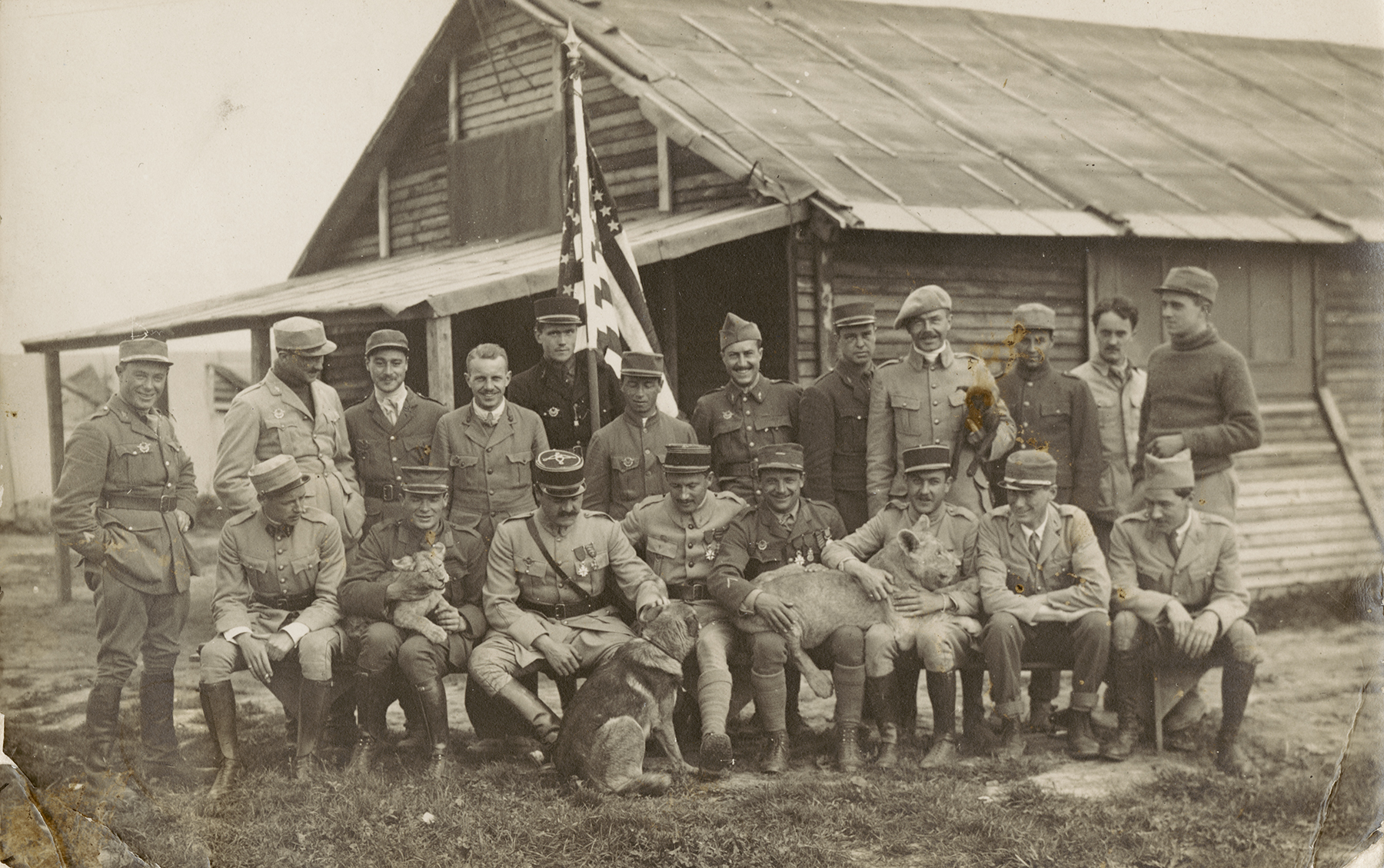 Members of the Escadrille Lafayette, along with their mascots, lions named Whiskey and Soda (from MS-502 Raoul Lufbery Collection)

One of the more well-known members of this Escadrille was Raoul Lufbery, a French-born American citizen and World War I flying ace. 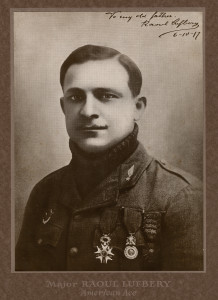 Born Gervais Raoul Lufbery on March 14, 1885, in Chamalières, Puy-de-Dôme, France, Lufbery immigrated to the United States about 1904. He became an American citizen and served briefly in the U.S. Army. Lufbery would joined the Foreign Legion as a mechanic at the beginning of World War I, later receiving his pilot wings in 1914.

In May 1916, Lufbery was assigned to the recently-formed Escadrille Americaine. He was later reassigned to the United States Air Service, after American entry into WWI in 1917.

Lufbery was a very successful ace pilot, shooting down at least 17 German planes. Unfortunately, this success and glory was short-lived.

On May 19, 1918, with enemy planes coming closer to the airfield for the 94th Pursuit Squadron, Lufbery rushed into the air without performing his usual pre-flight check. Soon his plane took a direct hit from the enemy. In order to escape the burning plane, Lufbery jumped out and was impaled on a fence post, dying instantly. Lufbery received full military honors at his funeral and is interred at the Lafayette Memorial du Parc de Garches, the shrine honoring the Escadrille Lafayette, just outside Paris, France. 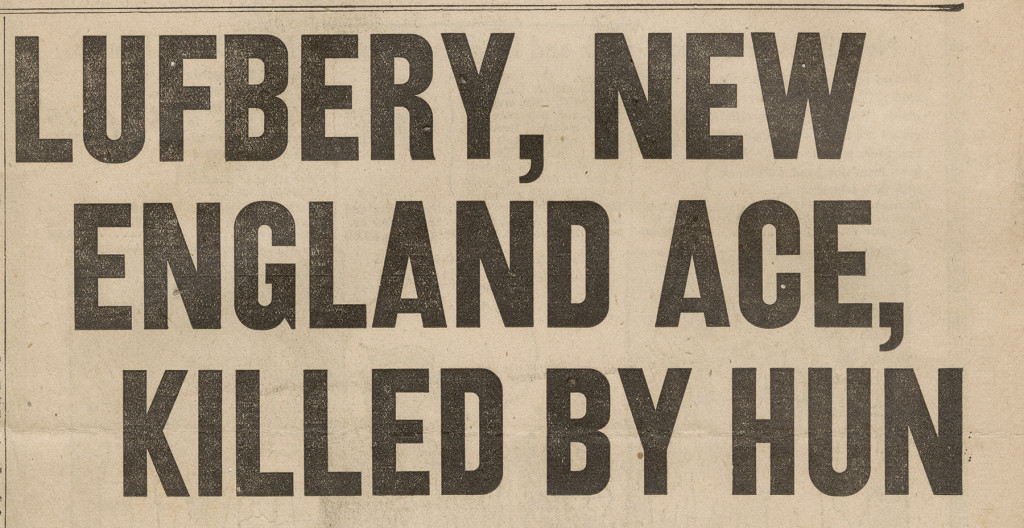 Special Collections & Archives recently acquired the Raoul Lufbery Collection (MS-502), donated by Raoul’s sister Germaine Fox Lufbery. The collection has now been processed and is available for research. It contains primarily documents pertaining to the World War I flying missions and the untimely death of Raoul Lufbery, including newspaper clippings, magazine articles, photographs, and other prints.

A selection of materials from the Raoul Lufbery Collection can be seen below: 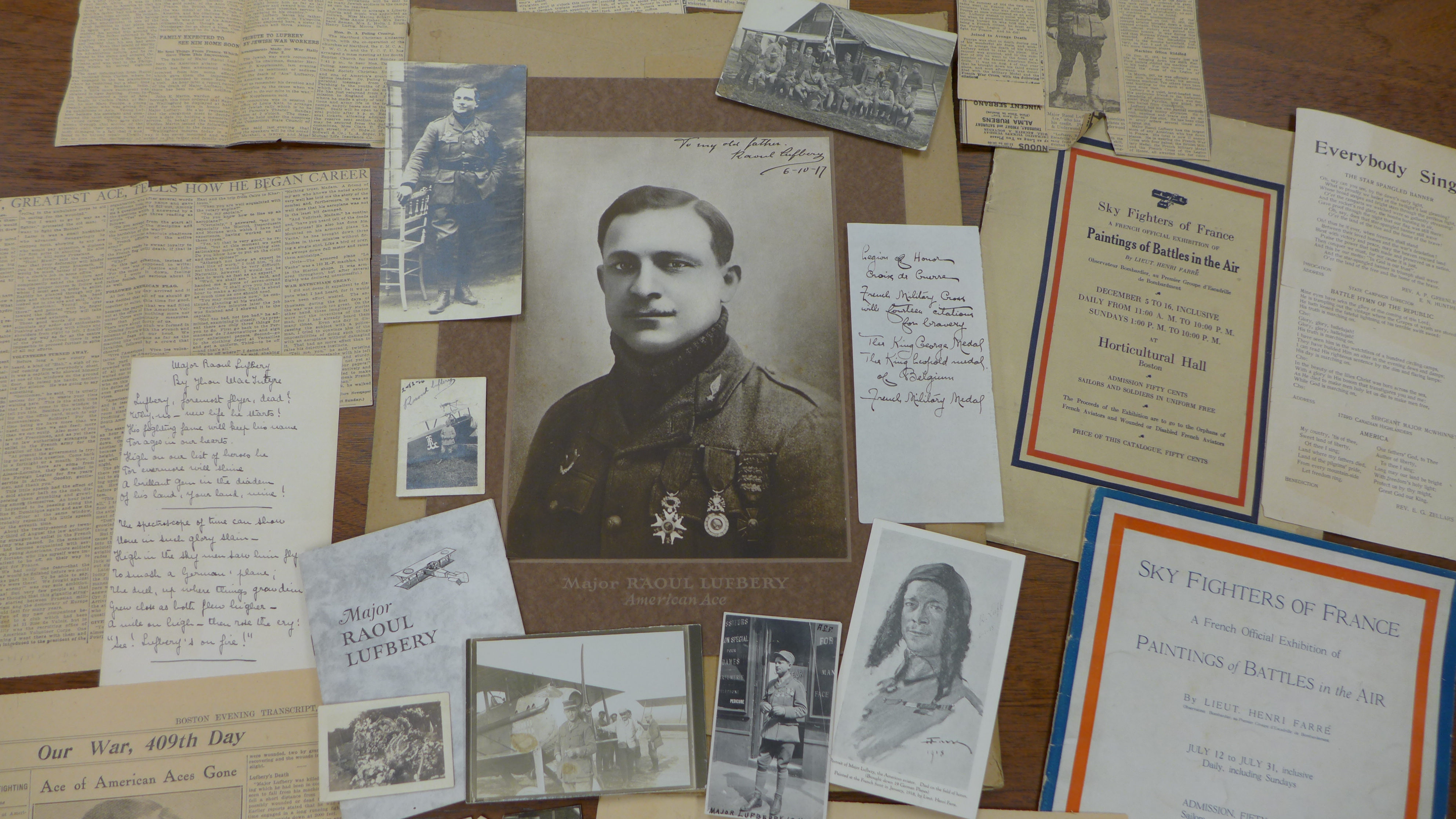 Variety of materials from the Raoul Lufbery Collection (MS-502)

(Portions the above biographical sketch were adapted from the original collection finding aid, written by Nina Herzog.)