Imagine a time without anesthesia, where unnecessary amputations happened every day, and the common cold could kill you. Modern era physicians don’t have to worry because of the results of early medicine. It is, however, what the early doctors of the Miami Valley encountered in Dayton. Physicians started coming before 1803 to start their practices. Many of the physicians were educated at early medical schools such as the University of Pennsylvania (1765), Transylvania University (1780), and the Medical College of Ohio (1819). Both practicing physicians and medical journal writers, the educated physicians cured much of the Miami Valley. Locally, Greene County’s physicians led their own paths, and their collections can be found in Wright State University’s Special Collections and Archives. The medical instruments includes scarificators, amputation kits, saddlebags and portable powdered medical vials. The collection ranges from early 19th century to modern 20th century realia. 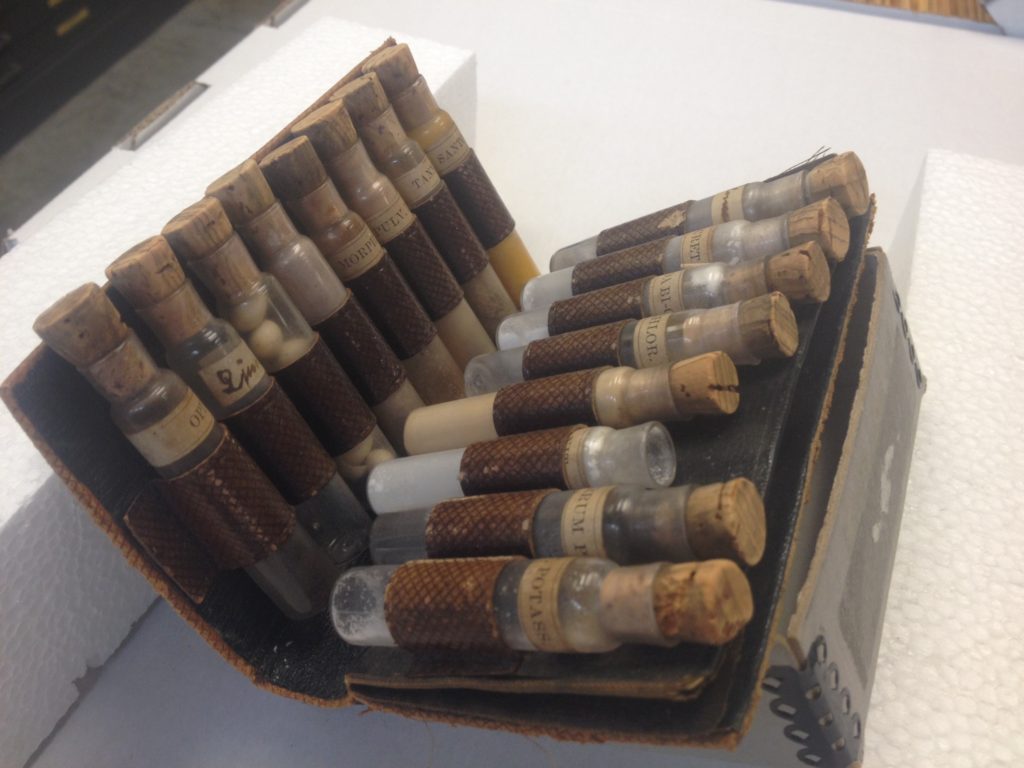 In Xenia, Ohio, one of the earliest doctors on record is Dr. Joshua Martin. Martin, born March 23, 1791, in Loudoun County, Virginia, immigrated to Greene County in 1813. During his early adolescence, he studied under a country doctor. Opening a practice soon after arrival it remained for another four decades. In 1815 due to an overwhelming boom in his practice, he left the medical profession less than a year and moved to Lawrenceburg, Indiana, with his brother to be a mercantiler. As a failed businessman, he returned to Xenia and married his first wife Hester Whiteman in 1818. Hester died in Feburary 1834, and in April 1835 he married Sarah Poague, who later died leaving an infant daughter in 1841. As a result, Martin brought his four unmarried sisters to live with him from Virginia where one died in 1851. His other three sisters and his daughter lived with him until his death in 1855. 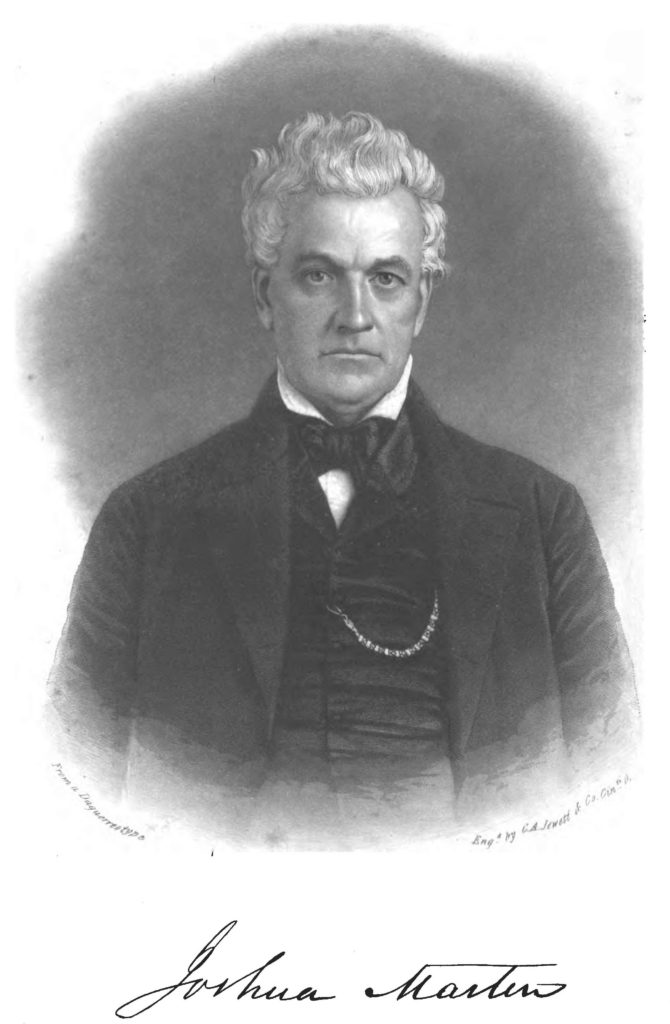 Epidemics were commonplace, and between the years of 1814-1845 the Miami Valley had witnessed cold plague, cholera, and typhoid fever. Martin introduced advanced treatments for the cold plague and saved lives. Cold plague was a malignant form of bilious pneumonia. Outside his practice he was a leader in the community. Advocating for women’s education, he was a board member of the Xenia Female Seminary and Collegiate Institute. Also, he was member of the Temperance Society and charter member of Masonic Lodge No. 49 in 1818, serving as worshipful master. Other social activities included being President of The Greene County Anti-Slavery Society, and he had a freed slave that had worked with him in the 1850’s by the name of Moses Stublefield in Xenia.

Martin was a general practitioner and a published physician in medical journals. Such a case written was about a set of conjoined twins at the abdomen from a woman in Lebanon he attended. The mother survived, but days later both infants died. Gaining his education at Transylvania University’s medical school located in Lexington, Kentucky, in 1826 he returned to Xenia. The Dr. Joshua Martin Collection (FSC-4) holds his diploma from both the university and the Medical Society of Lexington. His medical thesis dissertation can be found at Transylvania University and seen digitally online entitled “On Ascites”. 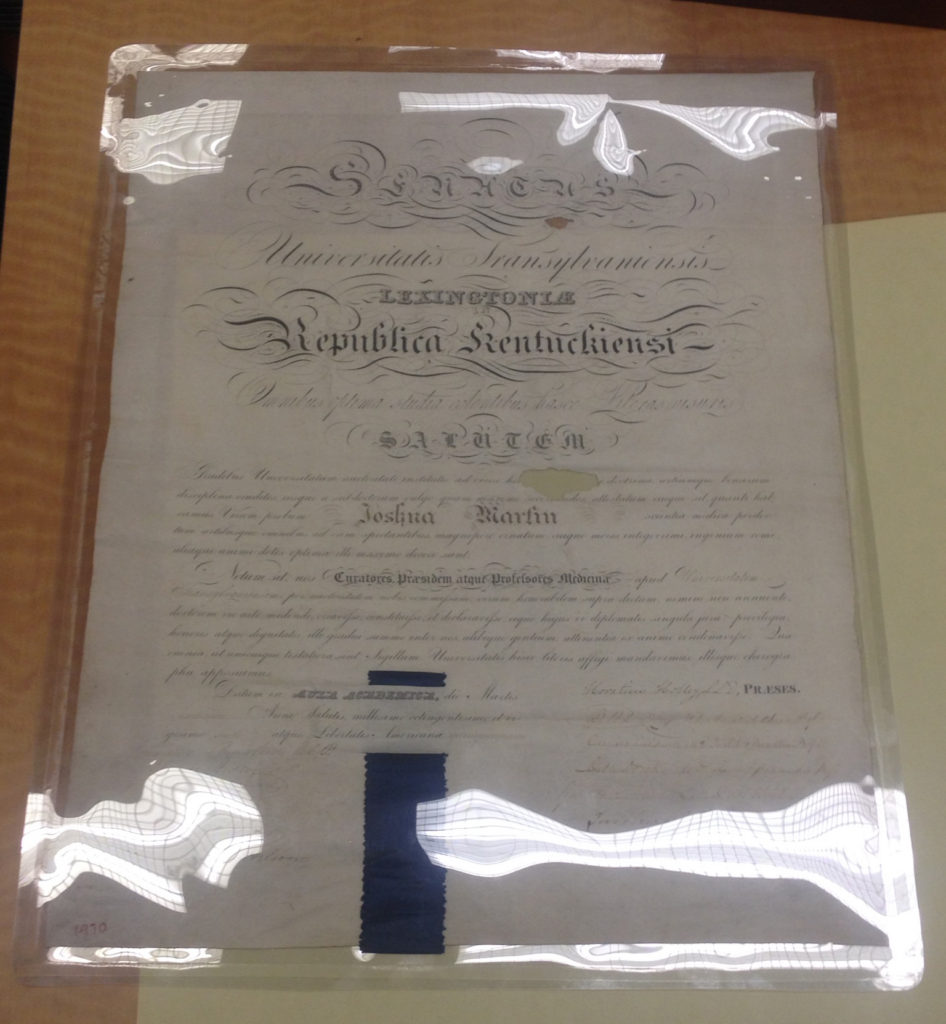 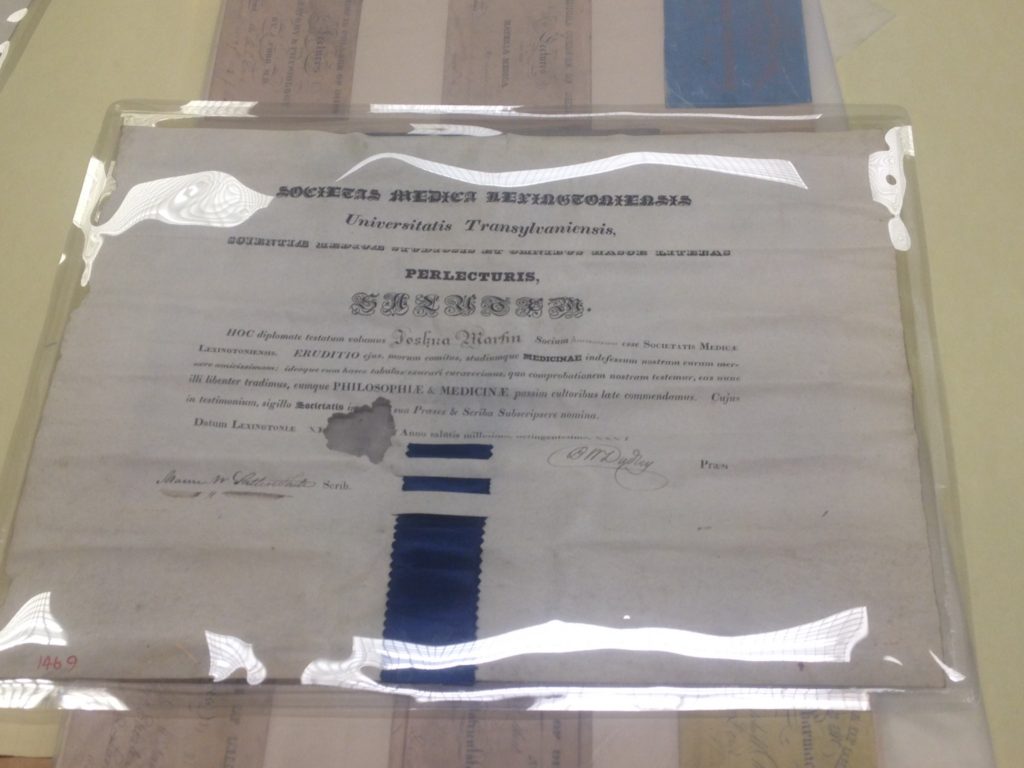 Transylvania University was founded in 1780, and is regarded as the 16th oldest university in the United States. In December of 1798, there was an act of consolidation that formed the university officially and in early 1799; there were efforts of creating the first medical college in the Mississippi valley. It wasn’t until 1819 that a curriculum was established for students, prior to that it consisted of preceptorships and irregular lectures. Transylvania’s Medical Department enrollment graduated a little under 2,000 physicians and over 4,000 students between the years of 1799-1859. The Board of Trustees named it the Medical Department in the College of Transylvania. The first faculty members were some of the best classically trained doctors of their time.  Medical societies were founded soon after to continue education in the medical field and attracted young pupils for membership, this could explain the medical certificate mentioned in the Joshua Martin Collection. In 1820 between donations of the citizens, the city of Lexington, and southern physicians, $13,000 was given to go to Europe to buy books and apparatuses for the medical department. The medical school closed in the 1850’s due to the land lock in Lexington and that both the cities of Louisville and Cincinnati were opening their individual medical schools along the rivers. 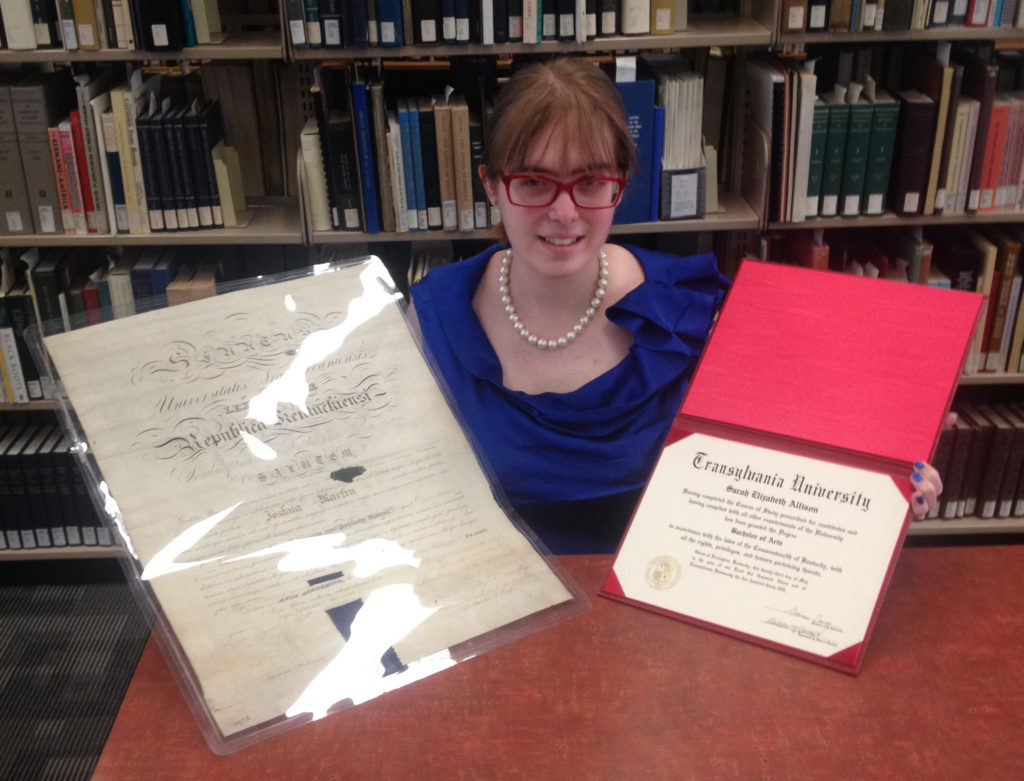 The relationship with Transylvania University and Greene County continues into the 1830’s in connection with the medical faculty. Many of the doctors whom graduated with their M.D. migrated to towns like Cincinnati, Dayton and Xenia. The majority of doctors in the west had gained their education through Transylvania. Dr. Daniel Drake, originally Materials Medica Professor for Transylvania University, in 1819 chartered The Ohio Medical College located in Cincinnati and was chair. In 1823 Drake returned to Transylvania where he met Martin as a student. When in the 1830’s the Medical College of Ohio had been closed for legal issues with the state, Joshua Martin was appointed to the committee that led the Third District Medical Society to re-establish the school. He at the time was President of the Third District Medical Society of Ohio. Martin had been associated with the Third District since 1824 when the counties of Greene and Warren combined to have the authority to grant medical license for practice as censors. The college later evolved into the Cincinnati Medical College that he later was both trustee and professor of medicine. Martin also was a member of the Greene County Medical Society as Vice President.

Dr. Martin, however, acted well his part, was always more than the circumstances with      which he was surrounded , and where he was known, there is an abiding consciousness that he contributed to make the community of which he was a member wiser, happier, and better.

Dr. Joshua Martin died in October of 1855 during a stay in Louisville after a period of ill health. His death reached Xenia by telegraph and a city mourned their physician. The funeral was the largest held in the county, with miles of carriages traveling to Woodland Cemetery for the internment. Businesses were suspended in the town in honor of the doctor. Local physicians and citizens gathered to make resolutions of bereavement to the families and it was to be published in medical journals. During his time in Xenia he had many pupils that studied medicine under his tutelage. He was said to be one of the greatest doctors in the county.