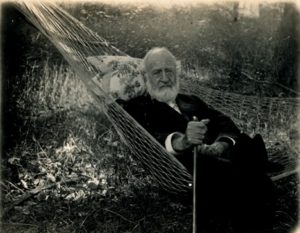 One hundred years ago today, Milton Wright, father of Wilbur and Orville Wright, died in his sleep at Hawthorn Hill, the family home he shared with his son Orville and daughter Katharine. He was 88. Milton’s passing was described in a letter written by his oldest son, Reuchlin, shortly after his death.

I suppose you have learned of the death of my father, your Uncle Milton. It occurred some time early Tuesday morning April 3rd. He was about the evening before as usual seemingly feeling as well as usual. He read the evening paper, wrote at his desk, was back and forth in Katharine’s room talking to her and went to bed as usual. In the morning, he not coming down to breakfast as usual they went to his room and found him lying seemingly asleep in one of his favorite positions and covered. Touching him they found he was dead but the body not yet quite rigid. He must have died while yet asleep, there being no indication of suffering or struggle. A more peaceful death could hardly been imagined, and we are grateful for that. He was buried Thursday P.M. at the Woodland Cemetery beside Mother and Wilbur. 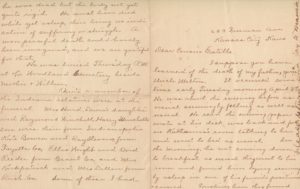 We’ve been sharing Milton’s diaries with you since 2013.  His diaries are part of the Wright Brothers Collection and span the years 1857 until his death in 1917. They provide a detailed chronicle of Milton Wright’s dynamic and sometimes controversial ministry and leadership in the United Brethren Church, and his role as a father, husband, uncle, grandfather, grandson, and brother. The diaries demonstrate Milton Wright’s awareness of local, national, and world events, as well as his political allegiance and support of progressive movements. Probably the most important contribution the diaries make to scholarship on the Wright Brothers is the greater knowledge we gain about the dynamics of the Wright Family on a day to day basis and we are able to get a glimpse into the past, of generations gone by, and learn how they shaped the future of this family. 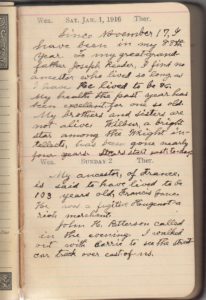 Special Collections and Archives is currently working with the WSU Libraries’ Digital Initiatives and Repository Services to digitize the original diaries and place them in CORE, the Campus Online Repository. We hope to have them online later this year.

Milton Wright was an also avid genealogist. He wrote many letters in an effort to find out as much as he could about his ancestors. There are hundreds of letters in the collection to friends, family members, and even strangers, in an attempt to learn as much as possible. Mixed in with the exchange of genealogical information are scattered reflections and memories of family gatherings, impressions of people, events, and life in general. We’ll be sharing some of his writings with you in the months ahead.

The photographs of Milton Wright in this blog post were taken by Dayton photographer, Jane Reece, in 1914. 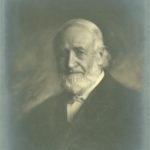 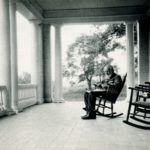 Milton on the porch at Hawthorn Hill 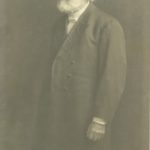