In honor of National Poetry Month, as we celebrate Wright State’s 50th anniversary it seems most appropriate to share a poem written by one of WSU’s founding administrators on the eve of his retirement from Wright State. Dr. Howard Bales began working at the Dayton Branch Campus in 1964, when Wright State University was still a combined branch campus for Miami University and The Ohio State University. Dr. Bales was the Assistant Director of the College of Science and Engineering, and on-campus administrator for the Ohio State University at the Dayton Branch Campus. He reported to Ed Moulton, Dean of Off-Campus Education for Ohio State. Like the majority of the early faculty and staff, Howard had extremely fond memories of the branch campus days, when a group of young and enthusiastic professors were brought together to build a new state university in Dayton. Once the Dayton Branch Campus became Wright State University, Howard stayed at the university until his retirement in 1978. On the eve of his retirement, Howard wrote the following poem, “Remember When” by “Drawoh Selab”, (aka “Howard Bales”), in tribute to this university and to his colleagues that helped build it. 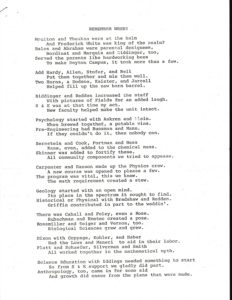 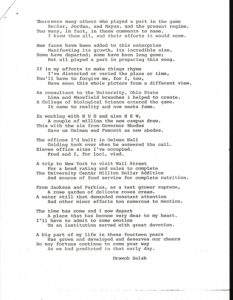