Special Collections & Archives will be closed on Monday, May 29, 2017, in observance of Memorial Day. We apologize for any inconvenience.

Memorial Day is a national holiday to commemorate the men and women who have died in military service for the United States.

The 322nd Field Artillery Regiment was formed on June 15, 1917, at Fort Benjamin Harrison, Indianapolis, Indiana. The Regiment departed for Europe in June 1918 and remained overseas until April 1919. From September 1918 through the last day of the War on November 11, 1918, the 322nd participated in the Meuse-Argonne Offensive.

Upon their return veterans of the unit formed the 322nd Field Artillery Association and held reunions every summer from 1920-1981. The following pages are from the souvenir program for the fourth annual reunion held on July 26, 1924, in Eagles Park, Dayton, Ohio. 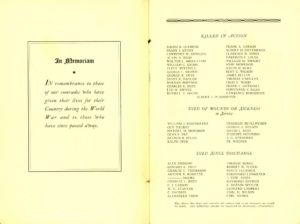 This entry was posted in Collections, SC&A and tagged closings, Memorial Day, MS-100. Bookmark the permalink.