Long before Henry Kaiser ever spoke with Howard Hughes about the possibility of building a giant transatlantic cargo craft, flying boats were playing integral military roles in several theatres of World War II, none more so than the ubiquitous and iconic Consolidated PBY Catalina. An example of this plane can be seen in Dayton’s National Museum of the United States Air Force, and the fact that it originally served with the Brazilian Air Force is a testament to the design’s wide-ranging versatility. 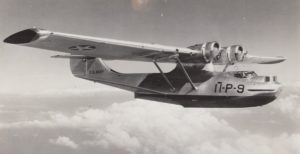 The Catalina was a remarkably long-lived airplane design as well. The first prototype flew in March of 1935, roughly two years after a Navy requirement for a patrol flying boat was issued. “Patrol” was a vague category by today’s Navy’s standards, encompassing a wide variety of roles which are currently filled by purpose-built designs. In the 1930s, however, the Consolidated Aircraft Corporation’s twin-engine parasol-wing flying boat would be a patrol bomber, search & rescuer, cargo transport, convoy escort, and anti-submariner in equal measure. For nearly half a century, operators around the world would find use for the craft, the last examples retiring from military service as late as 1981. 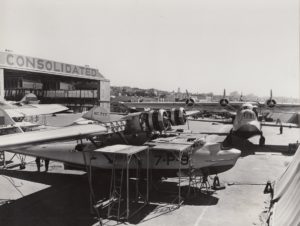 Although the NMUSAF’s Catalina (labeled “OA-10A,” to distinguish it as an Air Force vehicle as opposed to the Navy’s “PBY” designation) is painted in the garb of a search & rescue aircraft, this particular flying boat’s Brazilian heritage instead points to a career spent as an anti-submarine patroller over the Atlantic. One of the most dramatic episodes involving a Catalina from this theatre of the war came on July 31, 1943, when the German U-boat U-199 found itself under attack by three patrol bombers – one of them a Brazilian PBY – off the coast of Rio de Janeiro. Depth charges from the flying boat sent the submarine and most of her crew to the ocean floor, though the twelve survivors also owed their survival in large part to the lifeboat dropped by the Catalina crew. 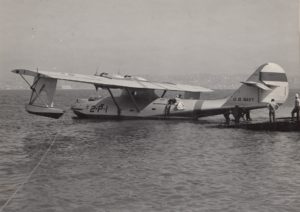 The worldwide use of Catalinas and other aircraft like them was a reflection of just how universally recognized the military utility of flying boats was during World War II. Unfortunately, as stated before, the consequent conditions of that war would lay the foundation for their obsolescence in peacetime. As patrol bombers and search & rescue crews were carrying out mission after mission, the largest and most ambitious flying boat ever designed was slowly growing, piece by piece, in a private hangar just north of Los Angeles. It would be difficult to suspect at the time that its first flight would be its last, or that it would so dramatically signal the end of an era.

One Response to Flying Boats, Part IV: “The Catalina”