This Monday, December 17, marks the 115th anniversary of the first flight at Kitty Hawk, North Carolina. We are all familiar with the iconic image of the Wright Flyer in flight with Wilbur Wright running alongside at Kill Devil Hills. However, did you know December 1903 actually marked the 4th visit to Kitty Hawk by Wilbur and Orville?

The Wrights researched wind speeds for areas all over the United States and selected Kitty Hawk for the favorable winds and sand beaches. Wilbur left Dayton for the first trip to the Outer Banks on September 6, 1900, and Orville followed on September 24. The brothers stayed in the home of William J. Tate, Postmaster for Kitty Hawk, until their camp was ready. Tate assisted the Wrights with many of the glider and airplane flights and remained a life-long family friend. Over the next month the brothers conducted both manned and unmanned flight experiments with the 1900 Wright glider.

On July 7, 1901, Wilbur and Orville again departed for Kitty Hawk with a new glider.  This time they were joined by Edward Huffaker and, George Spratt, both of whom were recommended by Octave Chanute, who, incidentally, would also spend a week with them that summer. While there they conducted an estimated 50-100 manned and unmanned flights with the 1901 glider.

Then in 1902, the brothers traveled to Kitty Hawk, arriving on August 26 and staying until October 28. During the next few months Wilbur and Orville conducted almost 1,000 glides with the 1902 glider. Lorin Wright, their older brother, made the trip from Dayton and witnessed some of the gliding experiments during his two week visit. 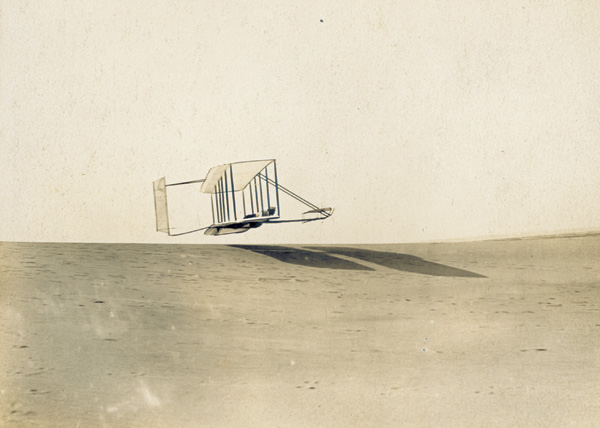 September 25, 1903, marked the 4th trip of Wilbur and Orville to Kitty Hawk. Upon arrival they began new gliding experiments and started assembling the 1903 Wright Flyer. Orville made a quick trip back to Dayton on December 9-11 to get a replacement propeller shaft. By December 17, the Wright Brothers were ready to make history. At 10:35 a.m. Orville successfully completed the first motorized flight by flying for 12 seconds and covering 120 feet. Each brother made 2 flights on December 17 with Wilbur having the longest of the day at 59 seconds.

Even after the first flight, the Brothers were not finished with Kitty Hawk. Wilbur and Orville returned in April-May 1908 with the 1905 Wright Flyer to practice flying. This trip would mark Wilbur’s last. In October 1911, Orville, accompanied by his brother Lorin, nephew Horace, and Alexander Ogilvie, spent several weeks at Kitty Hawk conducting glider experiments. Then on November 19, 1932, he attended the dedication of the Wright Brother National Memorial. Orville’s final Kitty Hawk visit, accompanied by Earl N. Findley and William Tate, was on April 18, 1939.

Enjoy the gallery of photographs showing the Wright visits over the years. Additional images of the Wright Brothers, first flight, Kitty Hawk, and more are available on CORE Scholar.