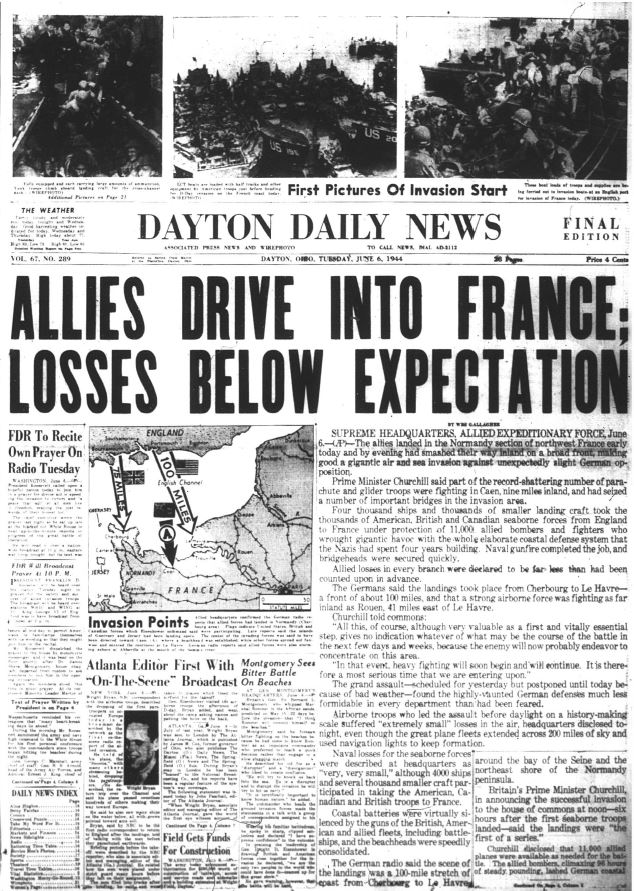 Today marks the 75th anniversary of D-Day. On the morning of June 6, 1944, 75 years ago, Daytonians woke up to discover that overnight the Allies had launched a massive air and sea invasion of German-occupied France. D-Day as it became known was underway. Much of the June 6 Dayton Daily News was devoted to the Normandy Invasion complete with what the newspaper described as the “First Pictures of Invasion Start.” Many anxious residents of the Miami Valley waited for word from loved ones stationed in the United Kingdom.

One Dayton resident serving “Somewhere in the U.K.” on June 6, was Hermene Schwarz, who, incidentally, was co-founder of the Dayton Ballet with her sister Josephine. Hermene joined the Red Cross in October 1942 and in the summer of 1944 was working as an occupational therapist at a hospital in England. By the end of  July 1944 she was across the Channel in France with the 30th Field Hospital. In a June 13, 1944, letter to her family, Hermene described the event of the historic week before:

Guess I should have started this off as a rave notice about the events of last week. But somehow there’s little to rave over, it was bound to happen – and soon – here the preparations had been for so long – and such stringent happenings previous to the actual invasion, (for us at least,) that the real thing was just another day gone – but with a purpose accomplished. There was no celebration – no activity – nothing. We knew too well the magnitude of the undertaking – the cost of lives and energy…