The Tecumseh High School Class of 1955 Collection (MS-650) contains primarily clippings, programs, photographs, scrapbooks, and mementos from class members’ time in high school, as well as later alumni and reunion activities. The basketball team, which was quite good at the time, is strongly represented in the collection. The scrapbook of German exchange student Gudrun Klotz from the class’s senior year is also particularly noteworthy. 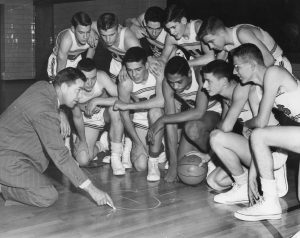 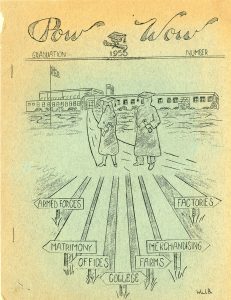 Also notable during this time period was the impressive win-loss record of the high school basketball team, coached by Frank Shannon, who served as a teacher and coach at Olive Branch and Tecumseh from 1948 to 1955. The team played well in multiple tournaments, and evidence of their status as a basketball powerhouse is demonstrated strongly in this collection.

For more information about this collection, including a detailed box and file listing, please review the MS-650 Tecumseh High School Class of 1955 Collection finding aid or contact Special Collections & Archives.