On April 12, 1862, a friend of Jefferson Patterson, John Jones, wrote Jefferson a letter about his son’s participation in the Battle of Shiloh.  The son, 1st Lieutenant Frank Jones, was a member of the 13th Ohio Volunteer Infantry, Company K.  The 13th OVI was also a member of the Army of Ohio and was heavily engaged in the battle.

The letter is difficult to read, so no transcript has been completed.  The letter begins:

“Dear Jefferson,  I have just [received] a dispatch from Pittsburg Landing as follows.

Dear Father, We have had a hard fought battle.  I am safe.  Frank.”

The rest of the letter appears to report on the battle.  If you can transcribe the letter, please send us a copy. 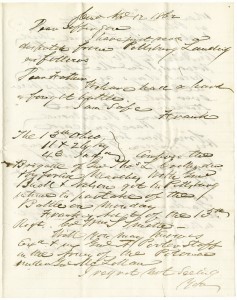 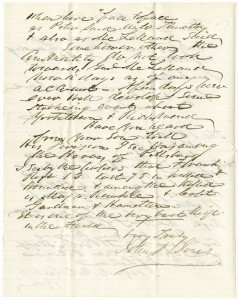 One Response to Shiloh