On the evening of April 2, 1917, one hundred years ago today, President Woodrow Wilson addressed a joint session of Congress to request a declaration of war against Germany. The Senate and House passed the resolution in the following days with Wilson signing the official declaration on April 6. Residents of the Miami Valley would soon be serving overseas in Europe and aiding with the war industry here at home. Here are a few reflections of Miami Valley residents, both home and away, on the eve of war. 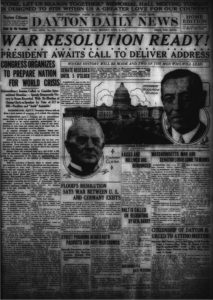 Alice Carr, a Yellow Springs native, Antioch graduate, and nurse at John Hopkins Hospital in Baltimore, Maryland, described the scene there in an April 1, 1917, letter to her cousin, Bessie Totten of Yellow Springs:

“Well I guess we are going to take the plunge. The Red Cross is hustling & Hopkins is a base hospital. They say if War is declared that all the pupil nurses who have not been here 18 mos [months] will have to go home. Will have to work like dogs. There are soldiers everywhere_ in the streets, cars, theaters, on ammunition wagons running like mad out to the forts & it seems very military these lovely spring days.”

Carr sailed for France with the Red Cross in June 1917 and served at a base hospital near Verdun. A blog entry on Carr’s World War I experience and life in Europe can be read here.

The First World War would greatly impact the Miami Valley and from now through Veterans Day (formerly Armistice Day), November 11, 2018, we hope to share the thoughts, feelings, and accounts of those from the Miami Valley who witnessed “The War to End All Wars.”