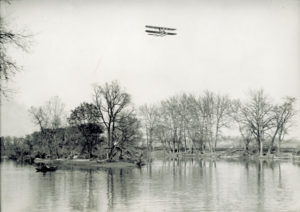 By 1911, the Wilbur and Orville Wright had managed to prove that manned, powered flight was possible, practical, and profitable. They had secured U.S. Army contracts for their Model A two years before, begun mass-production of their improved Model B design in a newly built Wright Company factory a year later, and founded the world’s first flight school at nearby Huffman Prairie. They were Dayton’s hometown heroes and had been the toast of Europe over the past few years, the first major worldwide celebrities of the dawning 20th century. Lesser known among their achievements and experiments of this particularly fruitful period, however, are their forays into the combination of aviation and water travel. While the term would quickly become anachronistic, the brothers’ “hydroplanes” remain among their most curious innovations. 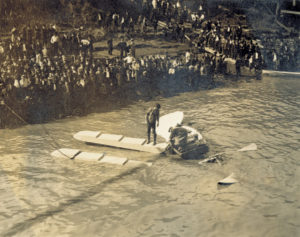 A view of the crowd and the submerged Wright Model CH Flyer after J. William Kabitzke’s crash into the Mississippi River, 1912, ms1_19_7_11

1911 and 1912 saw several attempts by Wright Model B owners to adapt the design for water operation, with varying degrees of success. Frank Coffyn earned the distinction of being the first to film a motion picture from the air in his Wright B floatplane in October of 1911, while J. William Kabitzke, an employed pilot of the Wright Company, suffered a severe crash of his in the course of attempting a long-endurance flight. It would not be until 1913, however, that the Wrights would design an aircraft with the purpose of taking off and landing on water, the first of which was designated the Wright CH. Initially employing a twin-pontoon layout, the difficulty of turning the craft in the water caused the brothers to adopt a single large pontoon instead, serving much the same function as a boat’s hull. 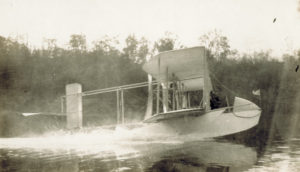 It was Grover Cleveland Loening, however, who can be credited with designing the Wrights’ first proper “aero-boat,” having personally solicited Orville Wright for employment following the crash of his first seaplane design in 1912. The Model G, a marked departure from several signature Wright design elements, earned the distinction of being the company’s first airplane with an enclosed cockpit space, as well as dihedral wings and a non-flexible elevator assemblage. Loening himself, along with Orville, would make several experimental flights in this craft off of the Great Miami River in 1913 and 1914 during his employment with the Wright Company. 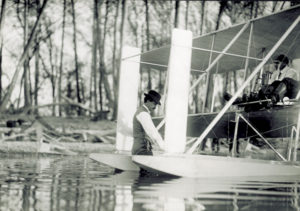 Orville Wright standing in the Miami River between the pontoons of a Wright Model CH Flyer. Two unidentified men sit in the seats of the Flyer, ms1_20_2_5

By this time, however, the Wrights’ status as the world leaders in aviation had diminished significantly. Not only were European designers and experimenters rapidly catching up with the Dayton brothers’ discoveries, but Wilbur’s death in 1912 and Orville’s continued legal battles surrounding patents and copyrights hobbled the Wright Company’s ability to lead in the arena of technological development. Slowly but surely, the innovations driving the newly born world of flying – and of flying boat-shaped craft off of water specifically – would find their manifestations elsewhere. One competitor of the Wrights in particular would serve as the catalyst for the airplane’s arrival as a truly transcontinental means of travel.

This entry was posted in Aviation, Local History, Wright Brothers and tagged MS-1. Bookmark the permalink.