Wright-Patterson Air Force Base has long been a center of research and development. For years, the base was the center of both theoretical research and flight test for the Air Force. Even though flight testing is today conducted at Edwards Air Force Base in California, much research and experimentation continue to take place here in Dayton.  However, with this research and development there is an ever-present risk of failure. As a result of being a center of experimental aviation as well as simply being a frequently visited military airfield, the Dayton area has seen quite a few accidents over the years. Oftentimes these accidents have had tragic consequences for those living in the surrounding area.

The Dayton Daily News Archive has quite a few folders full of material about the base and the activities that take place there. As Dayton’s main newspaper, it has had up-close access to some experiments that are not generally visible to the public. The newspaper has also covered many of the accidents that have occurred in the region. The following two groups of photographs come from these folders, and really aid in telling Wright-Patterson’s history.

The first group of photographs display some the experiments that took place from the 1940s up through the early 1970s. These experiments range from aerodynamic testing to tests involving human subjects. 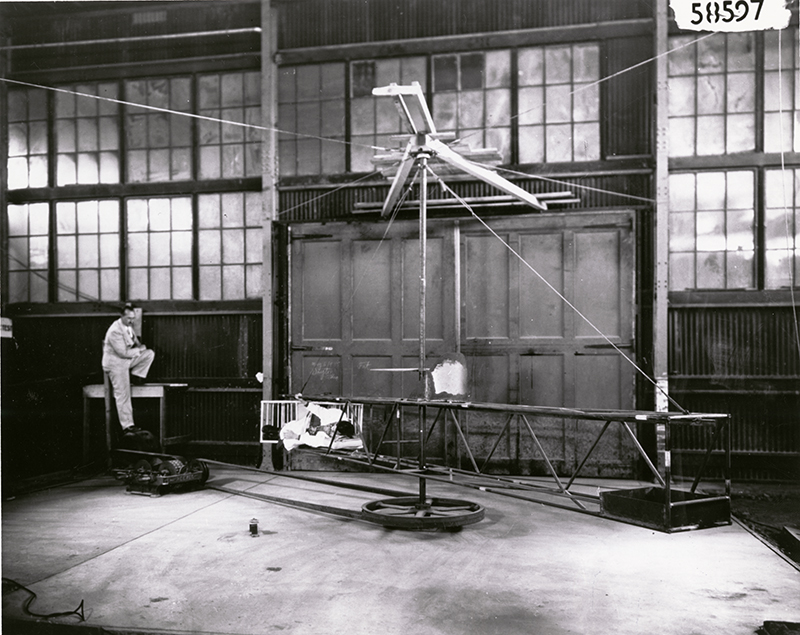 According to the caption on the back of this photograph, this human centrifuge was the first built in the United States. The centrifuge was located in a balloon hangar on the flight line of Wright Field, and was constructed by Capt. Harry Armstrong and Dr. John W. Heim. Human centrifuges were designed to test the resistance of the human body to g-forces, a force commonly felt by pilots. Armstrong, who is pictured sitting on the table to the left, eventually became one of the leading minds in aerospace medicine, and would also serve as Surgeon General of the United States. Interestingly, the centrifuge in this picture has the human subject lying on his or her side. Today’s centrifuges generally have the subject seated in an upright position. 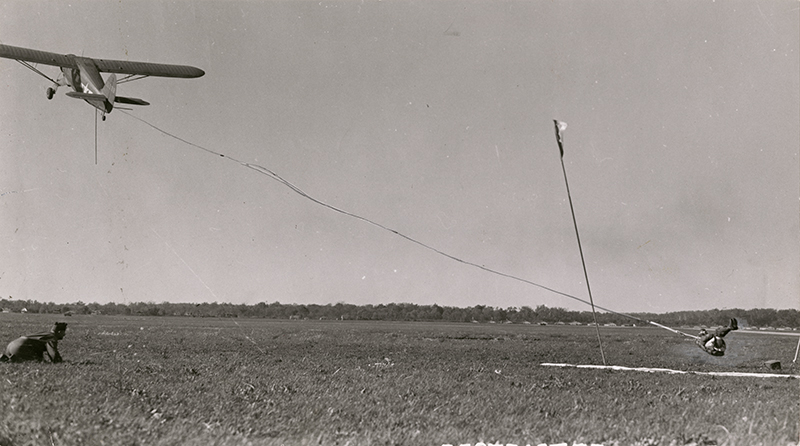 This photograph was taken in 1943 in the midst of the Second World War. The caption on the back of the photograph claims that Wright-Patterson was the site of the first pickup by a flying aircraft of a man on the ground. Presumably the experiment was undertaken to find ways of extracting downed airmen on the ground. The aircraft being used in this experiment is a UC-47 Norseman, a Canadian built aircraft used by the US Army Air Forces as a utility aircraft. 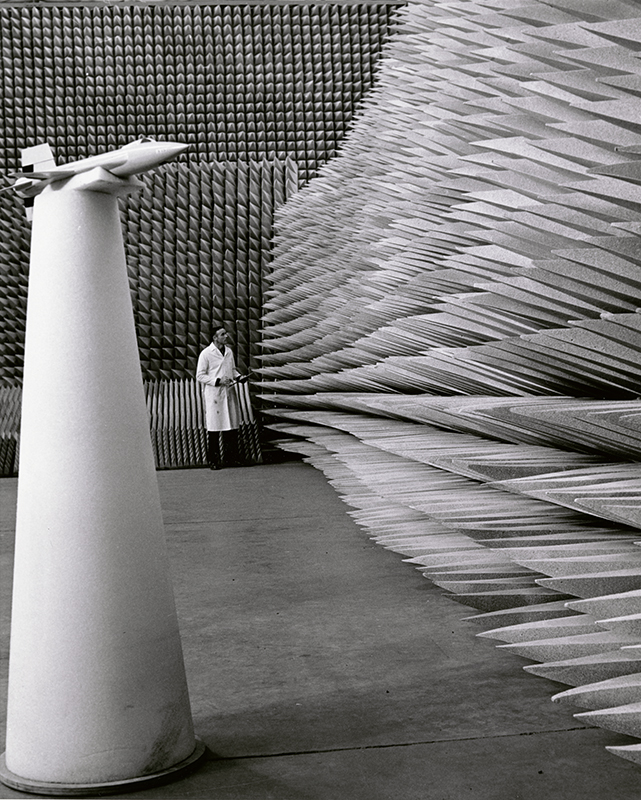 This picture shows the then new anechoic chamber at Wright-Patterson AFB which was built to test the radar signatures of aircraft. The caption says that, “The walls are covered with spikes of rubber-like material impregnated with carbon to absorb, rather than reflect, radar signals.” This means that models of aircraft can have their radar signatures measured without the radar waves being reflected off the surface of walls. The aircraft model in the left of the picture is that of an X-15, a research aircraft that flew during the 1950s and 1960s that was one of the fastest and highest-flying aircraft ever built. 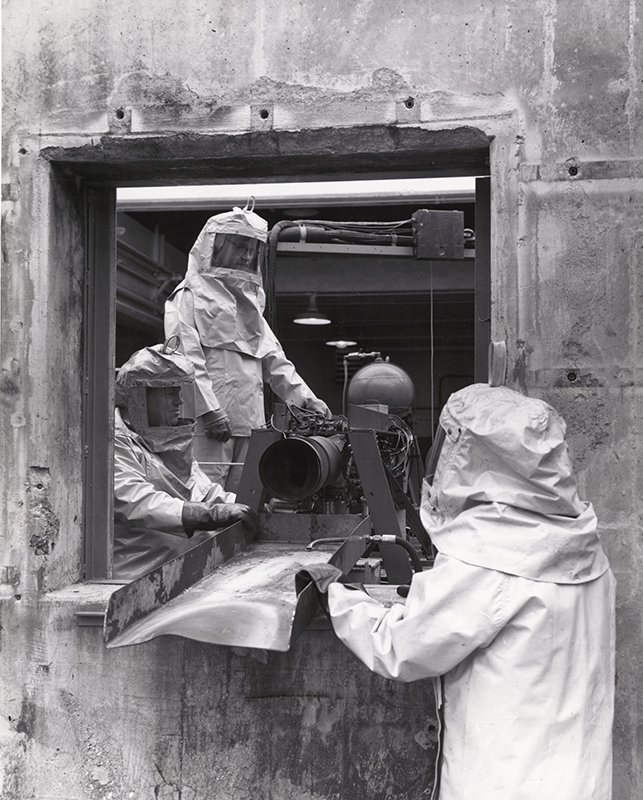 This picture is unfortunately not dated, but it shows what appears to be several scientists inspecting a rocket engine. This engine appears to be one that uses a type of rocket fuel that is very corrosive to human tissue, as evidenced by the chemical suits worn by the scientists. 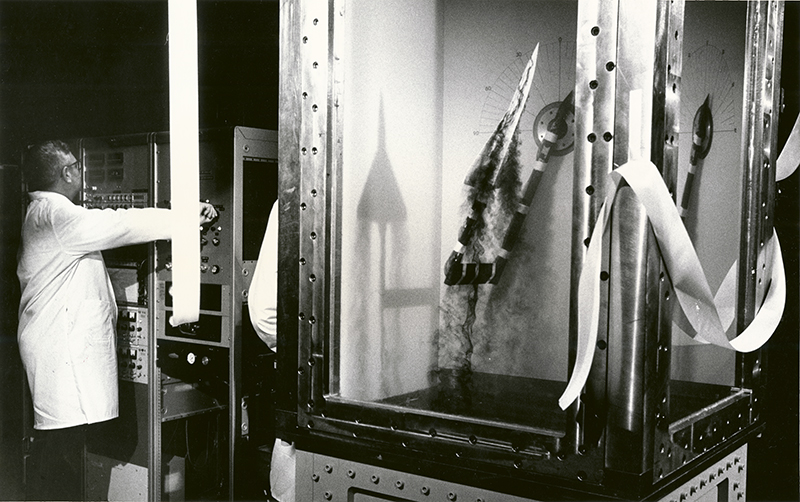 This picture shows an experiment with a water tunnel used for flight dynamics testing. The tunnel was in the Flight Dynamics Laboratory of the Aeronautical Systems Division. The technician, Carl Shoffstall, is monitoring the flow of the colored water over the wings and fuselage. The purpose of this testing is to help engineers observe airflow across the shapes of new aircraft designs. 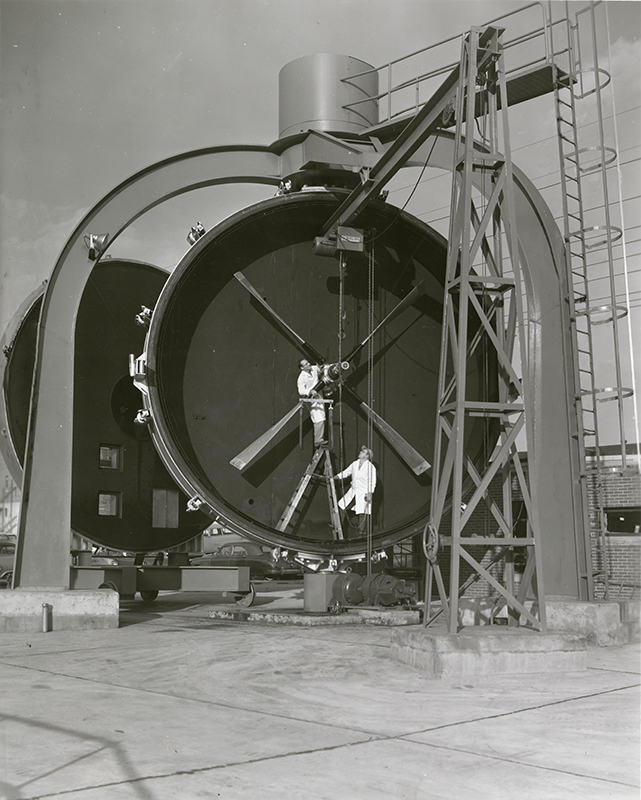 This picture shows another type of test involving propulsion. This one involves testing types of propellers under adverse conditions, such as inducing gyrations into the structure of the propeller. These tests were to determine the failing point of propeller types. 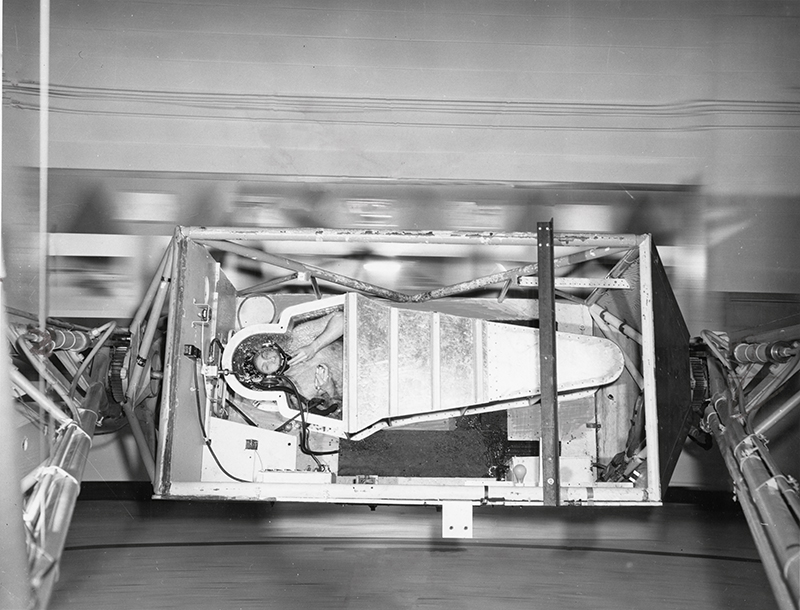 This picture has no caption aside from the words “Aero Med Lab.” and the date “May 1, 1958” written on the back, but it appears to show a water tank being spun around a centrifuge. It seems possible that the water tank was used to simulate some degree of pressure. 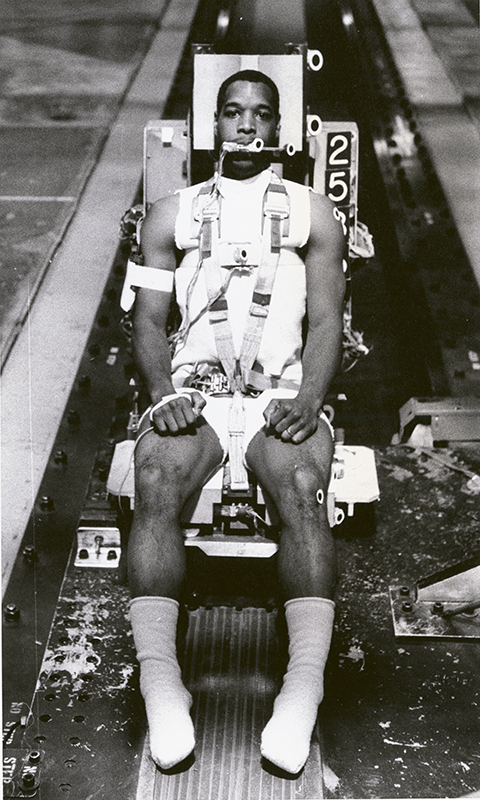 The man in this photograph, Air Force Captain Brian Woodson, is a volunteer for an experiment researching the affects of ejection seats on humans. According to an article that goes with the picture, these experiments came about as a result of fatal accidents occurring during ejections from aircraft. The goal of this project was to provide data that could produce a “smart” ejection seat that would steer itself with the use of a built-in computer. Woodson was one of ten volunteers, who sat in the “impulse accelerator”, which stops the chair with a force of around 30Gs, or thirty times the force of gravity. This photograph was taken on December 18th, 1984. 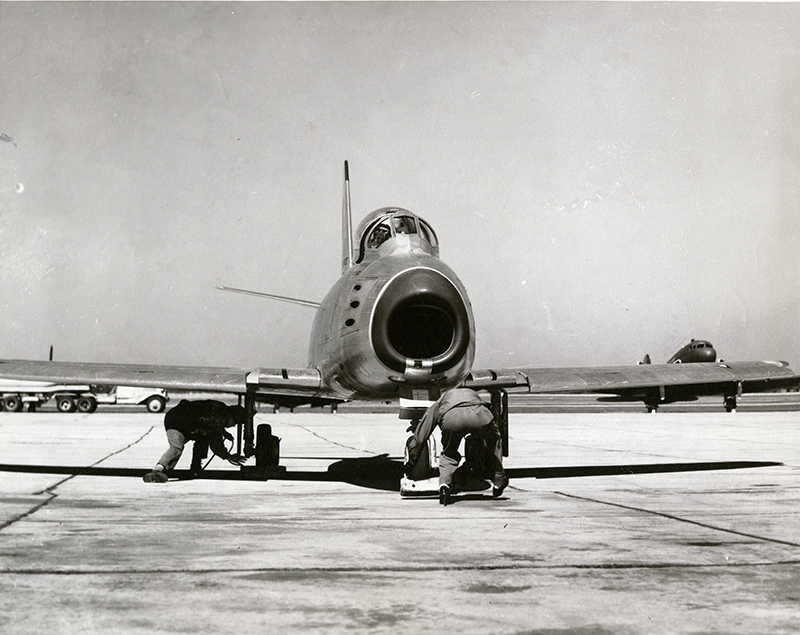 This is an F-86 from the 97th Fighter Squadron, based out of Wright Field. This squadron was a part of Air Defense Command.

The next group of photographs show some of the many aircraft accidents that occurred in and around Dayton over the years. 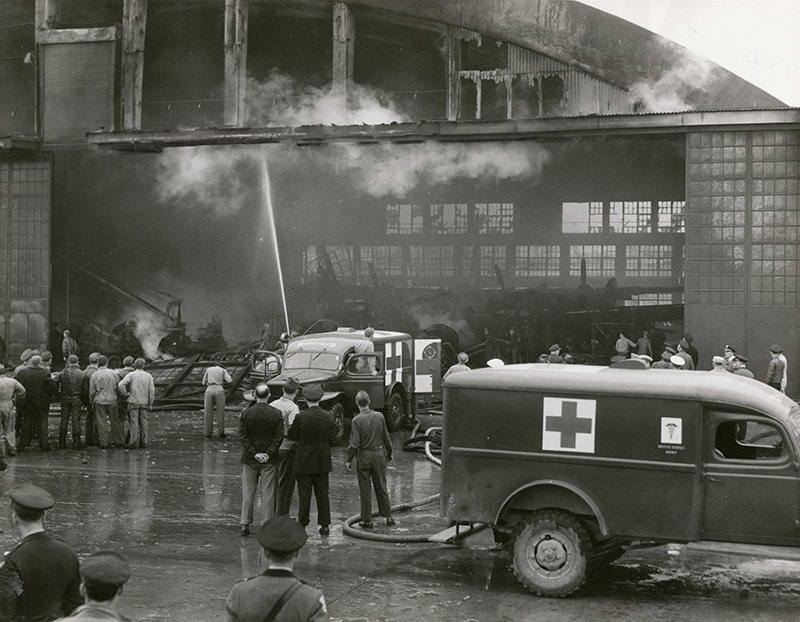 This picture was taken on March 6th, 1945, when a C-60 transport crashed into the No.4 hangar at Wright Field and exploded, setting fire to both the hangar and several aircraft inside. 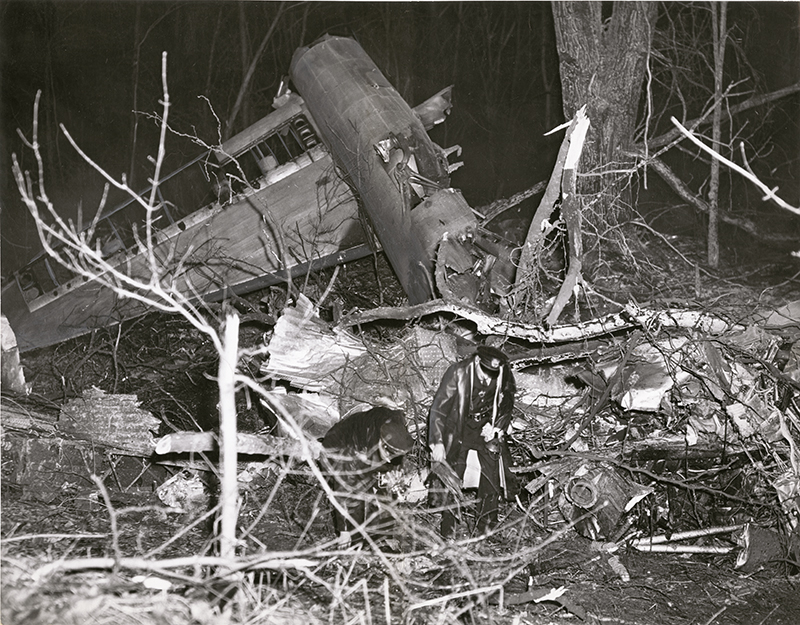 This is the wreckage of a B-17 that crashed three miles north of Patterson Field. The three crew members were killed when the bomber crashed.

Here is another picture of the 1947 B-17 crash. In this picture you can see several oxygen tanks, part of the landing gear, and what appears to be a seat. 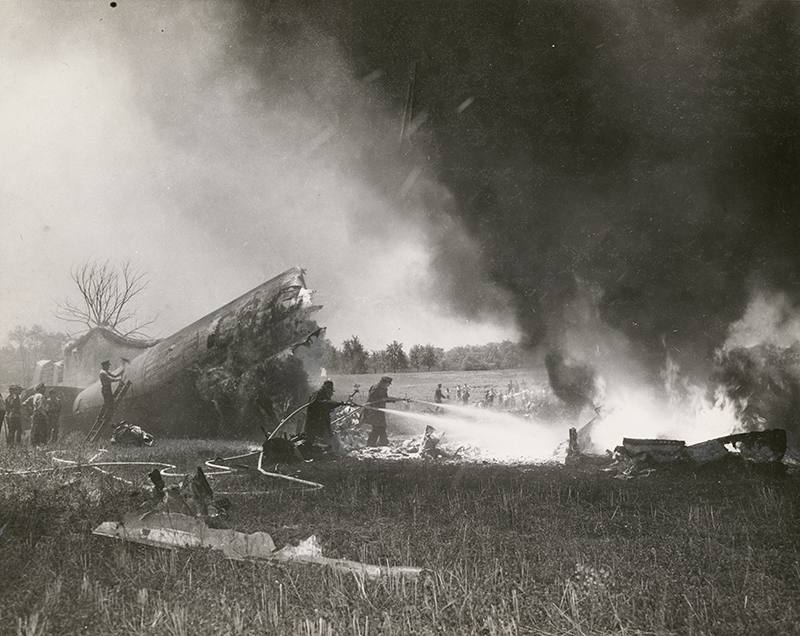 This crash occurred on May 22, 1947 and involved a C-97 cargo plane which crashed near Wright Field. Five crew members on board were killed. 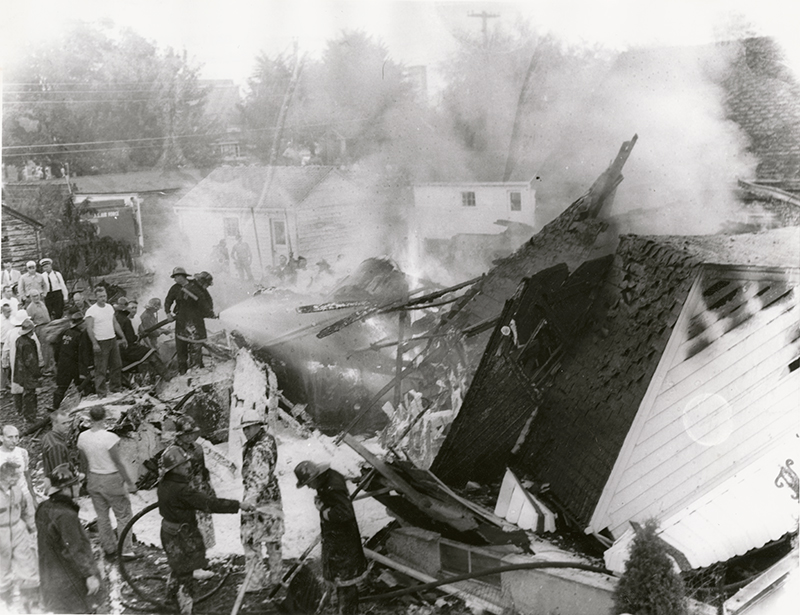 This accident occurred on September 24, 1957 and involved a B-26, a World War II-era medium bomber. The bomber crashed into a house on Tuttle Avenue in East Dayton. Both of the pilots were killed, as were two people who were in the house at the time of the crash. 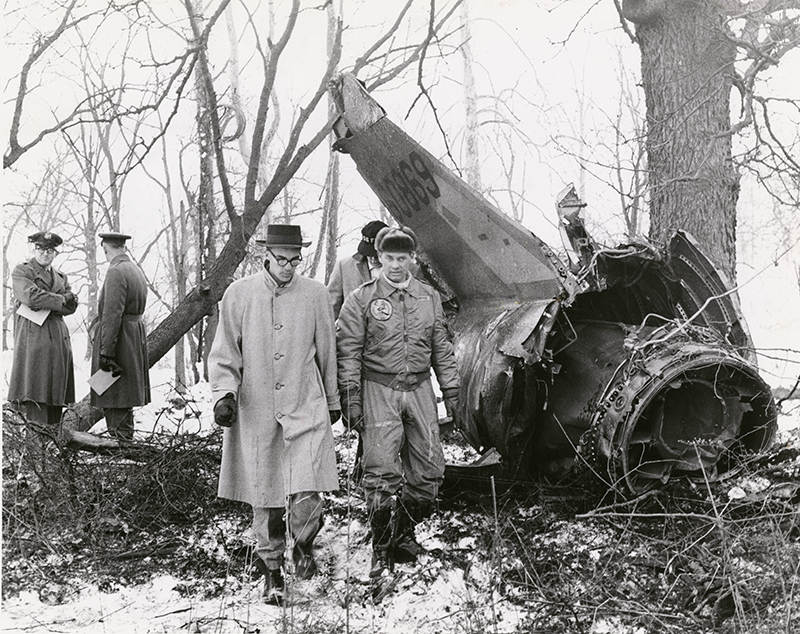 This is what remains of an F-104 Starfighter from the 56th Fighter Squadron that crashed near Valley pike. This crash caused an investigation to be launched, because the pilot, Lt. Col. Alston L. Brown (CO of the 56th FS), ejected from his disabled aircraft but did not survive. According to an article on the event, the automatic release that should have separated him from the seat did not engage, so he could not open his parachute. Brown’s body was found still in the seat about a quarter of a mile from the crash site. 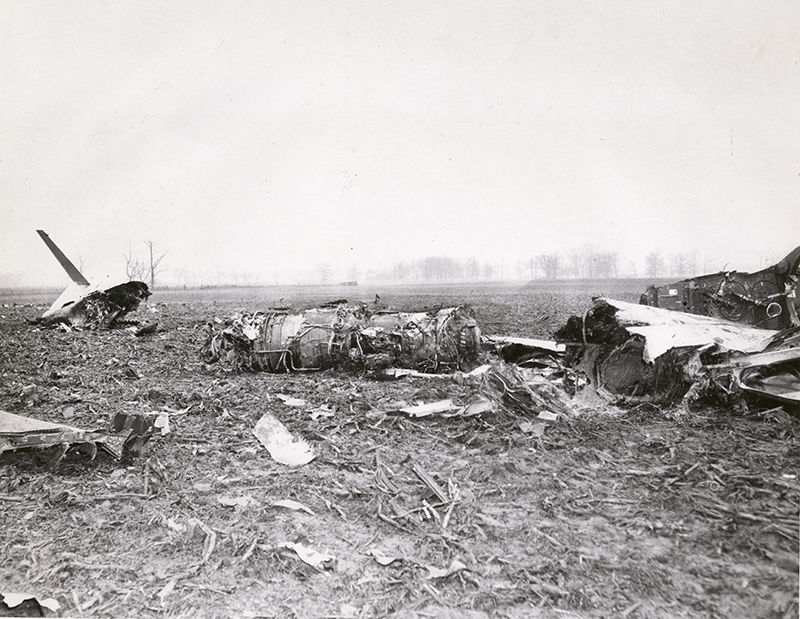 This is the wreckage of an F-101B Voodoo that crashed near Springfield on February 9th, 1960. Fortunately, in this case, the pilot successfully ejected from the aircraft and survived. 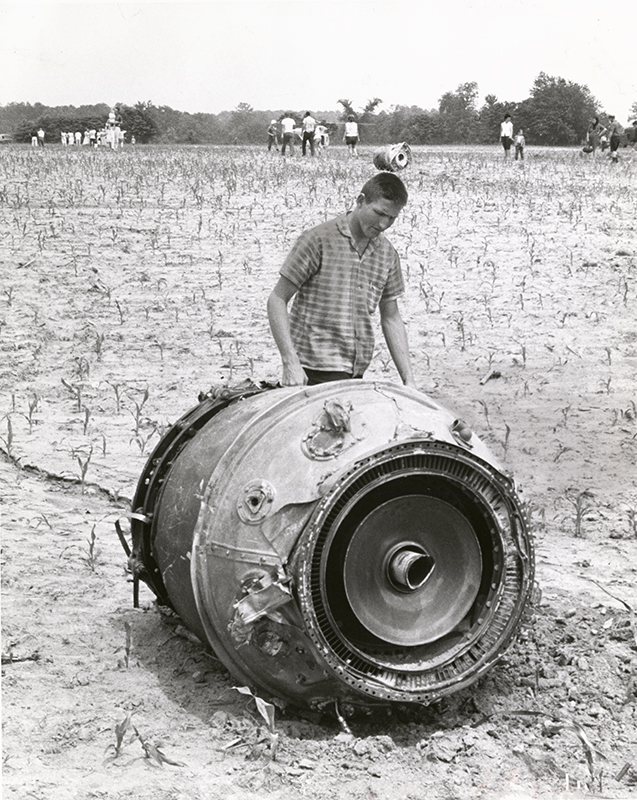 This engine was part of a jet fighter the crashed on June 12th, 1965. The caption on the back of the picture does not say what kind of aircraft it was that crashed. 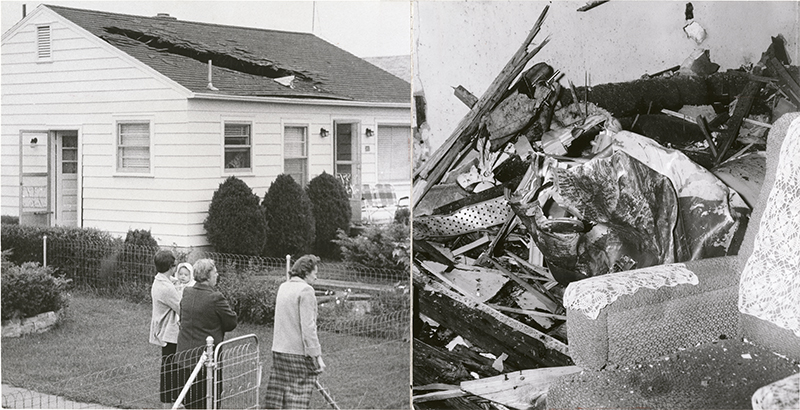 This was a somewhat strange accident which occurred on October 14th, 1959. A T-33 jet trainer began having engine problems. In an effort to make it back to Wright-Patterson, the pilot tried to jettison the wing-tip fuel tanks to lighten the aircraft. One of the fuel tanks, weighing some 1400 pounds with fuel, happened to fall on the Lanning residence. The tank went through several walls and killed the family dog, Puddles. 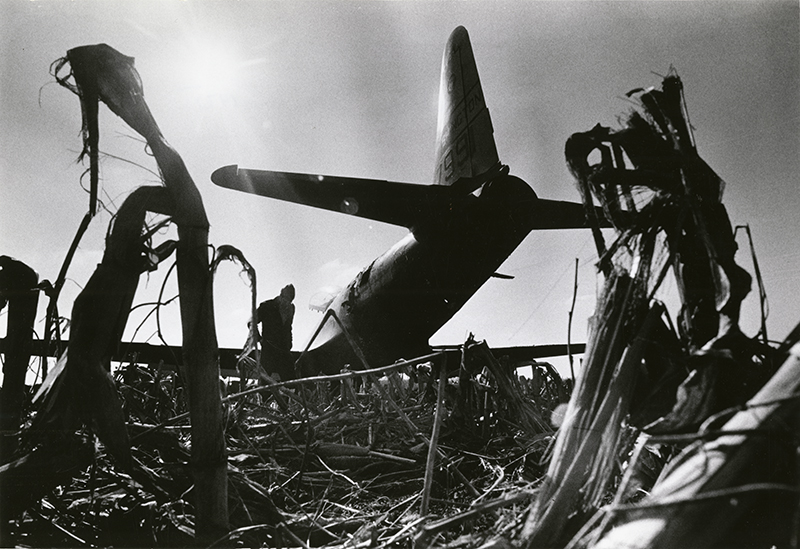 This is a T-33 trainer that crashed landed near Haddix Rd. in Clark Co. Judging by the hole in the side of the fuselage, it looks as if the aircraft might have had engine problems. 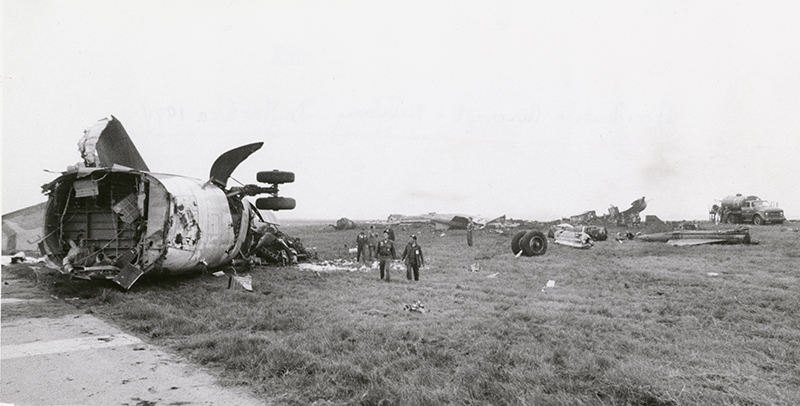 This is a B-52 from the Strategic Air Command that crashed on May 30, 1974. All seven crew members survived the crash without serious injury.