Today is Aviation Maintenance Technician Day, a day of recognition, observed on May 24, that recognizes the efforts of aviation maintenance professionals. The date was chosen in honor of the Wright Brothers’ mechanic Charles Taylor, with whose birthday it coincides. 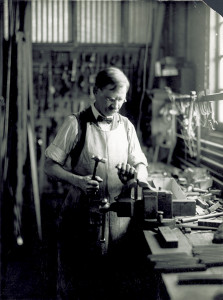 Charles Edward Taylor was born on May 24, 1868, in Decatur, Illinois. While he was still quite young, his parents moved the family to Lincoln, Nebraska. While Taylor eventually completed high school, he was forced to quit school temporarily in order to help support his family. He worked at a variety of newspaper and printing jobs which brought him into contact with machinery. Taylor showed great aptitude with machinery. He also worked briefly as a surveyor for the City of Los Angeles, a place that would hold great significance for him later in life.

Charlie Taylor’s introduction to the Wright Brothers began with his marriage to Henrietta Webbert of Kearney, Nebraska, in 1894. Her family was close to Bishop Milton Wright (the Wright Brothers’ father) and he apparently encouraged Taylor to seek work in Dayton. In the 1890’s, Dayton was considered an industrial town where good technical workers could always find employment. The depression of that same decade forced Taylor’s in-laws to move to Dayton in search of work. Charlie Taylor and his young family joined them in 1896.

Taylor worked for several Dayton manufacturers and even owned his own bicycle shop at one point. He also struck up a friendship with Orville and Wilbur Wright and subcontracted work from their bicycle shop. In 1901, the brothers offered Charlie a job managing their shop and doing repairs. Taylor excepted their offer and, by 1903, became actively involved in the Wrights’ work towards powered flight.  The brothers were unable to get the engine they needed for their airplane built by any conventional manufacturer. The Wright Brothers turned to Charlie Taylor and he designed and built them an engine. This engine was the engine that powered the Wright Brothers’ historic flight at Kitty Hawk, North Carolina, in 1903. 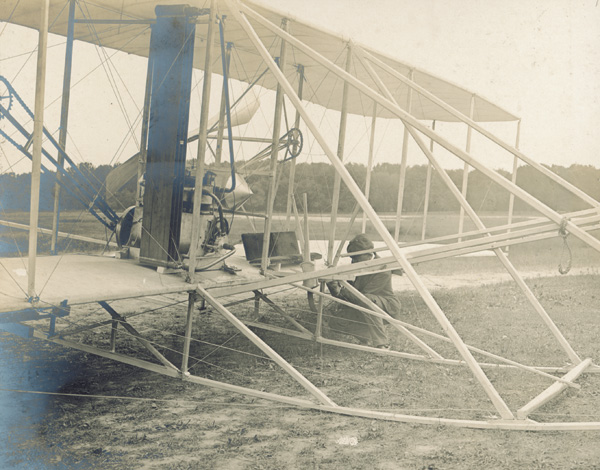 Taylor’s significance was downplayed in the event, but the Wrights consistently showed their appreciation and affection towards Taylor and his family. Charlie Taylor continued to work with the Wrights, most notably designing a plane with them for the US Army. In 1911, Taylor left the Wright Brothers employ and assisted Cal Rodgers in his cross country flight. It was during this flight that he moved his family to Los Angeles, California. Henrietta Taylor, his wife, was not well and it was hoped that her health would improve in the West. However, by the autumn of 1911, Charlie Taylor was back in Dayton. During this time he did some work with the Wrights and enjoyed a continued friendship with Orville Wright until Wright’s death in 1948. 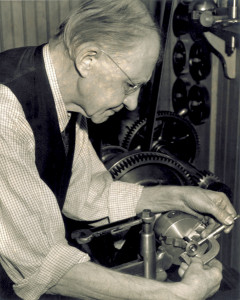 Charlie Taylor checking an engine part on the half-scale reproduction of the 1903 engine he built for the Edison Institute (now Henry Ford Museum and Greenfield Village), 1937. (photo ms1_21_4_13)

There are several gaps in Charlie Taylor’s history during the 1920’s and 1930’s. It is known that he suffered a severe depression brought on by the permanent hospitalization of his wife in a mental hospital. In 1928, Taylor moved back to California and lived quietly. It is known that he sought work but, ironically, had a difficult time finding work in aviation due to his age. Taylor enjoyed a brief respite when he was hired by Henry Ford to build a model of the first airplane engine for Ford’s museum at Greenfield Village in Michigan. The time seems to have been a high point for Taylor.

After that, Charlie Taylor slipped into relative obscurity until the death of his friend, Orville Wright, in 1948. Wright left Taylor an annuity of $800 a year. A fair sum of money at the time, it soon proved inadequate in helping Taylor meet his needs. As Taylor’s life drew to a close, he was cared for by family friends. When the health of his main caregiver, Mrs. Shafer, failed, Taylor became a charity case at the County Hospital in Los Angeles, California.  When it became known that this significant figure in aviation was unable to support himself, those who made their livelihoods in the aviation industry came together and created a fund for Taylor’s support. He was soon moved to a private sanitarium where he died in January 1956.

This biographical sketch comes from the finding aid for MS-286: Howard DuFour Collection.