Thanksgiving at Base Hospital No. 18, Bazoilles-sur-Meuse, 1918

On Thursday, November 28, 1918, Americans celebrated Thanksgiving, and there was much to be thankful for indeed.

Men and women in many other nations were probably feeling quite thankful around that time as well! The armistice, signed two weeks earlier on November 11, had formally signified the end of the “Great War” (World War I), after four long, terrible, and deadly years of fighting.

Many military units remained in Europe, however, including the American personnel of Base Hospital No. 18, which had been stationed at Bazoilles-sur-Meuse, France, since September 1917.

We have a menu from their Thanksgiving feast on November 28, 1918, from the Alice G. Carr Papers (MS-135). Besides the list of food to be served at the meal (an important part of any so-called menu!), the document also contains a number of other features, including:

As for the food, here is what was to be available at Thanksgiving dinner:

What a spread! Even the “hard sauce” and “demi-tasse,” which sound a bit daunting but must have been quite a treat. Hard sauce is a dessert sauce made from butter, sugar, and flavoring (frequently liquor, hence “hard”). And demitasse (French for “half cup”) refers to a coffee commonly served in a small cup, such as espresso.

You can view the original menu in the images below. Click on each image to view a larger version of it. 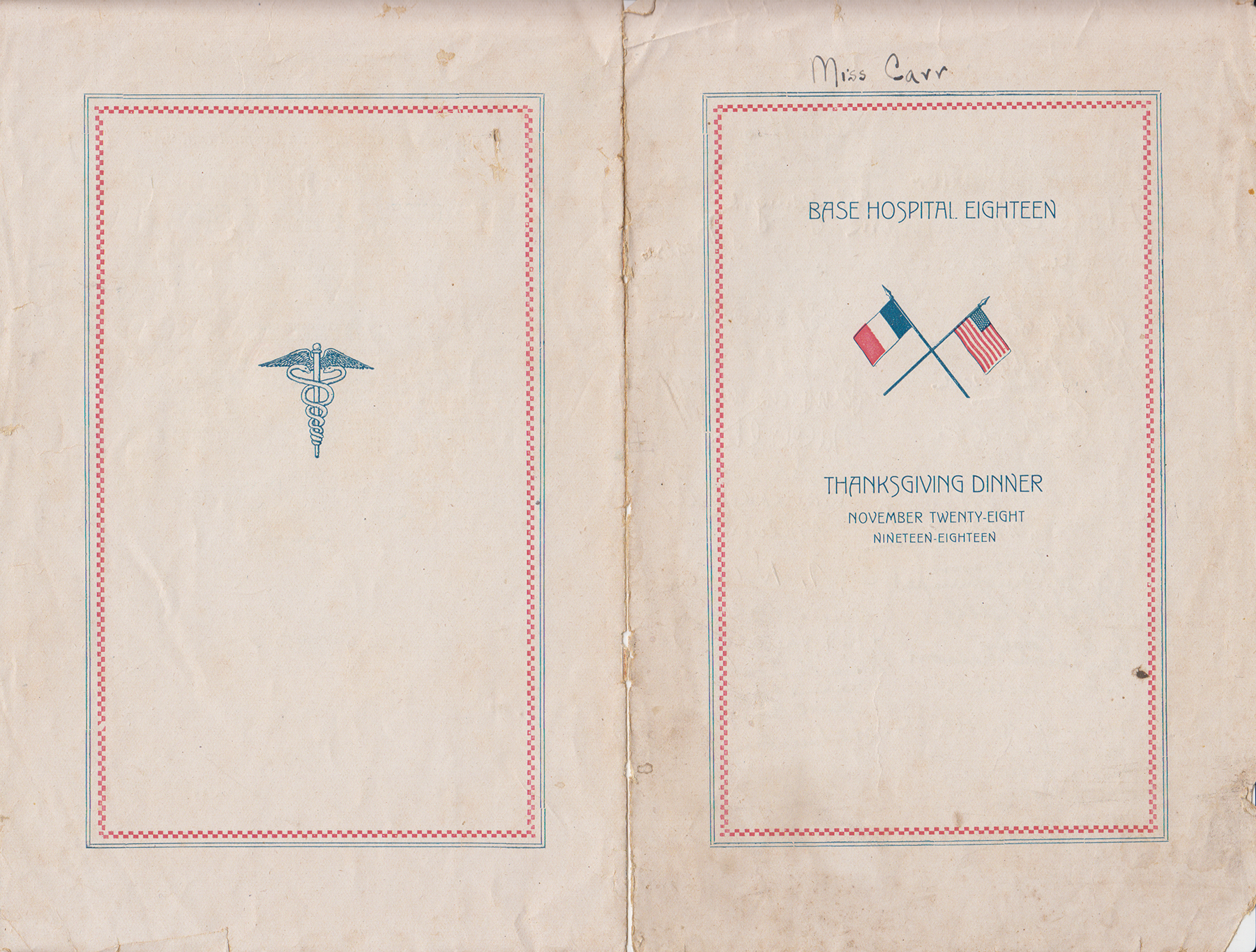 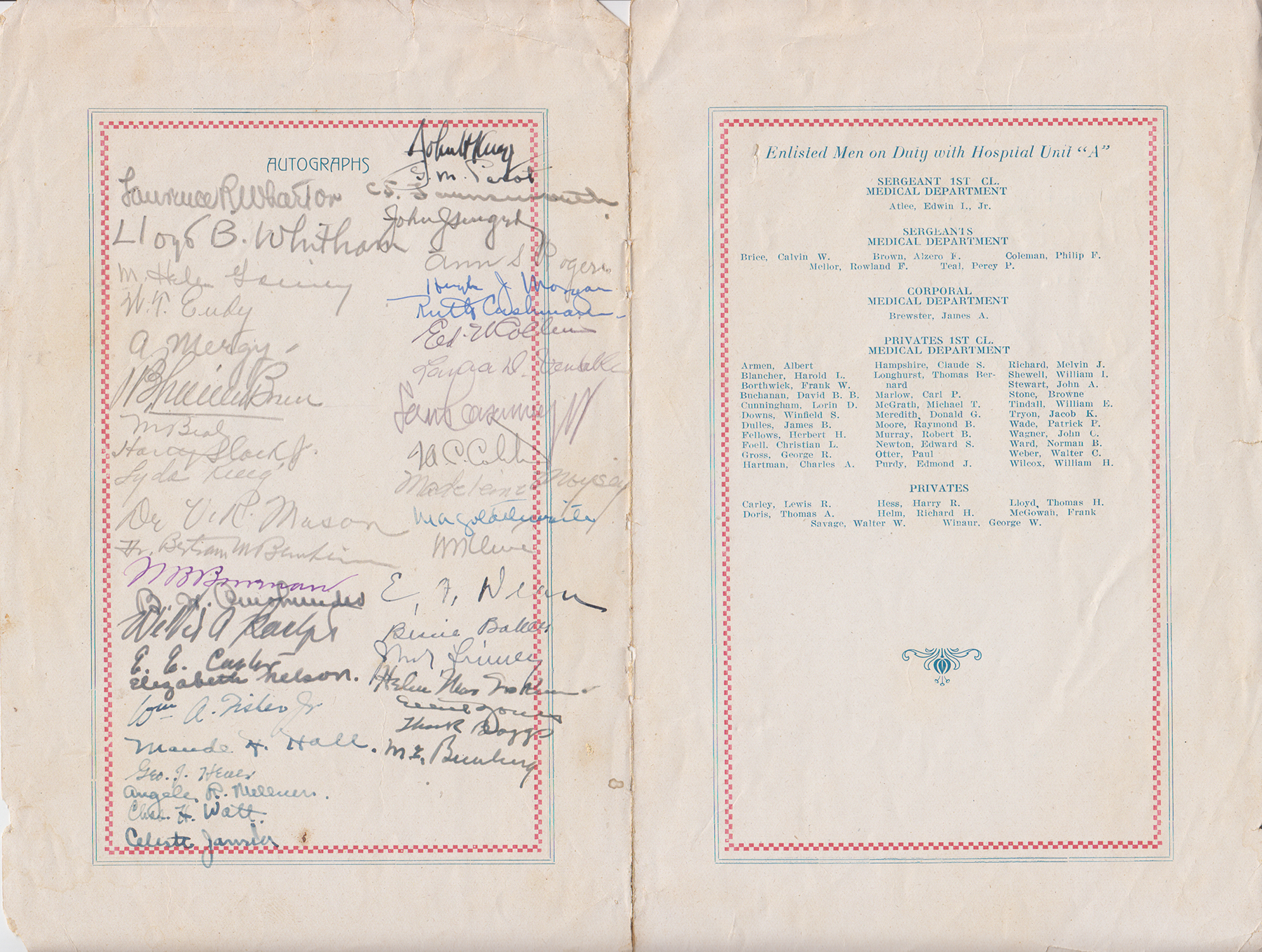 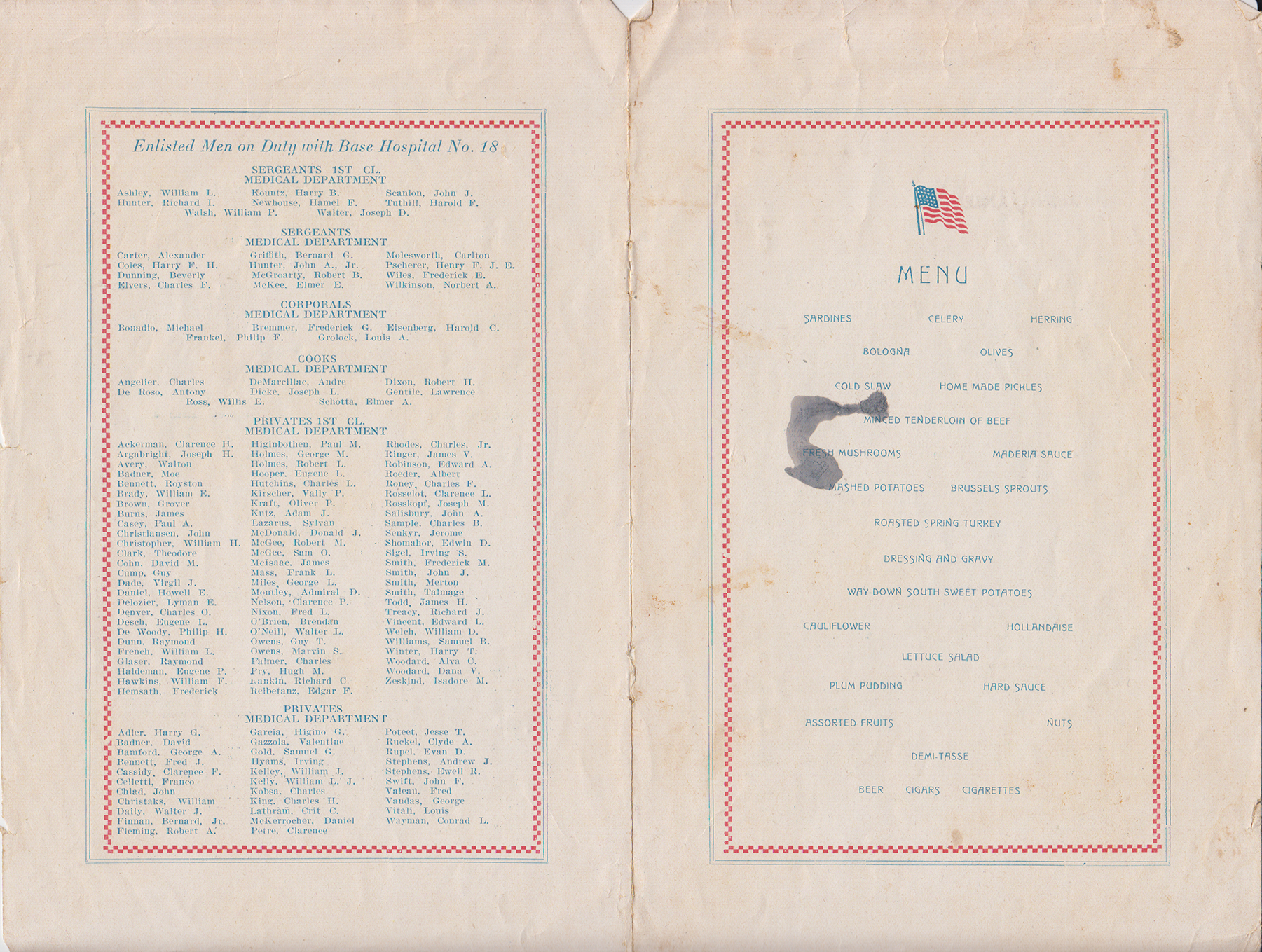 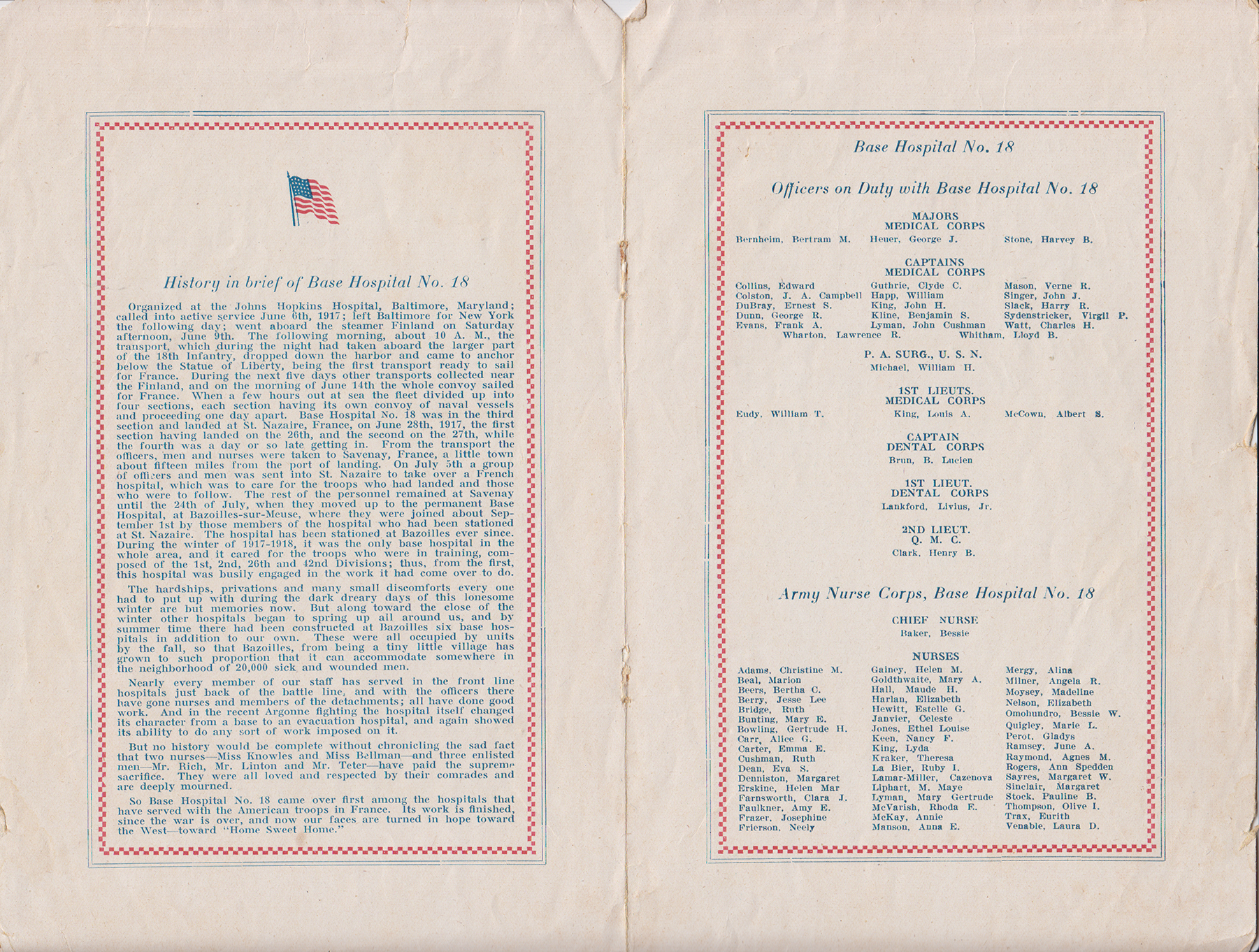 The following is the history of Base Hospital No. 18, as printed in the menu. Note the last line: “Its work is finished, since the war is over, and now our faces are turned in hope toward the West toward ‘Home Sweet Home.'” What a cause for thanksgiving!

History in brief of Base Hospital No. 18

Organized at the Johns Hopkins Hospital, Baltimore, Maryland; called into active service June 6th, 1917; left Baltimore for New York the following day; went aboard the steamer Finland on Saturday afternoon, June 9th. The following morning, about 10 A.M., the transport, which during the night had taken aboard the larger part of the 18th Infantry, dropped down the harbor and came to anchor below the Statue of Liberty, being the first transport ready to sail for France. During the next five days other transports collected near the Finaldn, and on the morning of June 14th the whole convoy sailed for France. When a few hours out at sea the fleet divided up into four sections, each section having its own convoy of naval vessels and proceeding one day apart. Base Hospital No. 18 was in the third section and landed at St. Nazaire, France, on June 28th, 1917, the first section having landed on the 26th, and the second on the 27th, while the fourth was a day or so late getting in. From the transport the officers, men and nurses were taken to Savenay, France, a little town about fifteen miles from the port of landing. On July 5th a group of officers and men was sent to St. Nazaire to take over a French hospital, which was to care for the troops who had landed and those who were to follow. The rest of the personnel remained at Savenay until the 24th of July, when they moved up to the permanent Base Hospital, at Bazoilles-sur-Meuse, where they were joined about September 1st by those members of the hospital who had been stationed at St. Nazaire. The hospital has been stationed at Bazoilles ever since. During the winter of 1917-1918, it was the only base hospital in the whole area, and it cared for the troops who were in training, composed of the 1st, 2nd, 26th and 42nd Divisions; thus, from the first, this hospital was busily engaged in the work it had come over to do.

The hardships, privations and many small discomforts every one had to put up with during the dark dreary days of this lonesome winter are but memories now. But along toward the close of the winter other hospitals began to spring up all around us, and by summer time there had been constructed at Bazoilles six base hospitals in addition to our own. These were all occupied by units by the fall, so that Bazoilles, from being a tiny little village has grown to such proportion that it can accommodate somewhere in the neighborhood of 20,000 sick and wounded men.

Nearly every member of our staff has served in the front line hospitals just back of the battle line, and with the officers there have gone nurses and members of the detachments; all have done good work. And in the recent Argonne fighting the hospital itself changed its character from a base to an evacuation hospital, and again showed its ability to do any sort of work imposed on it.

But no history would be complete without chronicling the sad fact that two nurses—Miss Knowles and Miss Bellman—and three enlisted men—Mr. Rich, Mr. Linton and Mr. Teter—have paid the supreme sacrifice. They were all loved and respected by their comrades and are deeply mourned.

So Base Hospital No. 18 came over first among the hospitals that have served with the American troops in France. Its work is finished, since the war is over, and now our faces are turned in hope toward the West—toward “Home Sweet Home.”

This entry was posted in Collections and tagged holidays, MS-135, Thanksgiving, World War I, ww1centenary, WWI, WWI100. Bookmark the permalink.