Nellie Neukom to her daughter Lisetta in Michigan and her sister Evelene in Pennsylvania:

“My dearest Lisetta & the home folk too: I hope Evelene sent word to mamma. We have sent no word there—no way to do it. For the telegrams & letters were all uncertain we sent & a letter if started right could not reach her by today. And this is the day they are to sail. I hope they have a safe journey.

“Last night I slept better than any night since March 25th! And as soon as I sleep I will be quite myself again.

“Today I do hope to get a recent letter from Lisetta…

“Am wondering if Lisetta is happy in her new position [as a journalist in Battle Creek]—And if she is well. She was under a great strain & among strangers. From the first I feared she might have started for Dayton March 25, when the first news reached her paper. It was a relief to know she was where she was safe. And—she might not have been had she been outside the city limits! For she could not have entered the city first for flood & then afterward on acct. of Martial law.

“…We have to be inside the house at 6:30 P.M. and all lights out at 9:30. And this is wise. Now we have gas & perhaps Everett can see to write a little while before bed time. He works at The Delco all day—And is making a lot of money selling his flood prints. [Check out Everett’s flood photos from March 26 & March 28.] (Those he has to make Sat. P.M. & Sunday.) People come here in droves to buy them & first Edward sold them & now I attend to that for him. As soon as he can get enough ahead he plans to make some for me to send away. But he wants to sell all he can before the post-cards get on the market. He has paid for the new camera ($50). They took his old camera in partial payment too. He has a magnificent outfit now.

“Edward went to Jamestown [N.Y.] yesterday & expects to be home Friday or Sat. He was a great help and comfort, while I was sick. Has been to business, but two days since the flood. 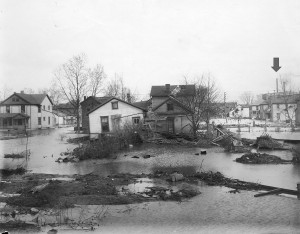 Platt Iron Works building can be seen in the upper right of this photo (see arrow). A frightful walk through mud and slime, indeed! (ms128_2-7-23)

The walking to The Platt is frightful through mud & slime & climbing over debris—(The cars do not run.)—And then the office bld. was flooded & is cold & damp. (No heat). So, I am glad he is away from that damp building—Likely will not need to go to the office until Monday the 14th & by that time it ought to be dried out some!

“I purposely do not write flood details! For I can’t think on that subject yet awhile. Will send a book Everett bought! It shows some!

“You see by the writing what a nights sleep did for your loving mamma and sister Nellie. 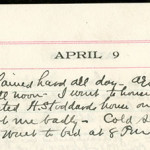